I nearly killed Hubby the Un-Gardener

If you recall my last blog where I proudly presented little red goodies from my winter greenhouse, well since then things haven’t gone according to plan.

The tomatoes were great – oh so sweet and yum, Oh how I missed you, fresh tomato.  It doesn’t hurt that this is my all-time favourite tomato.  It’s a wee cherry style called Strawberry Tomato.  They were being sold in the local supermarket last winter for a really good price so I couldn’t resist a punnet of summer in the middle of winter. I don’t normally buy produce out of season (if I have to buy at all).  They were so nice I kept the seeds. 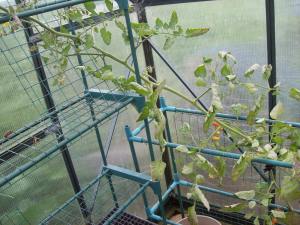 Strawberry Tomato - a bit spindly but loaded with tomatoes and flowers

So back to the outcome of the last blog – the tomato was so small I wasn’t going to cut it into quarters to share with everyone – but I’m not that mean that I wasn’t going to go halves with Hubby the Un-Gardener, same with the pepper, so I put them both aside to share secretly when the kids weren’t about.  Good news is the rest of the tomatoes seem to be ripening up thick and fast so maybe if the kids are lucky they may get a taste.

Now the history with the pepper plant is:  It is of the Cornos variety and had been growing in the garden all summer as I had grown several from seed and when summer turned to autumn I couldn’t bear to just leave it to die so I dug it up, along with an eggplant and a plant that came from an envelope with the dubious handwritten label “good little chillies”.  I suspect they are jalapenos but I can’t be sure.  I re-potted them into buckets with holes in the bottom and moved them into the greenhouse.

Cornos Pepper with a split personality

In the garden, the Cornos peppers were long and mild with a slight kick and a really sweet flavour.  So it was with great excitement that the other night after the kids had gone to bed I halved the tomato and savoured the sweet juicy flavour, and then sliced open the pepper.  I should have been alerted to the fact something was amiss when the fruit only yielded 3 seeds and was smaller than the summer ones.  I gave half to Hubby the Un-Gardener who foolishly – yet trustingly popped the whole thing in and started to chew.

I was just about to nibble on my half, as I wanted this unseasonal summer experience to last.  I was stopped in my tracks by breathless gasps from across the room “IT’S HOT!!”  As Hubby the Un-Gardener bolted past me and into the kitchen where he proceeded to gulp down 2 litres of milk.  Still feeling internally scorched, he settled down to bed, wondering if it would be better to make himself throw it back up again to save his poor body from having to process it further.  While contemplating this great conundrum, he rubbed his eye, scratched his head and itched his butt.  Moments later he leaped out of bed like a rocket and jumped into the shower to sooth the burning sensation spreading all over him where ever he touched. 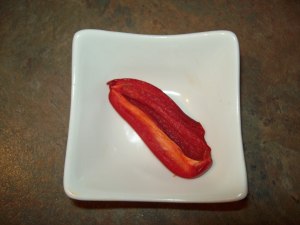 Too hot to handle

Watching all this frenzied activity, I looked at my half still in my hand and thought, “I’ll just pop this in the fridge” and we ate a tiny bit off it for tea tonight in a yummy pumpkin and bacon risotto. 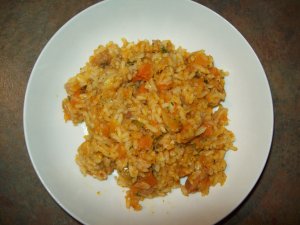 I have no idea why something that was mild in the summer could be so searingly hot grown in a greenhouse in the winter.  Oh well – lesson learnt for next time:  Caution winter peppers can be hot!

Come again soon – I’m about to reach for my seed packets and start the gardening journey all over again.

← Splashes of red in a winter greenhouse – and a significant amount of rambling.
It can’t be winter – it’s not cold enough →