This is supposed to be all about vegetables in my veggie garden, with exciting stories about broccoli and riveting yarns about leeks and tantalising tales about my tomatoes.  But this is being hijacked by animals.  I’m giving the impression I am a savvy rural type with an extensive menagerie.  I need to clear things up; I am not a savvy rural type.  I have some well-worn red band gumboots that are so well worn they have sprung a leak, but that is about as far as it goes.  I’m a gardener not a farmer.  Sarah the Gardener – Not Sarah the Farmer!

I was going to tell a tale of woe about my broccoli – but it’s really not that interesting.  In the last season I thought I’d planted heaps of the stuff, but it turned out to be cauliflower!  I had heaps of cauliflower – all ready at the same time!  We don’t eat that much cauliflower.  I was aiming for enough to fit into our dietary requirements and was happy with that.  But I wasn’t happy with hideous amounts – we were never going to eat them all, so I made heaps of piccalilli with the zucchini that was also going mad.

The problem of the cauliflower was solved, but not the broccoli; we still didn’t have any – so this season I planted more only to have them turn into more cauliflowers.  So fed up with the whole situation I ignored the cauliflower row in disgust only to discover at the point of flowering the seedlings had somehow got mixed up and so there was broccoli, only I missed them!  I planted more, but the seeds weren’t all that fresh – don’t let broccoli seeds get too old because the germination rate is really poor.  So the single surviving, guaranteed broccoli seedling was planted with tender loving care and was doing well, only to be perfectly ready while I was out of town.  On my return I was disappointed to find lovely yellow flowers.  Missed it again.  I can’t remember the last time I ate fresh broccoli. Maybe next season.  And there ends my rather boring tale of my incompetence with broccoli. 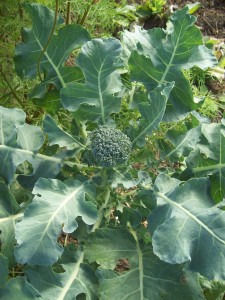 Broccoli before I went away

Broccoli when I came home

However things got a little interesting again today with the animals – a lot more interesting than going on about broccoli and definitely a whole lot cuter than broccoli.   Tim the Helper went out to feed the chickens before school and came inside with a garbled tale of a half dead chick in the coop, but it wasn’t one of the babies.  This made no sense what so ever, so I went out with my pyjamas tucked into my leaky red band gumboots to find out what was going on. 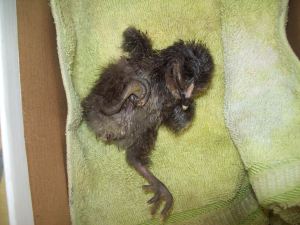 And sure enough and against all odds another chick had hatched – over a week after its siblings.  But its siblings were its down fall – first thing in the morning they were off out to play in the dirt and Mum had no choice but to supervise the adventurous chicks and leave the newly hatched baby in the nest.  By the time I got to it, it was so cold and despite only being at most twenty minutes out of the egg, I don’t think it would have lasted much longer.  The heart beat felt quite strong and so this little fella was definitely a fighter, so I warmed him up (I keep referring to him as a boy which is strange because I’d rather he was a she – will try the feather sexing thing tomorrow as they are still too small to tell).  The feathers dried out and turned fluffy and he has been my constant companion all day.  I even took him to a meeting because if I left him at home Toast the Cat may have eaten him.

I tried to take him to his Mum, but she wasn’t interested and just dooked him on the head.  So for the next few weeks I’ll be Sarah the Chicken Mum.  The first challenge will be to get the little fella through the night.  He’s still really wobbly on his feet, but I’ve made a nest in a shoe box with a hot water bottle, and old towel and a teddy bear substitute broody chicken. So far so good.

Come again soon – hopefully I will get a break from all the animals and get some gardening done!

← I seem to be a creature of habit, and this is causing bean issues in my garden.
When gardening isn’t gardening at all →