Cutting down the grass

With only four days of summer left the sun decided to show his face – hopefully as a result of guilt and shame for his lack of attendance during the last three months.  Yesterday was a wonderful day, all hot and blue skies and cicadas cicading and a day where the garden just beckons “come and play with me!” And that was exactly what I did. 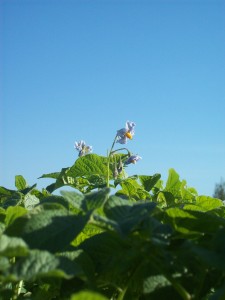 With an ever increasing list of projects in my head, I took one look at the garden and knew exactly where to start:  mow the grass.  I feel like I have spent so much time this summer mowing the grass or waiting for it to dry out so I can mow it.  Normally at this time of year it is a shadow of its former spring self – all brown and dried with dusty patches where I have walked over it too much on my way to get tomatoes or herbs.  It barely needs mowing at all!  This year it is still lush and long and full of vigour that is reminiscent of the early days of spring. 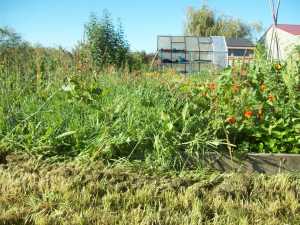 It's not as bad as it looks

With all the long grass everywhere the patch just seems overwhelming – like a big weedy overgrown mess!  A quick-ish blat about with the lawn mower restores a sense of order and reduces the enormous amount of work originally perceived to the more manageable reality of the situation.

Although this mowing wasn’t without its ups and downs.  Our mower is a little trooper.  It is often asked to do chores that its wee budget body was not designed for.  It probably sits in the shed and daydreams about a small bit of grass out the back of a town house in the city!  But it is our little reliable rural mower and despite having numerous components fall off, he still pushes on through and gets the job done.  I don’t know what all those bits were for because he still works perfectly well?!

But after shedding the most recent detritus, Hubby the Un-Gardener decided to “take a look.”  Although he’s not all that mechanically minded, he has a go, and pretty much always sorts things out.  He once took the gear box of the ride on mower apart and fixed it by taking photos with his iPhone every step of the way, googling the problem when he found it and then reassembled it by looking at the photos in reverse order.  He’s very resourceful!

So I hauled out the freshly made over mower only to find it wasn’t working very well at all, so Hubby the Un-Gardener suggested I use the ride on mower as the beds had been  designed to be far enough apart for it to fit.  But after a couple of sweeps I stopped it and got off.  I hated it.  It was too clumsy.  I wanted my old battered mower.  I understand that mower, I know just how far I need to go around the trailing pumpkins without shaving them off, it fits underneath the leaning fennel that has gone to seed, it gets close to the beds and I like that mower.

A clean cut under the leaning fennel

So Hubby the Un-Gardener sacrificed his Sunday afternoon in the sun to fix the old mower, and soon we were chugging up and down between the beds like old times – until we ran out of petrol…

Come again soon – with only a handful of days of summer left I intend to get the most out of them.

← When gardening isn’t gardening at all
So much for my hopes of an Indian summer – we’re having a weather bomb instead! →