The garden is fighting back and I have the black eye to prove it.

Its a hard life being a tomato

After months of being cruelly tied to a post the tomatoes broke free from their shackles with some kind of mob mentality.  In one day 12 of my 20 odd tomatoes one by one snapped their stakes in a bid for freedom.  Their escape was hampered by the fact that they are bound to the earth by their own roots.  They were like lemmings taking an ill-fated plunge in what they believed would be a better life.

I mean when you think about it the life of a tomato plant isn’t exactly a bed of roses.  After an early start in a cosseted environment, within the warm and security of the greenhouse, their every whim is met.  Then comes the day when they are thrust out in to the cold with no hope of escape as they are buried up to their necks in the cold claggy soil of spring, that smells a little of poo as the bed had not so long ago been enriched with bags of equine offerings. 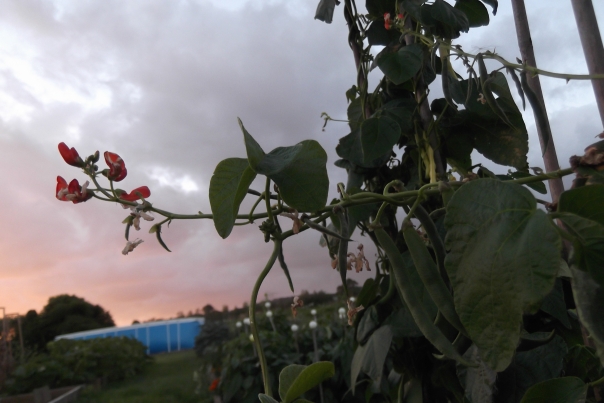 “A rose by any other name would smell as sweet” – not if it is a scarlet runner bean hiding behind a different moniker. I thought I’d banned that kind of bean from my garden!

Then as they grow their armpit growths are ripped out without so much as a sedative to dull the pain. Into adolescence their typical wayward behaviour is control by physical restraint. Not just once, but several times as they are tied to the post like some kind of kidnapped seafarer in a pirate drama.  They can’t even escape the constant buzzing as the bees hound them and steal their pollen!  Even the supply of tomato food is hit and miss as the festive season distracts the responsibilities of the gardener.  As they reach towards the sun like it’s some kind of deity offering their only salvation the gardener comes again and removes whole limbs exposing their nether regions to all and sundry.

The greatest indignity comes when the gardener comes and steals their babies!!!! So they can eat them!  Its no wonder my tomatoes made their bid for freedom.  Or maybe they were pushed. For days and weeks now the wind has been egging them on, whispering seditious lies, telling them to loosen their shackles – suggesting there is more to life and they should let go and check it out.  But the wind was full of lies and all they ended up doing was falling flat on their face!

The wind has been whispering to the cucumbers too, but they have more sense than to believe the lies. So they wrap their tendrils around the nearest thing and hang on for all their lives are worth!

I do care about my tomatoes, and am distraught with the thought that they were lying on the ground, looking all broken.  My reaction was to act immediately and so I jumped in the car and raced off to get reinforcements in the guise of new posts, stronger posts.  Only the best will do for my plants.  I headed straight for the strong metal warratah posts.  I got a bit of a shock!  Ok so maybe the second best for my plants, not with prices like those.  So I settled on two packs of plastic coated stakes with three in each.  One pack coincidentally happened to be the exact same price as one warratah and I had half a dozen plants down and sadly money doesn’t grow on trees.

Standing proud and tall once again!

Once home I began my first aid and pulled the first couple of plants back onto their feet and lashed them tightly to the post.  I think they were happy to be vertical again, although they looked a little abashed for attempting such a foolhardy endeavour, or was that just bashed – by the wind.

However plant three – I think it was an Oxheart, had a bullish unwillingness to conform and as I tried push the stake into the soft soil, the metal bent under my efforts and unexpectedly snapped, smacking me in the face and sending my glasses flying.  I had to get the Joeyosaurus and Tim the Helper to help me find them as I couldn’t see to see!  Once my glasses were retrieved from the top of the tallest tomato a grabbed a new stake and carefully but determinedly plunged it deep into the earth and secured that plant to within an inch of its life.  That baby’s not going anywhere! 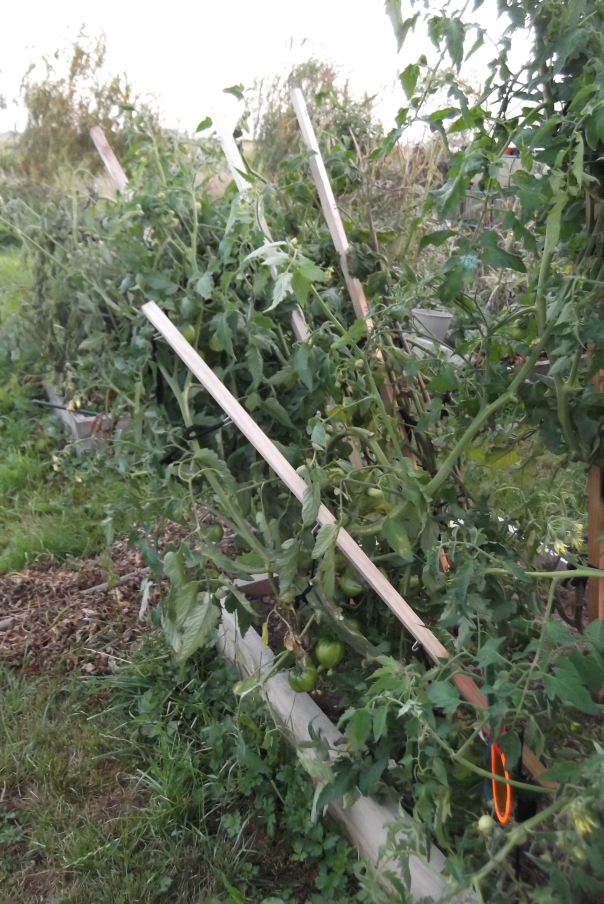 Seriously?! More going down!?! They are just like dominos.

Once all the stakes I have were in I looked about to see more plants had made the leap and where leaning all over the place like drunks at a party.  So back to the store for more stakes, and the good people there replaced the broken stake, because they didn’t think I looked strong enough to have used excess force!

Each gardening year brings its challenges.  Last year it was the rain in summer and this year it is the wind.  But all you can do is make the best of it to get through the season, learn from it and make changes so you won’t have to go through it again and wonder what challenges next year will bring.  Maybe next year won’t have any problems and it’ll be the perfect growing season.  One can only dream! 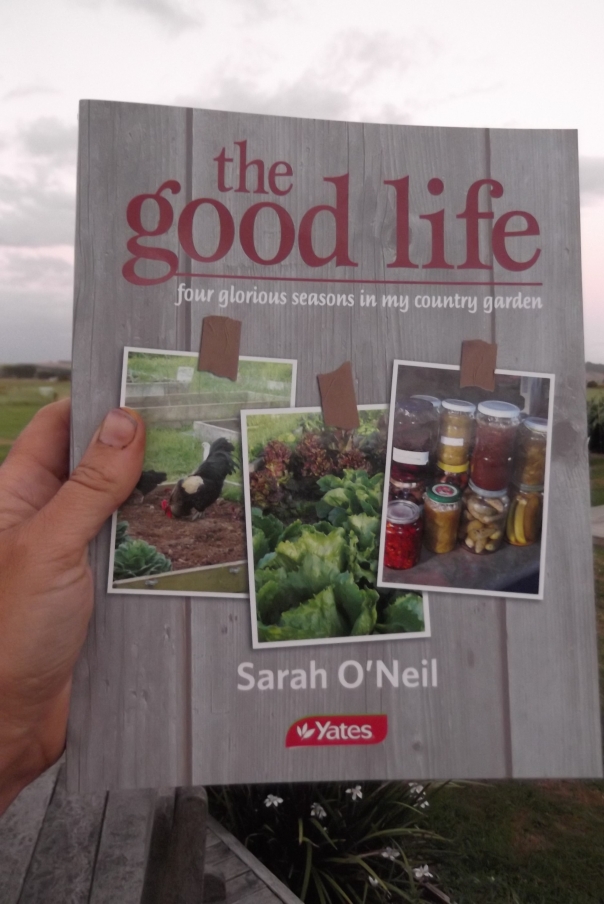 What I hold in my very garden stained hand is the most exciting thing: An advance copy of my book! It will be available in all good bookstores in NZ and Australia in March. It looks amazing!

Come again soon – the garden actually has good bits and isn’t the train wreck I’ve made it out to be!

← This summer is beginning to push me to my limits!
Finally order has been restored. →

29 Comments on “The garden is fighting back and I have the black eye to prove it.”