It’s quite funny because I seem to go on about the rain a lot and so anyone would be led to believe it is a very soggy autumn.  But alas this is not the case.  Since the seasons changed we have only had a couple of decent rainfalls and not really enough to undo all the damage of this summer’s drought.   The boffins have proclaimed that this rain will be the one to quench the soil and break ‘the big dry’ as it is now being referred to – however it’s not looking likely.  It is that annoying rain that gets things wet and makes gardening not so pleasant, but I can’t see any puddles forming.

The ground doesn’t look as dry, and there is still enough luscious growth despite the downhill slide towards winter

So – to clarify – it hasn’t been raining constantly.  I have done loads in the garden, in the blazing sun and working up quite a sweat – well I would have if I wasn’t a lady.  Ladies don’t sweat – they glow!  Well I was positively glowing.  The garden has been weeded to within an inch of its life; which wasn’t too hard as the dry conditions have kept most of the unwanted interlopers at bay.

I still haven’t managed to remove the summer plants that are on their last legs, but the way I see it – is if they are on their last legs, they are still standing so there is still hope.  Although I was forced to harvest the popcorn as some miserable creature had attacked it and eaten half my crop.  I have words that could be used to describe that unwanted varmit; however we are in polite company so I shall just refer to the thieving swine as an undesirable inconvenience.

Another task I had to tackle was sorting out the greenhouse.  Once all the spring seedlings had fled the coop I kinda abandoned the greenhouse, leaving it in a state of total chaos.  The spiders spun some pretty impressive webs and somehow through the weedmat and the sandy gaps between the paving stones some pretty healthy weeds were flourishing.  Seriously what is up with that?  It has been like a million degrees in there over the summer, with no water and yet they thrive.  Any plant I put in there in conditions that aren’t as harsh and are pampered like princesses are petulant primadonnas who will get in a huff and curl up their toes at the slightest perceived discomfort.

And the sad, tired old-before-it’s-time greenhouse is put into service one more time.

But the weather is changing and my autumn sowings – that have been basking in the gentle warmth of autumnal sun, needed a change of scene.  They needed to be in the greenhouse to protect them from the early morning chill that has crept upon us and has me looking for socks the minute I get out of bed.   So I moved them into the warmth where they will reside until I face the fact that summer is well and truly over and rip out the dregs of what was once a thriving, vibrant summer garden, and free up space for cabbages and cauliflowers and witloof.  I don’t even know what witloof is – but I’m gonna give it a whirl! 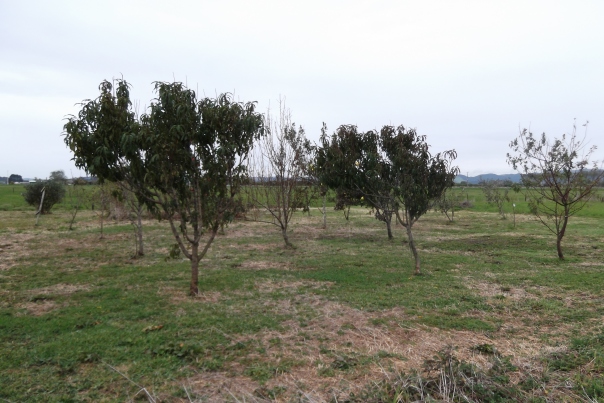 My orchard will be a shining example of good orchardness by the time I have finished with it.

When I planted my orchard, I decided the best place for it was at the far end of our property, so we would have an excuse to go to the far reaches of our land.  But sometimes the trek (it’s not actually that far) seems like too much effort and so my poor orchard has only really received intermittent attention.  Well this year that is all about to change.  I have decided I really need to fix this situation and take proper care of the trees I planted so they will bear me the best fruit.  With this new found enthusiasm for my trees I looked up what I needed to do and sprayed the peach leaves for peach leaf curl and pruned the plums – it’s a bit late for the required summer prune, but I figure it’s closer to summer than winter so close enough should be good enough.  Then I got all enthusiastic with my pruners and went around the whole orchard and removed dead and diseased wood which was really easy to see, as these were the branches without leaves.  I am so proud of my orchard efforts.

So things are ticking away nicely in my little horticultural paradise, but having said that there isn’t really much that needs doing.  It is quite a laid back season and it is a time to enjoy the fruits of my labours.  Although I do keep asking myself – surely there is something that needs to be done?

Hmmm…. maybe I should do something with these windfall quince….

← Who flipped the switch?
Summer is over… well… almost. →