Those pesky mice, I am sick to death of them and their meddling ways.  Well they have messed with me one too many times.

I seem to have almost eradicated them from my shed as only one of my bait stations needed refilling today, but they seem to have withdrawn from what was once their safe haven and have retreated to the greenhouse for a fresh attack.  Although it is a fool hardly last stand, as I am on to them.

Where are my onions?

I went out to check on my onion seedlings – which still aren’t up yet.  What’s could possibly be keeping them, I’m beginning to get impatient.  It’s not like there is anything to be scared of.  I am offering a perfectly lovely home for them to grow up in … well until I ruthlessly rip them out of the ground and eat them.  But that’s ages away so we won’t dwell on that too much.

Aside from seeing no onion seedlings, I also saw no pea seeds.  And I can completely verify the absence of pea seeds as there were holes in the seed trays where they had been dug up and stolen! The spinach seed tray had had another going over as well and now I am completely certain there were no seeds left at all.  This was the final straw…  I needed to take some immediate action. This situation could not go on or I’ll never get any peas or spinach in my winter garden. 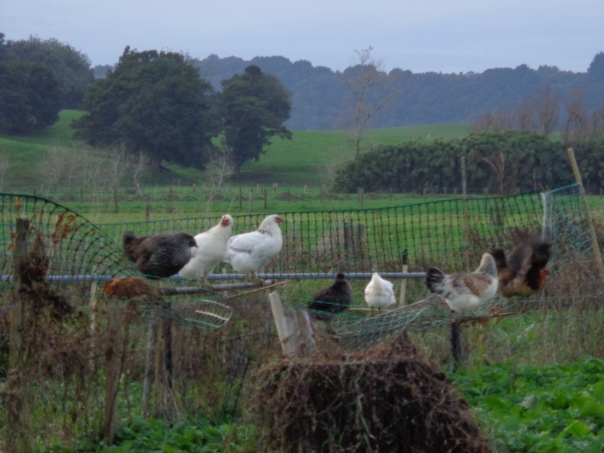 It’s just as well I protected my salad seedlings as the chickens seem to be making a mockery of my efforts to fence them in!

I decided to build a mouse proof cover for my seed trays out of things hanging about the place.  I could have gone to the local hardware store, but I decided to make the most of what I had, although in hindsight it would probably have been best to have made that trip. 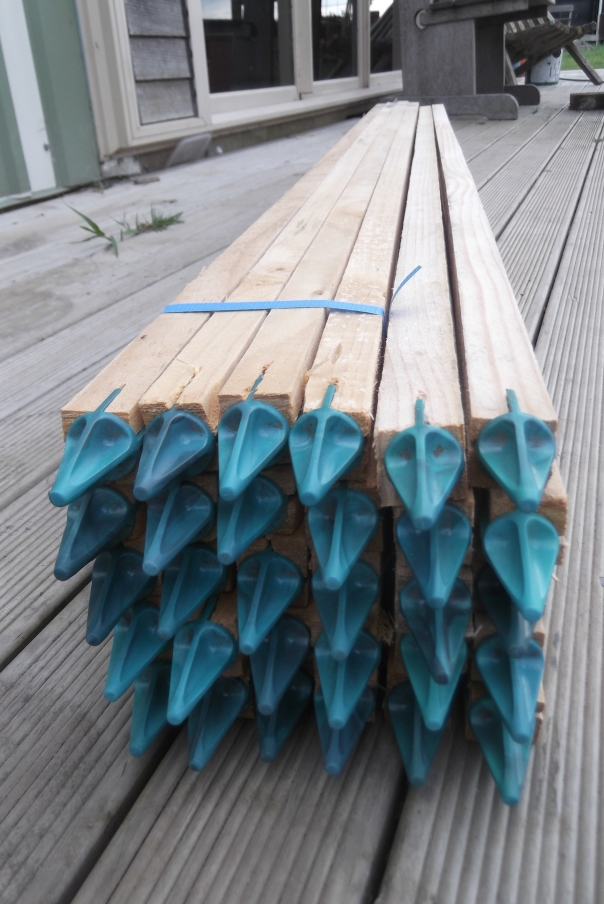 These stakes held so much promise, but it turned out it was the only thing they were capable of holding up!

I had all these lovely tomato stakes from the summer that turned out to be the worst stakes ever!  They rotted below the surface of the soil and ceased being supportive and caused me know end of trouble as retrospective staking never works well.  So I took great pleasure in hacking them to bits with a saw.  I had a rough plan in my head and made some rough measurements, but I’m not really one for great precision and well… you can image how straight and uniform all my lengths of wood weren’t.

Then it came time for assembly.  This is where I ran into great problems.  I had loads of nails, but they were either too short and didn’t come out the other side of my wood or too long and they would have poked out a considerable length of both bits of wood they had joined together.  I tried to be resourceful and thought that stapling would work well, but I hunted high and low for the staple gun but just couldn’t find it.

This is not a good idea.

A lovely friend called round to find me trying to attach two pieces of wood together by trying to hammer in the staples.  I wouldn’t recommend this for two reasons:  1. The staples are actually quite weak and will bend under the bang of a hammer and 2. You have to hold the staples between you thumb and finger and there isn’t a lot of surface area left for the hammer head.  I shall end up with purple fingers.  She just laughed at me and suggested using some of the short nails on an angle.  Which kinda worked, but the whole structure was really rickety.  So I reached of an old favourite and the world’s greatest fix it tool – Duct tape.  Wound tightly around all sides and it was much more rigid.  And it cleverly hid all my mangled staples and bent nails and is in a dashing shade of grey. 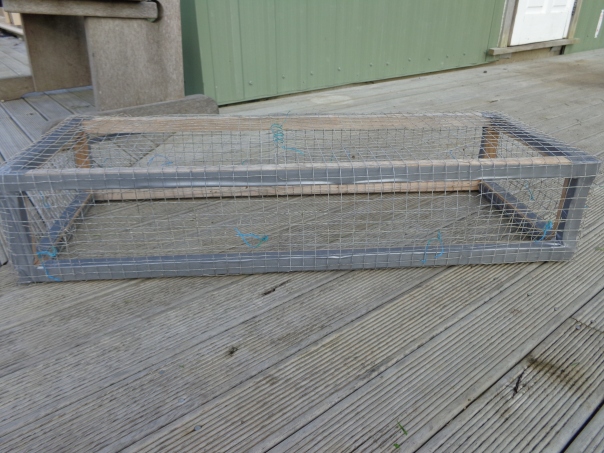 Not a bad effort all things considered!

The next stage was to wrap the structure in left over wire mesh that the chicken coop is made of.  After much discussion we decided it wasn’t a lot different from wrapping a gift, and I reached for the wire cutters and deftly trimmed the edges so it all fit snuggly and we folded them in.  It was at this point the staple gun would have come in handy to hold it all in place – but alas no…  Goodness knows where it is.  So my resourceful friend suggested twisty ties and before you know it we had cobbled together an “anti-mouse seed protector device” and I installed it in the greenhouse with all the hopes in the world that my seeds will be safe and peas with reign in my garden once more.

Come again soon – I don’t think I can put off doing some actually digging much longer.

← I think the winter is toying with us.
Apparently I need a snake →