Very soon – like in days – I’ll be sowing my first seeds of the season and I’m really excited.  However I have been meaning to test the viability of some of the seeds I sorted out recently, but the strawberries completely stole all my attention.  Then while doing an extraordinary amount of waiting for an appointment, I could only get my gardening fix from the magazines I brought with me.  Experience has taught me not to rely on the reading material provided by hospitals as they are often very old  – think  1976, and you have already read it from cover to cover last time you were there doing an inordinate amount of waiting.

Nicely laid out seeds – germinate little seeds – I need you!

In a couple of different places I read articles about how to test the viability of seeds.  Now if I didn’t take this as a huge sign that this is what I should be doing and prompt me into action then I’m not the brightest star in the sky.  Although I don’t need magazine articles to remind me to do what has been niggling in my mind for days and days that almost stretch into weeks.    I need to test my older seeds, so I can order more and get them sowed before the ideal window passes me by and I end up playing catch up all season.  Sometimes I’m my own worst enemy, especially when it comes to procrastination.

So I stole a moment in time, when I should have been doing other things more urgent in the eyes of others – things like vacuuming and washing dishes and sorting socks, and I set about testing my seeds. 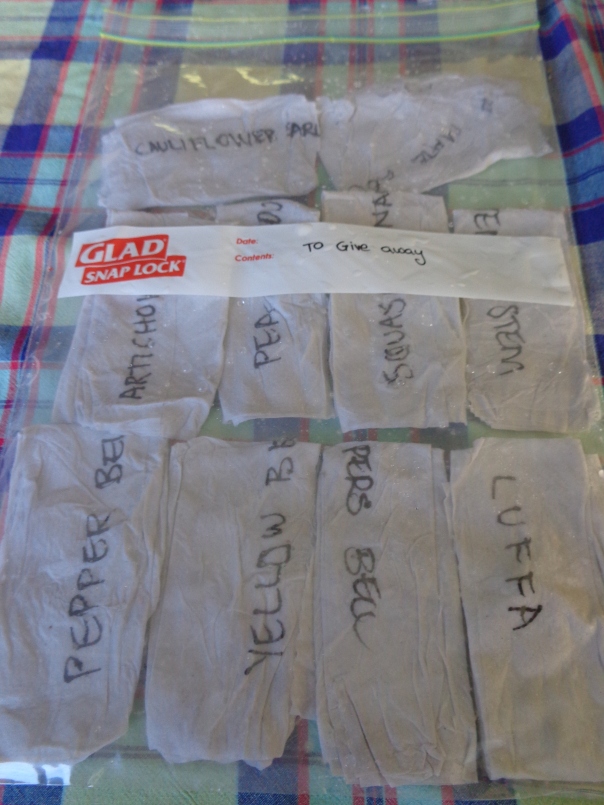 I got a whole roll of paper towels and ripped off double sheets and wrote the name of each seed I wanted to test on each pair of paper sheets.  Then I laid the lot – with their labels facing up – in a shallow dish, with some water in it and allowed the towels to soak up the water.  By learning the hard way, I found it was best to stack the sheets in the dish at a quarter turn to the previous one to help prevent them sticking together and turning into a torn, soggy mess.

Next I got the seeds I wanted to test and put ten seeds on to the top paper towel – nicely spaced and then folded it up in a way that made the label visible on the outside but the seeds were snuggly contained on the inside, like some kind of soggy origami.   I gently squeezed out the excess moisture and locked them all in a large zip lock style bag and put them in the top of the hot water cupboard.

Their new abode for the next five days while their actions determine their fate.

I’m going to give them five days to identify themselves as worthy to go in my garden.  I don’t have time to muck about on some fickle seed intent on mucking me about.  In the meantime I may just order more….  Just in case.

Come again soon – the sun is still shining, the hose is set on a timer and I can get on with actually building stuff!

← What kind of winter is this?
I’m dreadfully sorry but… →