Bananas and breadfruit…  I’ve been away.  The last couple of weeks I have been cruising around the South Pacific, with exotic destinations such as Noumea, Fiji, Vanuatu, New Caledonia, and starting and ending in Sydney, Australia.  It was such a whirl wind tour – nine wonderfully tropical locations in a 14 day cruise.  It was really lovely, and I was sharing the gardening love as I was blessed to be able to speak to audiences about the joys of gardening and why our fellow passengers should start a garden as soon as they got home.  I think I managed to convince some new gardeners, which is great news.

But at sea there is no gardening to be done – something to do with biosecurity.  All the plants on board the ship were plastic!  So every time we landed somewhere exciting my eyes immediately sort out anything green and growing, and in particular anything edible.   While tomatoes, cucumber, lettuce and all the ‘ordinary’ summer salad ingredients were readily found on our plates, they weren’t anywhere to be seen in any of the island gardens I saw. 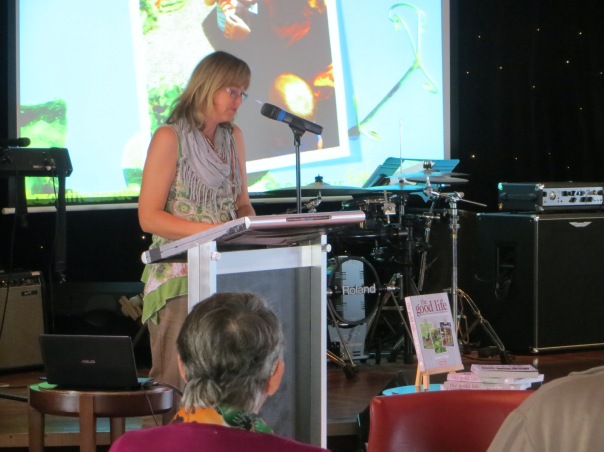 Me sharing the gardening love to anyone who would listen!

Most of the veggie gardens I saw were carved out of jungly wilderness and to the untrained eye or disinterested non gardener, they would be easily missed.  Sometimes things were grown in rows, but more often than not it was a higgledy piggledy chaotic style of plants growing in a patch that appeared to have luscious weeds encroaching upon them.  The plants themselves where quite unfamiliar to what would be found in the average kiwi garden.  Taro and cassava are a common favourite across the pacific and we got to try these ‘delights’ on several occasions, however they are somewhat of an acquired taste. 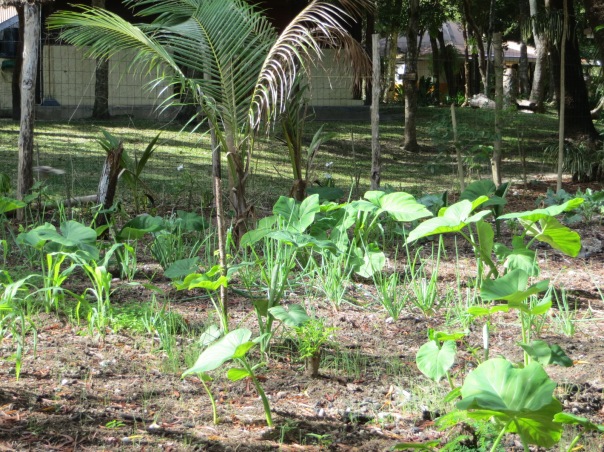 The bananas, papaya and pineapple were so fresh and so sweet and nothing like those that reach our temperate land.   The coconuts were pretty amazing too.  In the islands they are ‘the tree of life’ and provided almost all the essentials of life.  But for a tourist it is a quenching novelty drink – whacked open by a local with a machete and slurped up with a straw, and then the soft flesh scooped out and gobbled up.

Green coconut – a refreshing drink after a tropical swim

I got so excited in the Isle of Pines when we stumbled upon a petrol station where we discovered we were heading off in completely the wrong direction.  While Hubby the Un-Gardener used is best school boy French to work out where we were and how to get back to where we should be, I wandered about looking at the products on offer at this humble remote store and found a rack of veggie seeds, and it was all the usual stuff – tomatoes, cucumbers and peppers – except in french under the label “Tropica”.  I felt a twinge of longing for my garden and wondered how it was faring without me. 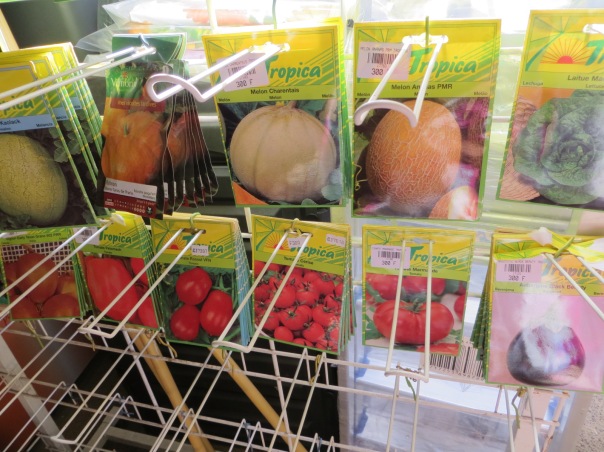 Tomato and melon seeds in the French Pacific.

On returning home, it appears to have not fared well.  Although winter officially starts tomorrow, it appears there was a pretty heavy frost a few days ago.  The kind of unseasonably early frost that makes news headlines.  Things in my garden have died. Some things should have long since been buried in the compost heap – like the zucchini.  However I was kinda hoping I could limp the peppers along for a bit longer and as frozen peppers go mushy, there was no saving the harvest that should have been waiting for me.   But this is the way of the seasons – and the immediately impending winter is an ideal time to have a clean up.

I think the zucchini are done for the season!

← I told you there was a lot of stuff in my garden….
Digging up dinner. →

23 Comments on “Coconuts and Cassava”