digging has been done

In the last 30 days we have had 26 days of rain and of those 14 had over 5mm.  To be completely honest with you I did round up two days from 4.8 to the nearest whole number.  One day even had a whopping 50mm. All in all we had 206.6mm of rain in the 30 days I decided to do my 30 beds in 30 days challenge.  And it wasn’t just the days it was raining that stopped me getting out there, but the days afterwards waiting for the earth to stop making that sucking noise as it pulled all the surface water back to its regular table. So all things considered – I did a grand job.  I have cleared 14 and a half beds.

It isn’t looking too bad

So I have decided to change the rules of my challenge and extend it by two weeks to make up for the torrential deluges.  And of course in the interests of fairness – if it rains again in those two weeks then I would be obliged to shift the end goal once more.  Well – you can’t work wet soil and I really don’t want to catch a cold.  Although at this rate I will still be clearing beds at Christmas time as the next 10 days all have rain in pictures on the weather boffins website in varying degrees of intensity – but mostly really quite extreme.  I am looking forward to the predicted 100km winds tomorrow – not!  I hope they got this one so very wrong!

not a bad bunch of carrots schlepped from the muddy ground

But it hasn’t all been staring longingly out the window.  There was rain today – a bit of a splat in the morning and despite being dark and gloomy, it soon dawned on me that that was it – there wasn’t any more rain.  So I seized the moment, grabbed a beany and a warm jacket and tried to have a productive day.

I love these in looks and taste – yummo

The first thing I did was mow the grass as a fresh cut makes it seem like a fresh start or in this case a restart.  I started mowing three days ago and I broke the mower.  The pull cord broke and it sucked back into its inner being without a trace.  Conveniently a handy friend came over.  This was a job too far for Hubby the Un-Gardener.  There were pop rivets holding the doofery on that had sucked in the string.  I was all for going out and buying a new one.  I had one eye on the sky and I really wanted to finish the job.  But our handy friend fixed it all like new – well not quite new as the poor wee thing has been brutalised and terrorised in the few short years we have had it.  Its wheels have been welded back on – TWICE, it has dents and dings on the body.  The screws that hold the handle from folding over on itself have long since disappeared and with the promise of buying new ones I wound the broken limbs with waterproof duct tape on a hot sunny day way too many months ago.  The cover that hid all the mechanicky bits seems to have disappeared since its latest repair.  We had one job… but it still works and so I figure it was just cosmetic anyway. 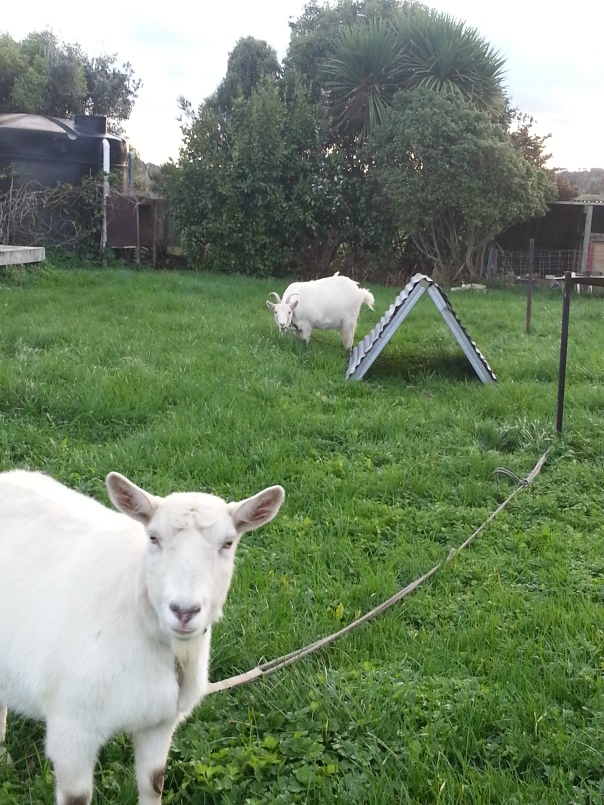 So with a restored mower and an absence of rain I returned to the garden only to find I couldn’t tell where I had been three days earlier.  Seriously the grass has grown so much.  It should have been an obvious delineation between mowed and unmowed, but I couldn’t see it.  So I started all over again! 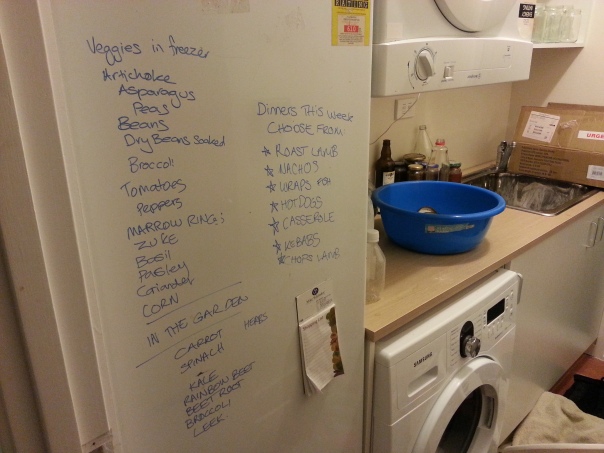 The freezer in my new laundry has found an extra function

Spurred on by the burst of invigoration that mowing brings I prepared a bed to plant out my shallots and elephant garlic, I tightened some ties on a willow branch we had lobbed into the ground and are expecting to turn into a magnificent tree.  And it was probably just as well considering tomorrows impending power breeze.  I harvested some coriander before it disappeared into all that feathery foliage that is all fluff and no substance and next to impossible to harvest a descent amount to add zing to a meal.  So I chopped it all up finely and flat packed it into a plastic bag and bunged it in the freezer.  I should sow more.   It seems like I did more than that and my body aches from the effort, but that was it.

I think I may move the raspberries – how hard can it be?

Oh but I did write a list of all that needs doing – it isn’t that long under the circumstances – with it being winter and all.  But if I leave winter chores to sneak into spring it will unleash all kinds of chaos, so I must carry on in the bits of day between the rain, wind and strange weather symbols that I don’t know what they are (I never did find out what that last one was as nothing strange happened.)

Come again soon – progress of sorts is being made.

← And today is going to be…..
One becomes two and two becomes one – a tale of two berries →