I have to be the luckiest gardener in the world!

I woke up this morning to my wonderful family bearing gifts.  This isn’t something they do often – just once a year.  I got loads of cool stuff but they saved the best to last.  A shiny new Gardena 6 hose Automatic Water Distributor and a Timer too.  How could they have known it was my heart’s desire?

How cool is this!

It could have been how I blogged about wanting it ever since I first saw it, the not so subtle hints I left on facebook, or that the catalogue was left “lying about the place” in strategic locations, or even the sigh as I passed by the catalogue conveniently open on page 11.   But I’m not sure…

The thing is not only have the family given me a gift, but they too will receive the gift of my time.  Once I figure out how to use it to get the best out of my plot, I will be liberated from the constant demands of my thirsty garden for months and months.  I shall be able to set it to its daily task and think of it no more.  Although I may end up going back to it from time to time, just to look and watch my green babies being watered – like how you do when you get a new front loading washing machine and can’t help but watch a few cycles go round in the wee window at the front!

I now have to face my fears – the broad beans are starting to pod up. Apparently they are nicer small so I can’t put off my attempt to be won over by them this year!

There will be no more being ruled by the timer on my phone, constantly going off every fifteen minutes to turn off the tap, move the hose, turn on the tap and reset the timer on my phone.  Every so often I would have to change the ringtone because I would become so familiar with it I wouldn’t hear it, much to the annoyance of those around me.  I have such a large garden that in the height of summer this quickly moves from the pleasure of feeding my green babies, to a chore and towards the end of the season a burden.  Well not anymore!  Hurray!

But there isn’t much need for it just yet as my plants aren’t in the ground yet and are in the process of being hardened off.  But this hardening off process is such a palaver.  Last year I was fighting against a windy spring and my wee seedlings kept being blown over and the soil in the pots were constantly drying out.   This spring has not been so windy and I was just thinking that to myself as I was in the greenhouse potting up more seedlings – goodness knows where they will all go, I’m running out of space in there. 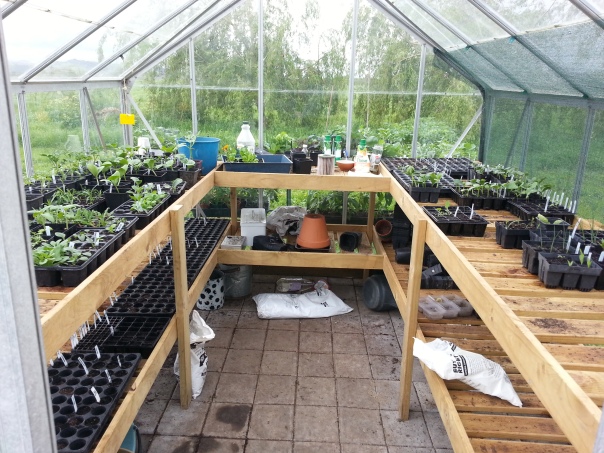 There is not a lot of room in here for everyone to have their space. It is getting quite cosy! Not long now before the big ones fledge the nest

But the sky suddenly turned black and big fat rain drops came crashing down on the roof of the greenhouse and in through the open window.  I started to reach up to close the window when very loud and very close thunder and lightning rumbled and flashed so I thought I’d better not.  The temperature had dropped and so my teeshirt was no longer warm enough, and my abandoned jumper was out there in the rain somewhere, probably beside the brassica bed I had been digging.  So there I was cold and wet and not really very happy.  The rain was too heavy to make the dash back to the house. 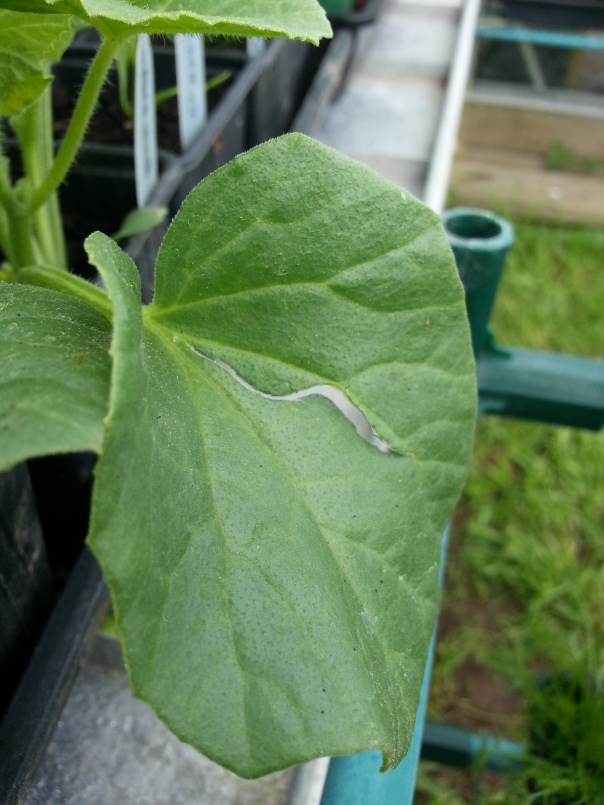 Oh my poor green baby melon. Just look what that nasty hail did! Can you get horticultural bandaids for this boo boo?

But then it started to hail and a gardeners crazy instinct took over and I raced across to the shed and grabbed a dirty old compost bag that I had opened by a slit across the top and one down the side as I find it easier to empty out onto the garden that way, and popped it on my head like a hood and ran around to my seedlings which were being hammered by the hail 7mm across.  They were still so tender – they could get hurt and I was not having that!  I didn’t spend all that time raising them for hail to harm my perfectly healthy young plants.  It took several trips in the rain to save them all.  But for some the damage had been done, although my efforts had minimised this a little.  And then as quickly as it came, it was gone and the sun came out again like nothing had happened, the only evidence was a few shredded seedlings and me – soaked to the skin! 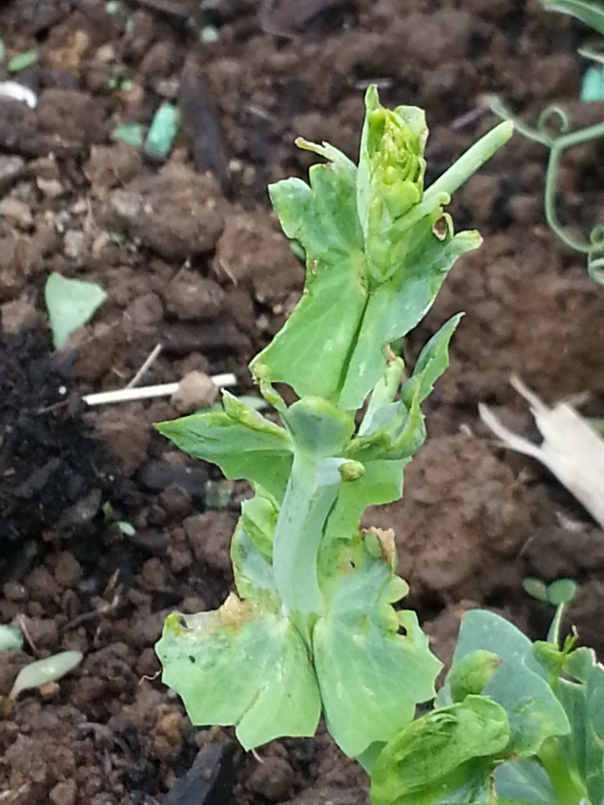 And if its not one thing it’s another – the birds are eating my peas! I need a net. Grr

Come again soon – I have instruction books to read and irrigation systems to plan.  This is the best birthday ever!

← Sharpening my tools
The big day is upon us…. →

22 Comments on “I have to be the luckiest gardener in the world!”