How to make Yellow Tomato Paste

In my absence summer picked up and left and autumn stepped in to take its place.  At this point there is no noticeable difference, as it is still hot, hot, hot.  The garden is still doing its thing and the wonderful Hubby the Un-Gardener did a grand job of keeping everything alive.  He may even have been more diligent than me with the watering – but don’t tell him.  I think he was mostly driven by fear. 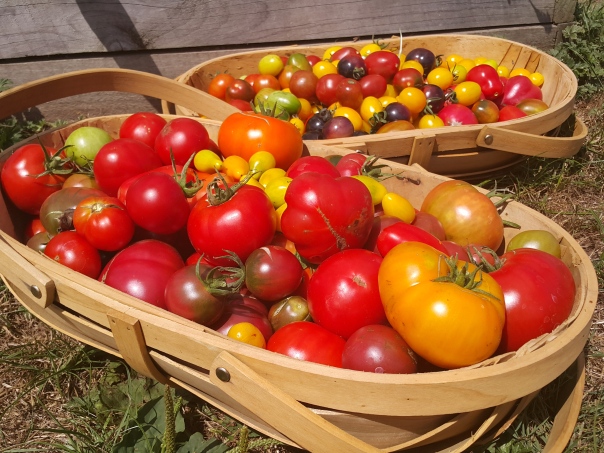 He did do some harvesting and the kids ate well in my 10 day absence, but there is the harvesting of the hungry “hmm… what shall we have for dinner, I’ll take these 4 tomatoes, a pepper and a zucchini” not completely understanding that you need to pick everything that is ripe or the plant will think it has won this great battle between its need to produce seed and the gardeners desire for a regular feed across the season.

Tomatoes all ready to be sun dried in the greenhouse

So despite suffering from jet lag and still wondering where my bags are, not that I’ll need my winter clothes for some time yet, I got straight out into the garden to see what I could do.  The tomatoes grabbed my attention first.  A lot of the leaves were yellowing and after a moment of fear “could it be blight” I was relieved to find it was just old age.  So I whipped all the manky leaves off, gave them a feed and harvested so many tomatoes of all shapes, sizes and colours.

A small batch of pasta sauce in the making

We normally eat our fill of fresh tomatoes and the kids eat them like candy, then they appear in almost every sandwich, salad and meal. What is left is then preserved the easy way.  Frozen.  Lobbed into a bag unwashed and with stalk attached and frozen.  The bugs are dealt to by the cold, and to use in winter – running under the tap for a few seconds allows the skin to slip off and then the frozen flesh  is melted into a soup or a casserole.  I’m all for making things easy. 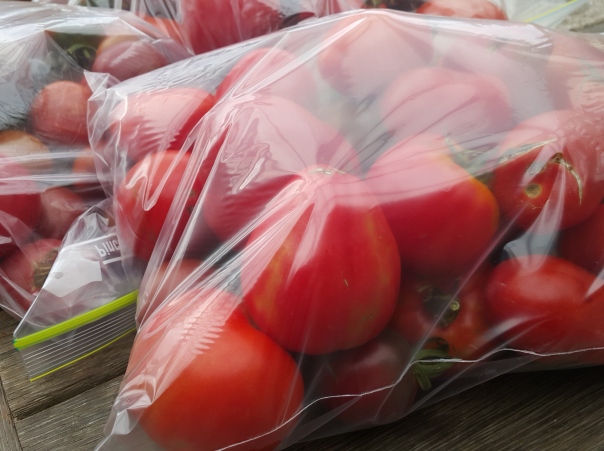 Tomatoes ready for the the freezer

But I like to have a bit of fun with my tomatoes too and I have found you can sundry them in your car.  >see here<.  So when I saw an abundance of yellow tomatoes in my basket I knew in an instant what needed to be done:

The yellow tomatoes appear to be prolific this season – something must be done.

So here is what I did.  You can do the same with normal red tomatoes, and the yellow tastes just the same, only it isn’t red. 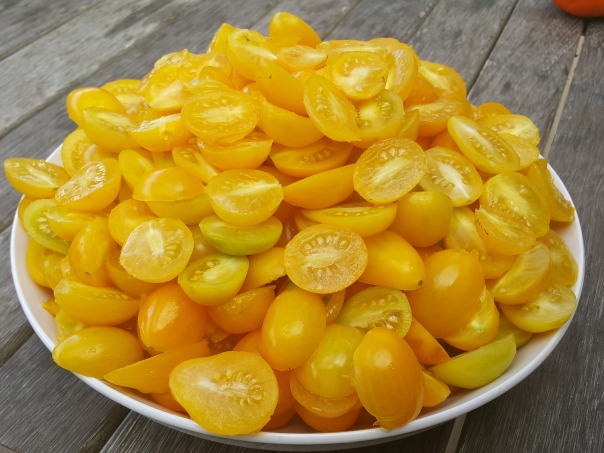 The first thing I did was wash the tomatoes to get rid of the detritus of the garden.  Then I sliced them all in half.  It would have been a quicker job if it wasn’t the cherry types.

Next they went into a big pot and were simmered until soft and mushy.

Although not technically correct, whizzing them up made the straining much easier and faster

This next stage can require varying degrees of effort depending on how fussy you are.  I’m a bit lazy and although I don’t like the skin in my paste, I don’t mind the seeds.  So technically you should pass it through a sieve to remove the seeds and skin.  But I started to do that and it took forever.  So I swapped the sieve for a colander and the skins were gone in a jiffy. 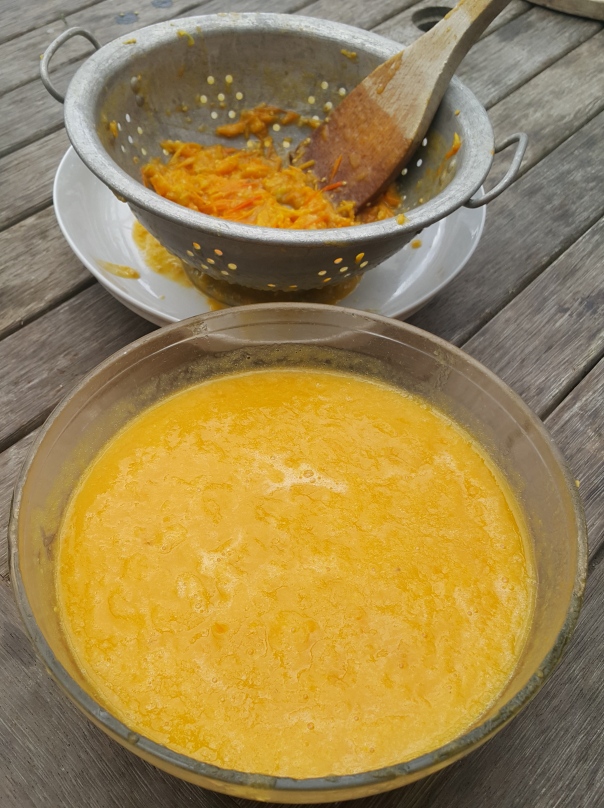 Then I returned the tomatoes to the large pot and turned it down to a simmer and begun to reduce the liquid.  Initially you just need to stir occasionally, but then this soon becomes frequently and finally we find ourselves stirring constantly to stop it sticking to the bottom and burning. 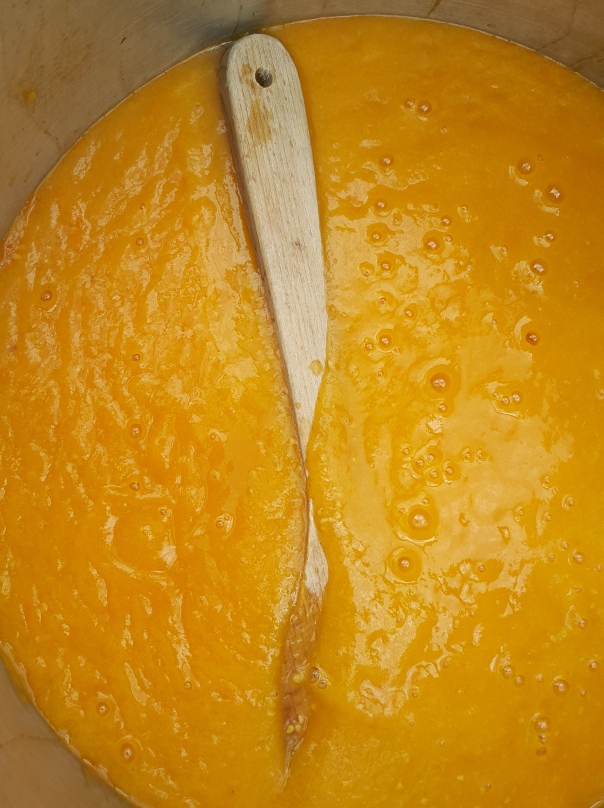 This is not an ideal situation – I don’t recommend it

But please be very careful.  It goes through this stage where it seems to resist your efforts to turn it into something else and spits at you.  It is hot and nasty and will burn you.  Your kitchen becomes proof of this battle as there will be tomato splatters across every surface, like some horrific crime scene.  Push through though, because you will win and it is so worth it.

Once the tomatoes have been stirred into submission, they will thicken up to a paste like consistency – well like tomato paste.  If you scoop it up in a big spoon and turn it on its side the paste will be reluctant to fall back into the pot, like it is afraid of the terrors that are found there. 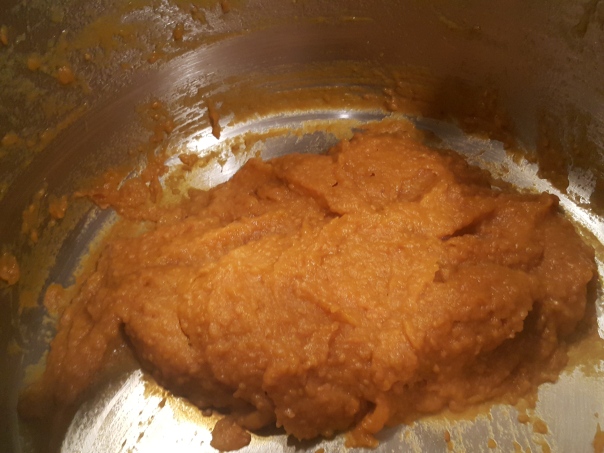 Then pop them into sterile jars.  At this point I will enter a bit of a disclaimer as preserving tomatoes can be fraught with danger as they are low acid.  So if you intend to keep this for a long period then please consult experts in these matters.  The keeping qualities of paste are improved due to the reduced water content, but I personally can’t guarantee the safety long term.  Mine will live in the fridge and will probably be gone within a month because we like tomato paste and use it a lot.

Have said that, in days before food safety advice the Italians used to spread their tomatoes out on a wooden board out in the Mediterranean sun for days.  Out in the open!  And when it was done they would scoop it into jars and seal it with olive oil.

Now we can make the coolest things with yellow tomato paste. How cool is this?

Oh and if I didn’t mention it earlier, this does take ages so it’s best not to start it after dinner, especially if you are jet lagged.

Come again soon – there is so much end of season stuff to do in the garden I’m not sure how I’ll find the time.

14 Comments on “How to make Yellow Tomato Paste”