Smack bang in the middle.

According to the calendar we are in the middle of summer.   I have mixed emotions about this as if half of summer has just gone, then we have been ripped off big time because the weather has been completely rubbish.  Although historically the first half has always been rubbish, with the second half of summer coming in with its sweltering heat and blue sky days that gives us the memories of never ending summer days and balmy nights spent out under the stars just hanging out.   At least we still have this to look forward to in the weeks to come. 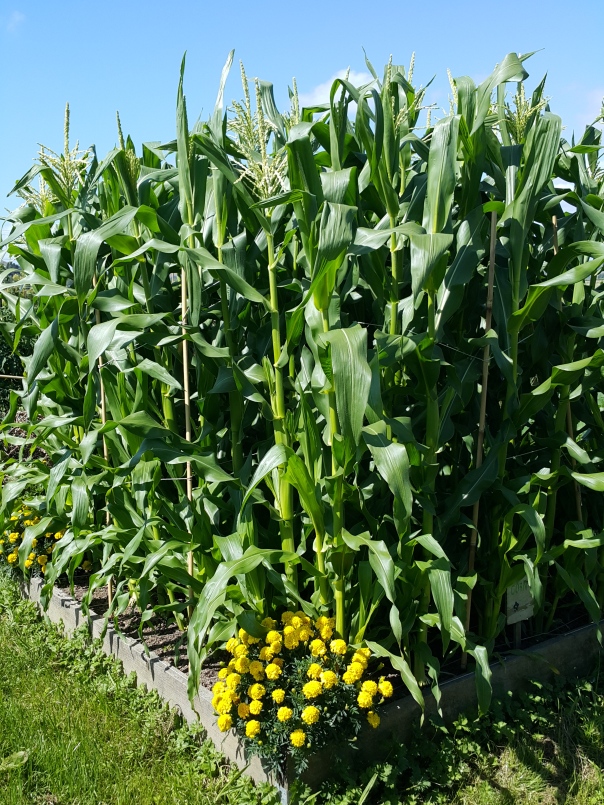 This will have the bulk of my corn harvest and I can hardly wait.

This is also a time when the harvest starts to really kick in.  I am longing for the fresh taste of sweetcorn picked moments ago.  I’m a bit behind where I normally am at this time of year because I fell behind in spring.  However, the corn is now taller than me, the risk of storms during the crucial time when the pollen falls from the tassels to the silks has mostly past, so I must continue to wait.  Sometimes waiting that little bit longer in spring is actually advantageous.  You just have to be ok with delayed gratification and exercise patience. 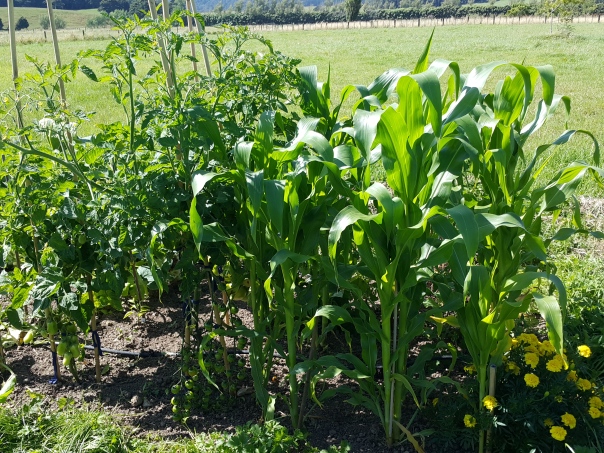 My learner garden shows you can have it all in a small space.

I have more corn in my garden than I normally do.  There is my usual stand of corn that we normally eat our fill from and then freeze the remainder to bring sunshine to cold, miserable winter days.  Then there is the small block of corn in the garden I use to grow alongside those who I teach how to grow veggies.  These cobs are the ones I normally slice off the juicy kernels and freeze in flat pack, zip lock sandwich bags to be used for making corn fritters which are so good for a quick lunch for hungry kids – oh and ravenous gardeners.

The popcorn is standing its ground against the tomatillos lolling about the place in the odds and sods bed. I never realised how prolific tomatillos were.

And then there is the popcorn.  It is so much sweeter than the bought stuff.  But this could be a biased opinion because I grew it and anything I grow tastes better than bought stuff.  This lives in the odds and sods bed away from the rest of the corn so it doesn’t cross pollinate because popcorn corn is different from sweetcorn corn and I really don’t want either of them to become something I wasn’t expecting.  Popcorn kernels have a much harder shell, which allows steam to build up in there when it is heated until it can’t take it anymore and pops and its starchy goodness gets turned inside out.  You want your popcorn to be starchy with a hard shell.  On the other hand you want your sweetcorn to be sweet and soft so you can gobble it up, right on the cob.  Although it pays eat it or process it as soon as you can as half the sugars get converted to starch within a day of harvesting.  This is another of those secret delights only a gardener can experience – minutes old sweetcorn….  Hmmm so good.

I am intrigued by this crop of painted mountain corn growing amongst the pumpkins.

This is what I normally do.  I’m such a creature of habit.  But this year I have kicked off my set in my ways habits and have the painted mountain corn.  Which I chose because it looked so pretty, which is a perfectly suitable reason to have something in the garden.  According to the catalogue it is ‘excellent for decorative purposes, easy roasting on the barbecue, grinding into grits or making a fine flour.’  So I’m spoilt for choice with this one.  Once it forms ears.  So as not of cross with the popcorn or sweetcorn I’ve put it in with the pumpkins in a two sister kind of way and the pumpkins are way across on the other side of the garden from the sweet corn.

Finally I broke all my own rules and allowed unwanted interlopers to remain in my garden.  When I sowed my sweet corn I dropped two seeds in each hole.  Once they popped up I took the weaker of the two and filled in any gaps where nothing popped up at all.  I couldn’t bear to discard the left overs, so I offered them to a friend who promised to take them so I temporarily put them in a gap in my leafy green bed for the time being.  But days drifted into weeks and we remembered to mention it to each other yet failed to act upon it.  Then Christmas came and went and the window of opportunity for moving them was well and truly lost and they are still there amongst my leafy greens, with no regard for proper spacing rules.  They seem to be perfectly fine.  Just to add to the chaos in what should be my orderly leafy green bed, a random pumpkin? has sprung up and has ingratiated itself among the overstaying corn.  In the true vain of a volunteer plant it is doing really well and I don’t have the heart to move it.  Despite having a firm rule of ‘a weed is any plant in the wrong place’, I tend to give in at least once in a season.

Not long now before silks appear, pollen drops and this wee cob gets fat and juice and then I can eat it!

Now I am longing not only for the sunny stable weather the second half of summer brings, but also a delish cob of corn, straight from the plant, steamed in its husk on the BBQ and slavered in butter.  Not long now!

Come again soon – the tomatoes are starting to come ripe to and I have so many potential new favs to try.

← Oh well, there always next year.
Sometimes decisions are made for you. →

19 Comments on “Smack bang in the middle.”