Size doesn’t matter – it is all edible to me

Posted on February 3, 2016 by Sarah the Gardener

I’ve had mixed results with my onions this year.  My Hunter River White onions were ginormous!  They were my best ever in all the seasons I’ve been growing onions and I could put behind me the dreadful season where the entire crop ended up in two pickle jars.  This year I’d be hard pushed to fit one onion into a jar.  With this success bolstering my confidence I held out high hopes for my shallots.  I’ve finally mastered growing onions.  Or had I? 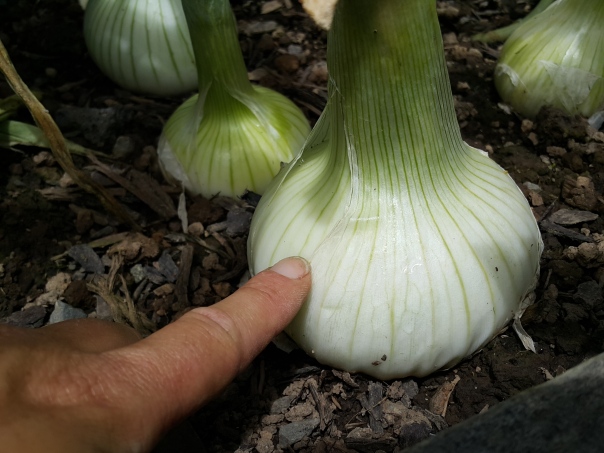 My onion just get bigger and bigger – I’m so proud.

I watched all season as my shallots burst forth with little green shoots in the late winter and became an ocean of green in their corner of the garden.  I fed and watered them regularly, weeded them tenderly and with great anticipation dreamed of jars and jars of fabulous pickled onions that would be the envy of all store bought varieties. 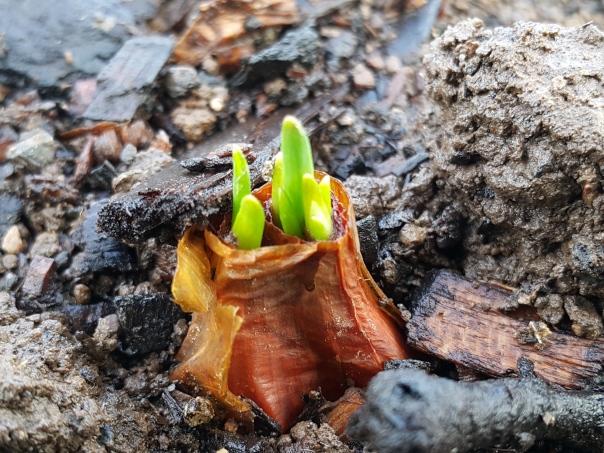 In spite of the cold, new life emerges in mid winter as shallots make there presence known

However, as the shortest day came and went and the green tops began to bend over, I peered into the patch with dismay.  Surely that couldn’t be my shallot harvest.  They were quite small.  I decided to leave them there a little longer – in the desperate hope they would increase even by the slightest bit.  Unfortunately, all they did was shrink as the outer layers dried to protect the tender layers below.  They were now beyond hope.  My shallots had failed.  But had they?

Seriously – this couldn’t possibly be the best shallots I can grow. I must try harder next season

They may have been small, but they were still edible, and there were a lot of them.  Did I really just want to throw them out?  Being a person who really doesn’t like waste – especially if it is the waste of something I’ve taken the trouble to grow, I decided to push on and pickle the crop.

Peeling shallots can be a bit of a nightmare

The hardest part was peeling all the fiddly tiny onions. I had horrendous memories of a previous experience when I pickled garlic and it meant removing all the papery layers and my poor fingers suffered dreadfully with the garlic version of paper cuts – particularly under the nails.  Not something I wanted to repeat anytime soon.  I had heard soaking them in water would make it easier so I transferred the lot into a large bowl of water and worked slowly slipping the damp skins off.  It was much easier but it seemed to take forever.  I killed the time by watching my favourite You Tube garden videos.

Soaking shallots is a great solution

Once they were all peeled and I had a bowl of small white onions in a clean non-metallic bowl, I added half a cup of salt for each kilo and a half.  Having said that I only had 800 grams of onions so I adjusted the amount.  To complete this stage, I added enough water to cover all of the onions and stirred the mix until the salt was dissolved.  To stop undesirables falling in to the bowl, I covered it and left it overnight.

The next day I prepared some jars by washing them well in hot soapy water and then thoroughly rinsed them and popped them in the oven on 100°C for about half an hour to sterilise them.

Shallots free from their peels

Towards the end of baking the jars, I chopped up some chillies – not too many as I didn’t want to overwhelm the onions, and put them in a pot.  Then I added about half a dozen pepper corns.  I’m not sure how many exactly because I didn’t count them.  Then I added enough vinegar to the pot that would cover the onions and fill the jars.  I also added a tablespoon of sugar, just to cut through the sharpness of the vinegar as it can be a little harsh sometimes. 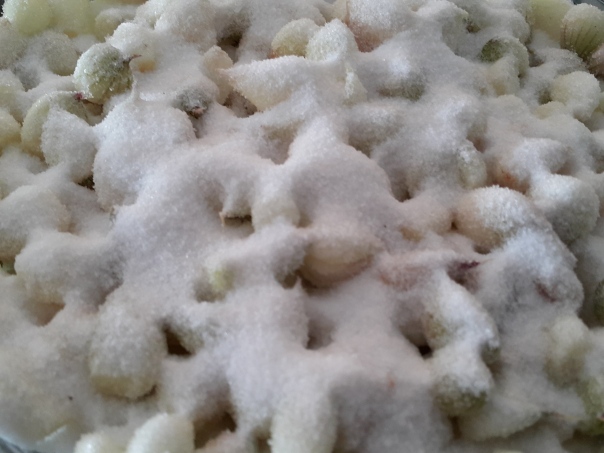 This spicy mix was then put on the stove and boiled for five minutes. I used apple cider vinegar and took a guess at the amount.  This time I struck it lucky and got it right the first time.  If you find you don’t have enough, you can make up a new, smaller batch of vinegar, chilli, pepper and sugar and boil it up and use this to top up the jars.  If you have too much then you can mix the left over liquid with olive oil and you have a fabulous salad dressing.

This should give the pickled onions a great flavour burst

You could work out how much you need before you sterilise the jars by packing the jars with the onions and filling the jars with water, then tipping it all out and measuring the amount of water it needed.  Then add some more to the volume to allow for evaporation during the boiling stage.

While the vinegar mix is being boiled, I carefully removed the hot jars from the oven and packed them out with onions and tried not to burn myself.  Next I poured the boiling mix over the onions. Wiping the rims of the jars with a clean paper towel is a good idea to ensure a good seal with a with a lid that has been boiled in water for 5 minutes.   As the jar cools down the lids make a satisfying pop to say a good seal has been made. 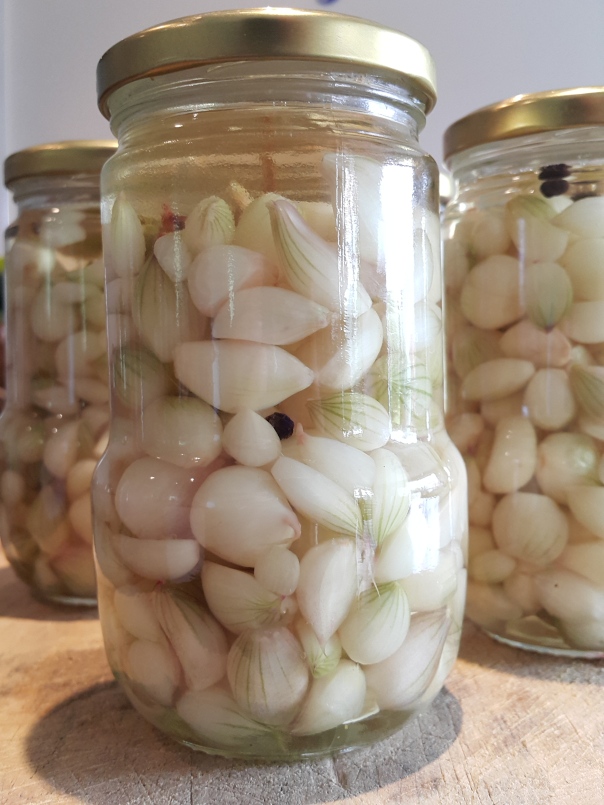 And now we wait

It will be about a month before I can eat them, and I’m quite forgetful so I’ve labelled it with the date with a permanent marker on the side of the jar.

Next season my shallots better be bigger because as much as I love a good pickled onion I don’t fancy going to the effort of peeling them all again like that in a hurry.

Come again soon – I’m creating a nursery for some babies.

← Thinking about cooler days.
I’ve made a nursery garden →