Today was one of those amazing blue sky days that winter graces us with from time to time.  There was not a cloud to be seen and not even a puff of wind.  Out of the shadow a warmth from the sun was discernible.  It was magic.  It was a day for gardening and gardening I did.

BEFORE: Spent asparagus fronds do tend to look a little scruffy. Time to pull them down.

I started with the asparagus as the fronds were yellow and fading to brown, which is a sure sign the crown has sucked all the goodness out of it and stored it up for the new season.   As I cut down the first frond I had an idea that my poor fingers now regret, but it was so worth it. Instead of hauling it off to the compost heap, I decided to use is as a mulch back on the bed so the plant could continue to reclaim some of the goodies it had pulled from the soil back in the spring and summer.

After a check to make sure there were no pests or disease, I grabbed my handy secateurs and proceeded to chop all of the fronds into short lengths and popped them into my trolley for the time being.   It didn’t look like much but after over and hour of snipping and chopping the fronds from the first asparagus bed I filled a filled my trolley to overflowing.  Then I weeded the bed, enriched the soil with a thick layer of compost, some blood and bone and some sheep pellets.   The fronds were returned to the bed in a satisfying mulch layer.

AFTER: All clean and tidy and all we have to do now is wait for the delish asparagus spears to show up in a few months. I can hardly wait.

The process was repeated with the second asparagus bed and by the end of the morning the garden was once again transformed.  An area of height was reduced and the outlook is completely different.  The other thing that resulted from a morning of an extend period of snipping and chopping was three rather large blisters on my hands, but it was worth it. 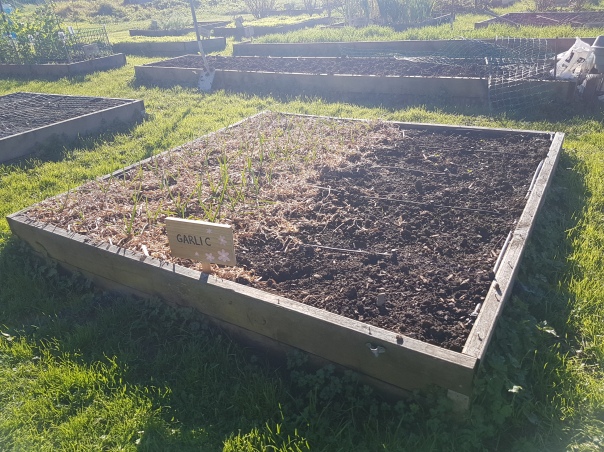 BEFORE: The early garlic is coming along nicely, and the other half of the bed is waiting for its crop to be planted

The next task at hand was a bit of a doddle.  It was a couple of weeks early if you go by the old wives tale but the packet assured me now was a good time to plant my garlic.  The early garlic is racing ahead and looks promising.  Hopefully it will get big enough before the rust strikes, although it would be nice to avoid that this year.

AFTER: 30 small cloves have been tucked into the soil and a blanket of pea straw pulled over them to keep them safe as they grow

I couldn’t remember if I’d enriched the entire bed when I planted the first lot of garlic or just the half I planted out, so I chucked in a few extra bits and bobs just to be sure.  I planted 30 Presto and 30 Takahue cloves so now we have 120 possible garlic bulbs to harvest in the summer and last us all year.  This is the plan and I intend to stick to it – the environmental conditions will just have to conform to the plan too.    To reduce the risk of fungal spore splash back from the soil I put a lovely layer of pea straw mulch over the bed.  The new shoots should have no trouble growing up through when they decide to emerge.  All of the bending over did however, make my poor old back a bit stiff. 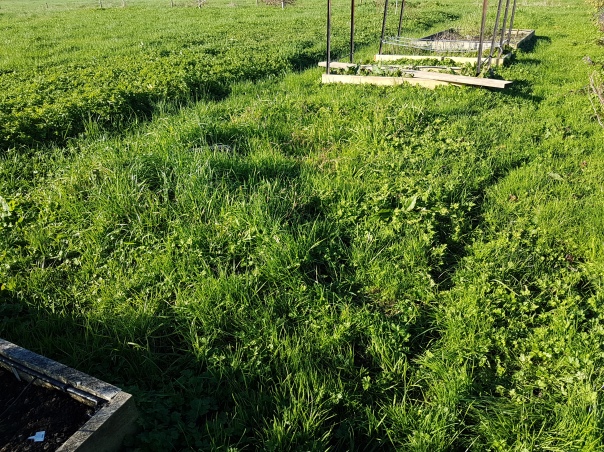 BEFORE: To the untrained eye there looks like there is no coming back from this nightmare. It would be easier to run the mower over it can call it lawn. But I need the space.

Finally with the afternoon beginning to wane, I tackled one last bed – my in ground mixed bed.  It was an overgrown weedy mess.  The soil was still damp-ish and to work my way across it would have been nothing short of a nightmare and would take forever.  So I took the easy way out.  I grabbed some of the big boxes from the replacement fridge and freezer for the ones that died in the flooding.  I was almost more excited to have such great quantities of cardboard than I was the shiny new appliances.  I’m sure the delivery guys thought I was a tad weird when I did a happy dance when they said I could keep it.

I didn’t even chop the weeds back or pull any of the nasty ones out.  I just laid the cardboard over the top, weighted it all down and all I have to do now is wait.  I’ve got plenty of time before I need the bed in the spring, so if there are stubborn weeds I can repeat the process.  It should take about six weeks to clear the bed and the worms love the cardboard.  The rotting weeds will add organic material and the bed will be amazing.

AFTER: And in no time at all the problem has been taken care of with very little effort. I like this sheet mulching method if you’ve got the time.

As I stood back to admire my handiwork, I noticed the sinking sun was leaving a chill in its wake and the damp knees in my pants made my kneecaps stiff with the cold, so I packed up my tools and hobbled away from the garden feeling rather pleased with myself.  With a bit of luck the gorgeous day will repeat itself tomorrow and I can do it all over again.  Maybe with some less strenuous tasks.

Come again soon – this winter is turning out to be the nicest season so far.

6 Comments on “Before and After”