Asparagus is my Rainbow

Posted on October 9, 2017 by Sarah the Gardener

I don’t know why I was surprised when we returned from a day out to find the garden flooded again.  I wracked my brain to try and remember was the ground sticky when we’d left, or did the inundation happen in the 7 hours we were gone.  It had been a horrible night previously.  The wind howled like some demented banshee and kept me awake with worry.

But as I cautiously peeled back the curtain, my bunting was still in place, where I’d imagined it torn to shreds.  Even the cloches over the peas were still in place.  After the storm last week there had been minor damage to the bunting, which I repaired and my cloches were no longer protecting my peas but other crops and some weeds in other beds in the garden. 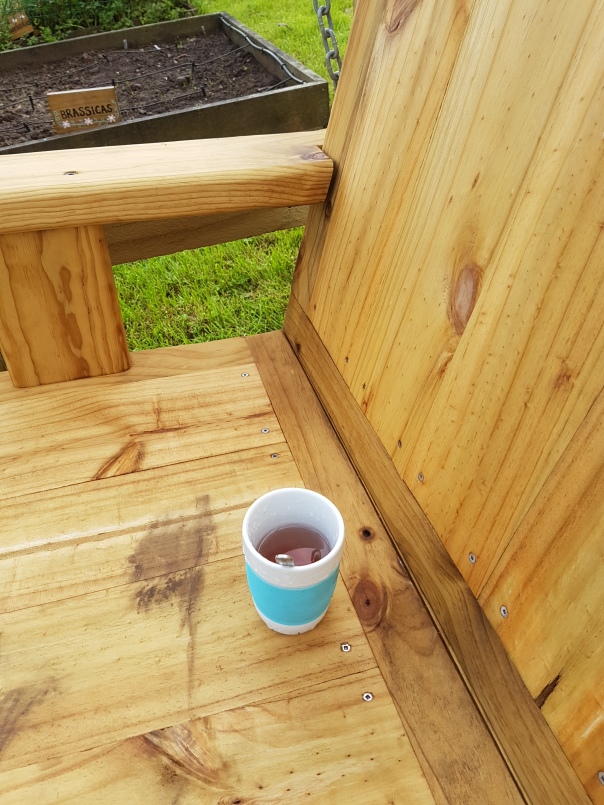 I thought I’d drunk that?! I left an empty cup on the swing seat the other day.  I’d given up checking the rain gauge lately but the boffins suggest our area had 9.6mm yesterday.

And more importantly the greenhouse was not in a broken tangled mess of glass shards, twisted aluminium and crushed tender foliage as my imagination had envisioned.  In the light of day, the greenhouse had stood strong through yet another storm.   So, as we left for the day I had a relief in my heart that the boffins were wrong again about the rain and I’d been spared the worst. 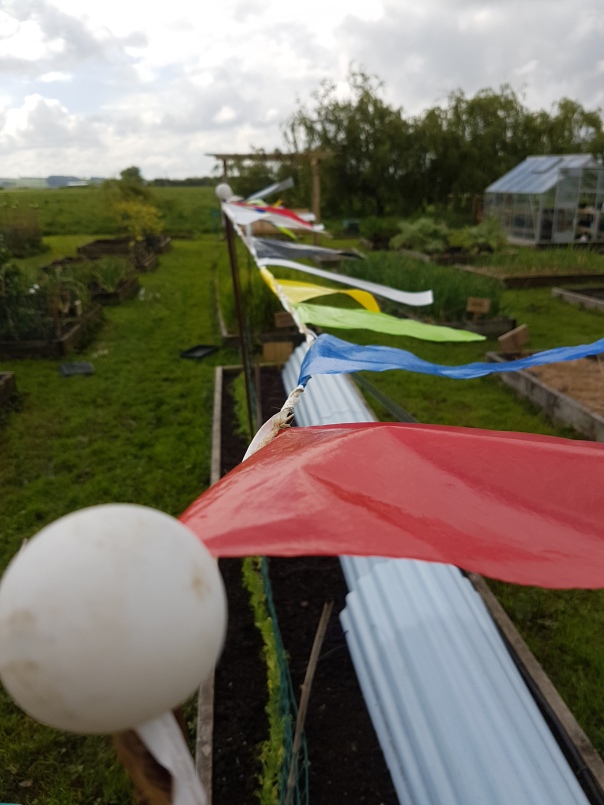 Even on a grey day the bunting lifts the mood and is doing a great job of deterring the birds.

The ground had only just become safely workable in most areas – all except the back row.  I’d planted spuds, weeded almost everywhere and even turned my attentions to the much overdue strawberries.  I had a skip in my step as I walked away from a day in the garden the day before.  Ok the skip was imaginary, it was more of a weary, bedraggled crawl but felt as satisfying as a skip would have.  There was good progress being made and despite the boffins warnings for the next day it couldn’t possibly be that bad…  we are almost closer to summer than winter …  almost, but it would appear not close enough. 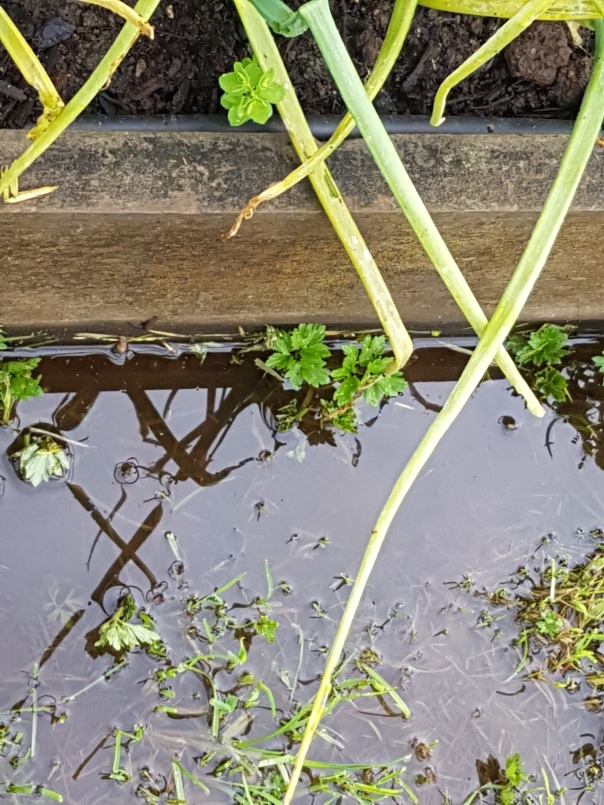 Looking for bright sides – the shallots make a lovely reflection

So now I’m back to waiting for the garden to dry out.  I’m not as frustrated as I was before as in the last dry spell I had achieved so much.  But it is still frustrating as I’d really like to get on.  It is supposed to rain a bit more for the next few days but that is supposed to be just showers so they don’t really count.  The boffins are suggesting for today:  “A few showers, more frequent with possible thunderstorms and hail this afternoon and evening.” So, I won’t garden today.

I have a sparkly, blingy garden! What more could a girl want!

This isn’t a moan – it is more a statement of fact. Because I saw something in the soggy soil and puddles in the garden this morning as I surveyed the scene.  Something that caused me heart to be delighted.  A hope and a promise for better times.  I’m taking this as my biblical rainbow – I’m believing there will be no more excessive rain.

… Actually a girl could want strawberries – lots of delish strawberries! I can hardly wait.

You see – I’d been worried – very worried.  I was almost too afraid to admit it.  It pretty much hasn’t stopped raining since March.  As at the end of September we had had 99% of the normal expected rain for the year – with three months still to go.  September alone had 130% compared to normal!  And not to forget the worst flooding we have seen here in 10 years of living here back in April.   So, it is fair to say the garden has had a lot to contend with – especially my poor perennials.

It still bemuses me that in spite of all the rain, the flower seed trays I sowed the other day need watering… water, water, everywhere but not a drop to drink!

We have lost a few trees – as the trees burst into life with fresh green colours, there are those that remain dark and bare.  The rhubarb has struggled, not gone, just failing to thrive.  The artichokes have come back but the leaves err on the side of yellow as they struggle with each new rainfall.  But the thing I was most worried about was my asparagus.  To begin with they were showing up around Fathers Day in September each year and it was a fabulous way to celebrate the day with fresh poached eggs and asparagus for breakfast in bed.  In recent years they began showing up much earlier in August and were a delight and a pleasure to be eaten so soon in the season.

I’d sown some asparagus seedlings in the autumn because I thought it would be a fun thing to do… I’m not sure if I’ll be needing some of them yet… it is still early days in the asparagus patch.

But this year there was nothing in August, so I waited hopeful for September and Fathers Day came and went. Thoughts started to enter my mind but I brushed them away.  Maybe the asparagus had drowned, or rotted away in the perpetual sogginess.   My precious 7 year old asparagus.  I couldn’t bear to believe it.  If it was gone, it would be three years before we could taste the sweet tender taste of fresh asparagus.  If I wanted more pickled asparagus I’d have to buy it!  The suggestion of a barren asparagus patch filled me with sadness.

Oh my goodness – a sight for sore eyes! I want to hug this little spear!

But this morning – in a sea of wet – there standing tall and proud in the middle of the asparagus bed was a thin bedraggled spear.  All was not lost.  If the asparagus could survive that horrendous winter and carry on then so could I.

There is blue sky and there will be brighter days ahead.

As I wait for the moisture to recede I am now full of excited impatience and not downcast in frustration.  The garden will dry out once again and I shall garden on and grow a good crop.  Life is good and I’ll be eating asparagus for seasons to come.

Come again soon – I think I need some kind of indoor project for the next few days.

← It’s slowly drying out
The day the police came →

7 Comments on “Asparagus is my Rainbow”