The shed is empty. Even the shed has a history. I had it built with the winnings from my second attempt at the Yates Vegie Growing Challenge back in 2011. So much has happened since then.

There is a strange sense of peace.  I am ready to leave the garden.  Which is just as well as we are out of here on Thursday.   It has only been 85 days since we made the decision to make the move.  It feels like a lifetime, but also at the same time it feels like it was only yesterday.  Parts of me still feel as though it isn’t real, and I’ll wake up surrounded by all my clutter.  But reality hits as the rooms in the house have a distinctive echo as it is denuded of furniture and all our creature comforts.  There is no going back. 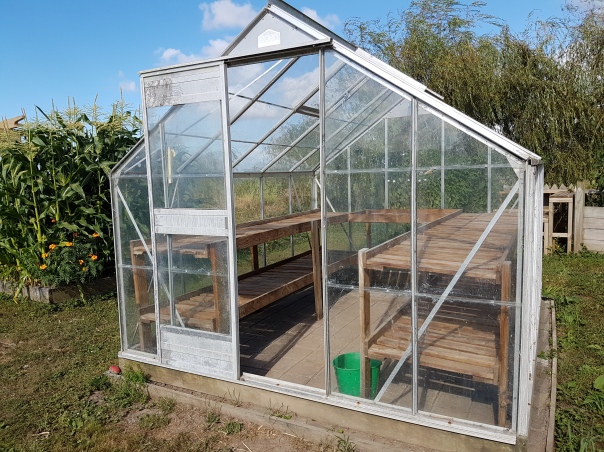 The Greenhouse – my pride and joy. There are waves of sadness when I think about leaving this behind. So many happy times in here.

The greenhouse and shed have been emptied of all of my things and given a tidy.  This was done over several evenings by torchlight as the daytime temperatures this week have been ridiculous, and it would have been foolhardy and harmful to health to have attempted to work underneath glass.  I was surprised how much I had accumulated in the shed and greenhouse.  Many items were things I thought I’d try but never really got on with.  There are so many amazing things on offer at garden centres and such places and under the influence of the horticultural shopping spree, where all sense of self control gets left at the door, I just had to have these things and try them out.  Needless to say, there are considerably fewer items coming with me than those that languished the shed for the last few years.

The swing seat comes down tomorrow and will be re-erected at the new place – somewhere to sit and watch a new garden grow.

The garden itself looks better than it ever has.  I went into this season with a degree of delight as for once I had no projects on the go, no books to write, no training programs to run.  This was going to be my season to just immerse myself in the garden and nothing else.  It was to have my full attention and I would have been in my element.  Then we decided to move.  The garden, while not receiving the full care and attention it deserved, was still a priority as it needed to look nice for the real estate photos, then it needed to stay nice for the open homes, and then it needed to be maintained for the new people to take over from where I left off without wasting any of the harvest.

Large plants and shrubs waiting for the move

As I tended the garden in these last days, there was a little sadness, but more an overwhelming feeling that I was caring for it for someone else and hoping it would be a blessing to them.   I do feel a tinge of sadness that I will miss out on the sweetcorn, that is only a few weeks away from being ready.  The tassels are doing a marvellous job of dropping pollen on the silks and all over my pots that I was sorting on the ground beside them.  Everything is covered in a fine yellow dust, thwarting my efforts to only take clean things with me.  I don’t have the energy to rinse it all off, so I have a hazy yellow memory of the garden to take with me. 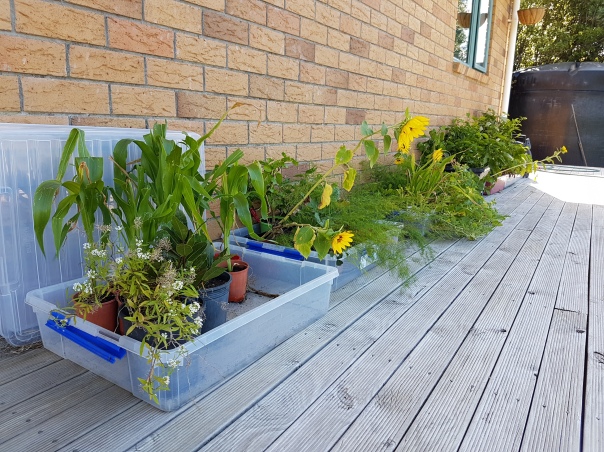 While a little bedraggled and a tad worse for wear, these container plants will soon be the sole object of my attentions as they will be, for the immediate future, my only garden. They won’t know what hit them!

I have been able to sample the first few tomatoes to ripen and I know I made good choices when selecting seeds as they are all so incredible.  Nothing like the ordinary tomatoes most non-gardeners are used to.  They will all be welcome in my new garden.    The new carrot seeds I sowed the other day have broken through the soil surface and it is nice to know there is something for the new people to see there other than bare soil.  The broccoli is ready for them to enjoy straight away, although as I didn’t have my eye on the ball the entire time, it may be necessary for them to pick out a few green caterpillars.  I apologise profusely, but it is an interesting introduction to the reality of homegrown food as opposed to the sanitised versions found elsewhere.  A few holes and bugs never really hurt anyone – just eat around them!

I have to say I love this garden so very deeply and will miss it terribly. But I know I’m leaving it in good hands.

But in a few days from now, I’ll be waking up to a new future in a completely new place with so much potential around every corner.  There is a new garden waiting to emerge under my loving care, with a lot of learning and possible hard learnt mistakes along the way.   The future is very exciting and starts tomorrow…  well actually the day after tomorrow.

← The hardest worker of all.
A Sea Change →