But what about the pumpkins?

The seeds were sown the other day, more than a few weeks beyond when I would have normally sown them.  But I’m not worried because not only is their bed not ready, it hasn’t been filled or even built because I’m still umming an erring as to its location.  This delay has a knock on effect for the irrigation of the rhubarb, globe artichokes and yams.  The final position of the pumpkins will determine the most effect route for the irrigation pipes and therefore the orientation of the header pipe the drippers will come from in these beds.  At this point it could be North, South, East or West!

The irrigation system for the Yams, Globe Artichokes and Rhubarb is in limbo until I know what is going on with the pumpkins.

I have allowed a generous 6 metre long bed, that’s one metre wide.  The plan is to let the pumpkins grow out into a large area beyond the bed, so they can sprawl to their hearts content.  This is the last bed to be built because the last of the soil was sitting on their spot.  I just couldn’t visualise it.  I asked everyone what they thought:  East – West or North – South?  I tried moving it around on my plan and thought I had it right.  Then I went outside and tried to imagine the plan in action.

This looks about right…

The problem is the top end of the garden is narrower than the bottom end. Continuing with the orderly soldier like rows of the bottom half positions the pumpkin bed weirdly in the space available. It isn’t aesthetically pleasing, or it finds itself smack bang in the centre of the path to the chicken coop. Both of these options aren’t suitable and so will bother me for the rest of my days if I rush this decision.

In line with the front of the fruit cage…

The fruit cage – well it will be one when I build a structure over it, but for now it is a collection of fruit beds in various states of preparedness, runs opposite to the rest of the garden.  But it is behind the dome and it is symmetrical within itself and once enclosed will be its own thing within the garden.   It is just the space on the other side of the path to the chicken coop that needs thought.

Now to whack it all together…

It is a good sized space – over 8 metres in one direction, but it tapers so it is just over three metres at the top and about 6 metres at the other end.   It is just where to put this bed without it looking silly.  I don’t really want to angle it along the taper as it will ruin the aesthetic of the whole garden, but logically this will be the best place for it.  But running it alongside the path on the other side will just look weird too as it will be disconnected to every other bed in the garden.

There is plenty of space for the pumpkins to sprawl

I did think about splitting it up into two beds and creating symmetry that way and I think it may just work.  But I can’t really know for sure until I’ve seen it.  I’m a hands on visual kind of a person.  So, I kindly asked my awesome builder if he would mind using his digger to move my mountain of soil to clear the space, so I can ‘visualise’.  Gosh that sounds so airy fairy! 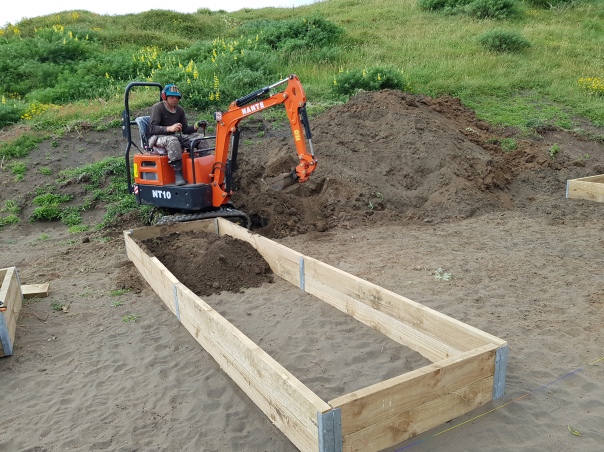 This has to be the best way to fill beds – quick and easy!

Once the space was clear, I ran a few string lines along strategic points.  From the chicken coop door down into the heart of the garden.  Across from the front end of the fruit cage and up the back side of the garden so see where things line up there.  I then eyeballed where the fence would go and then within these perimeters I start dragging planks about the place to find the best fit that makes the best use of the space and looks aesthetically pleasing and balanced. 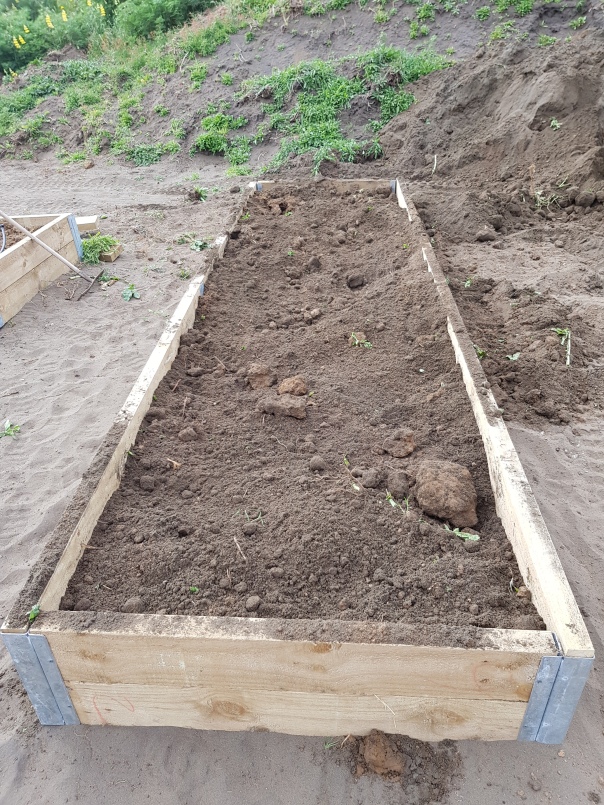 And just like that something I had been procrastinating for several weeks over was taking care of in an afternoon!

I finally settled on two beds not one – for balance.  To fit in with the taper of the space the front bed is four metres, but the back bed looked ridiculous at two metres, so my pumpkin growing capacity increased by a metre square and I get to have another plant which was an unforeseen benefit.   They are lined up along the right side so they are in line with the path to the chicken coop and will run nicely along the angle of the fence line on the left hand side of the garden.  They have a large area between them for the plants to sprawl in a controlled and contained manner.

And all I need to do now is wait for the pumpkins to pop up!

Once that was decided and I got everyone to gather round an confirm my decision – not that I was changing my mind now, I think I was looking more for affirmation “Sarah the Gardener you are a genius and have used this space wisely!”  No one said that though.  They all just nodded their heads and went back on with their jobs.  So, I grabbed some brackets, my drill and some screws and made the beds permanent in no time at all.  Then my awesome builder came back and filled the beds with his mini digger with dirt from the pile he’d moved previously.

And all I need to do now is wait for my pumpkin seeds to germinate.

Come again soon – I can now say without a shadow of doubt there will be tomatoes this October.

← Happy tired
There ARE tomatoes in October! →

8 Comments on “But what about the pumpkins?”