Back in the garden

Posted on December 7, 2018 by Sarah the Gardener

It seems like forever since I have been in the garden. Last week I was at the flower show which was exciting and inspiring, and I loved every moment. This week we had a bereavement in the family and while it was a blessed relief from suffering it was still a very sad and sombre week. And the garden waited on the side line for my return. 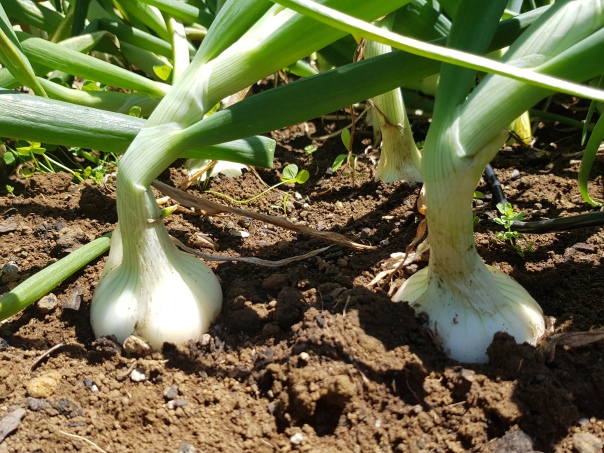 And I think they’re done. I shall harvest them tomorrow.

While I was building the garden, a two-week absence wasn’t a big deal and not uncommon. I’d just grab my drill or my shovel and just pick up where I left off. These days it isn’t quite so forgiving. The plants in there have a funny habit of growing and seem to grow even faster when you aren’t watching them. Things have taken off! 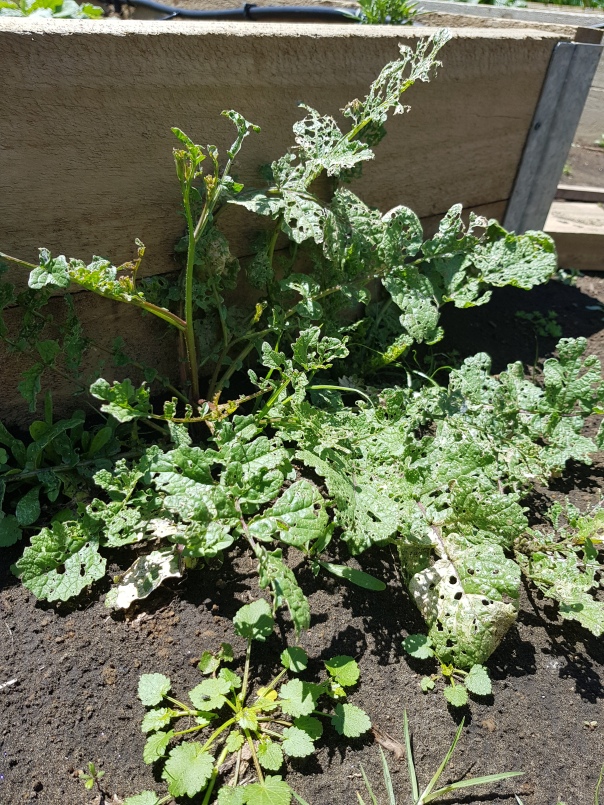 Normally weeds are thugs that cope much better than precious garden plants, but all my weeds look lacy so I need to seek out and destroy them all, to prevent their infestation spreading!

The biggest difference in growth was the weeds and it made the garden look messy. I really don’t like weeds in the garden. They rob the soil of the nutrients I put there for the plants, they crowd out my desirables and to be honest – aren’t even attractive. So, the first thing I did was whip around the garden and clear all the weeds. I’ve done most of the garden today and it was made easy and pleasurable because the soil was loose and soft. Not wanting to waste the stolen nutrients, I popped the weed seedlings into the compost. All except the grass and the thugs. They went into a different bucket and were dumped far, far, far away. 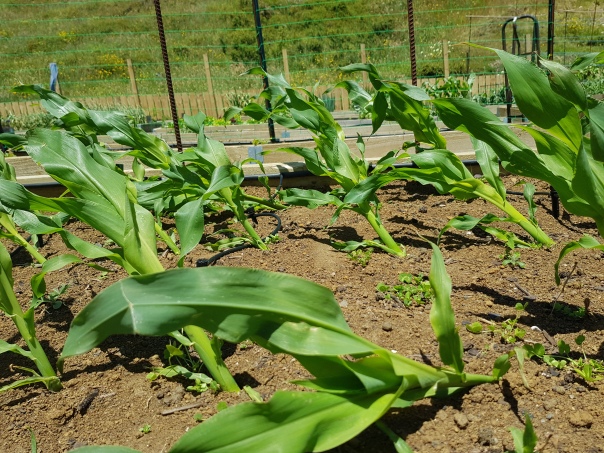 After a week of wind, the corn was starting to think this was their natural position. It didn’t take much to convince them otherwise. I will have to activate my string control system to stop further leanings.

As I went around, I made mental notes and tended to the needs of my plants. The brassicas have been hit quite badly with a leaf miner and as it is in the leaf structure, I may need to spray with a systemic to take care of it. The harvest won’t be ready for ages. The problem is one of the common weeds around here is a brassica plant and looking around, all of the weeds have been reduced to lace. This is a good reminder to make sure weeds that could be hosts for pests and disease are removed from the vicinity. 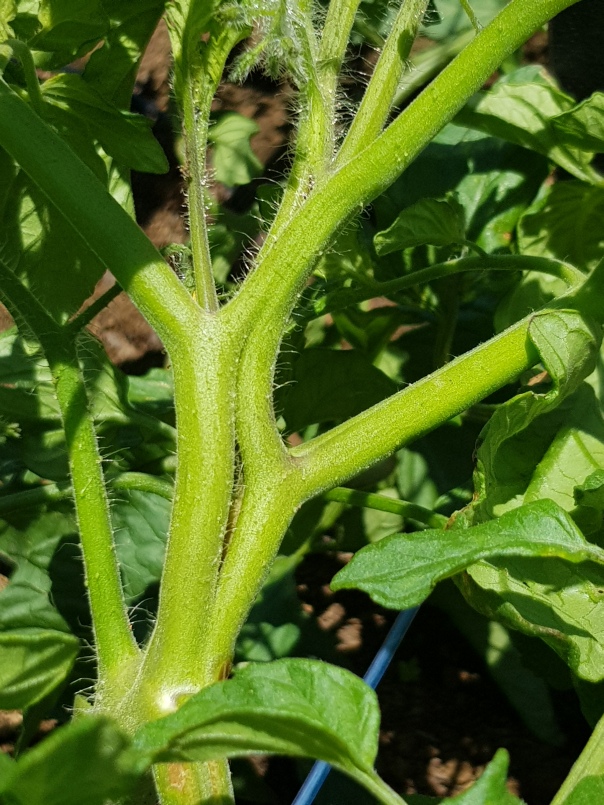 You go away for a couple of weeks and your tomato plants do weird things. The stem seems to have split and then re-fused back together further up. I shall watch this plant with interest.

When I left the tomatoes were too short to tie into the wires of my tomato support structure, but in two short weeks, they were tall enough to tie into two wires. I also managed to nip the laterals out. Some were at the point of almost being too big. I never end up with perfect single stem tomatoes! 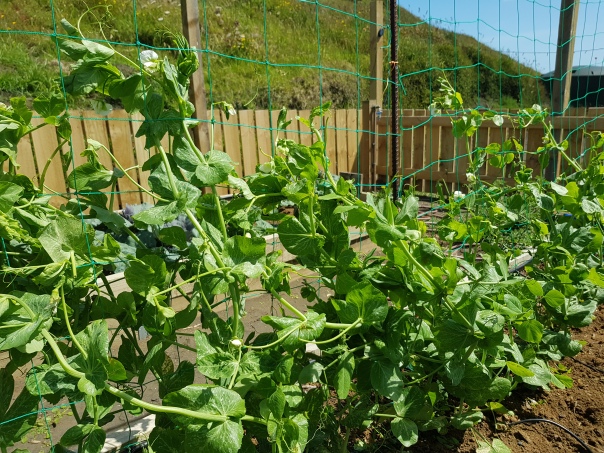 I may have to give up my favourite Alderman Tall peas and stick to the dwarf varieties, they are not coping well in the windy conditions.

The Hunter River White Onions seem to have been blown over, but then on closer inspection the Pukekohe Long Keepers, which take longer to grow, haven’t. So, while it was quite windy this week and all my corn was at a jaunty angle – easily remedied by firming them into the soft soil in the preferable upright position, it was easy to just think the weather was playing games with my crop. But then it dawned on me – they are actually ready. The wind may have helped but they would have gone over any day now anyway. So, I made a mental note to harvest them as soon as I can. 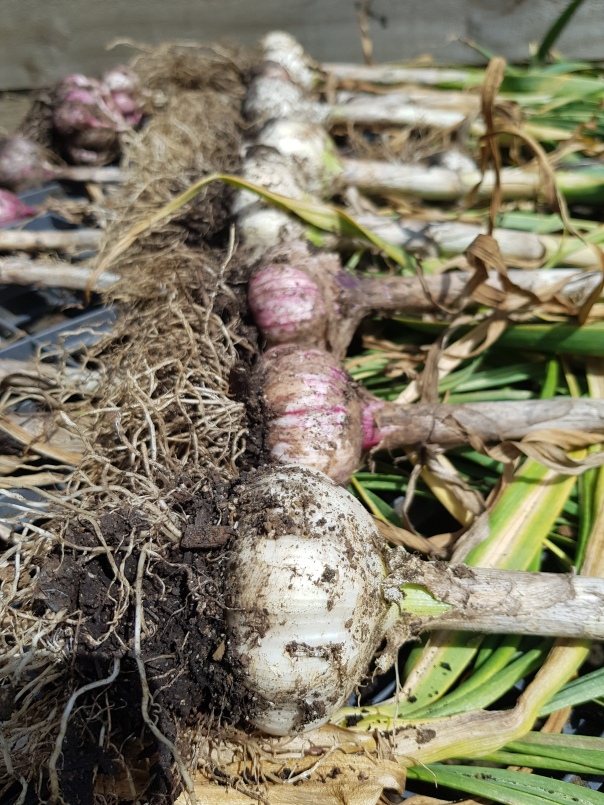 Not a bad crop, considering I left it a little too late. They are the biggest I’ve ever grown. Things seem to like in swamp soil here on the coast!

Like the onion, the garlic was acting funny. I noticed it before the busy started and made a mental note to give it a feed. It was just the early garlic. The mid-winter stuff is fine. While I was away, I thought about the garlic and realised there wasn’t a problem – it was also ready. Not all ‘poorly’ behaviour is a bad thing. Unfortunately, it was probably two weeks too late for the Purple garlic as there was no protective coat and the cloves had started to separate so they won’t store well. I’ll have to use them first. But I have to say it is the best and biggest garlic I have ever grown! I can’t wait to see what the mid-winter garlic is like. 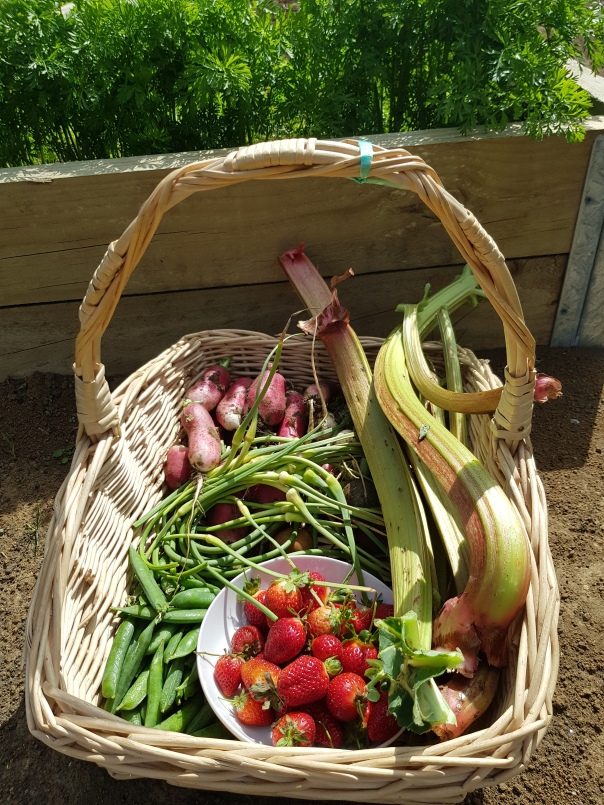 Not a bad haul for this time of the season…

I also harvested the first decent lot of peas, my entire crop of radish that got out of hand while I was away, a bowl full of strawberries and I took the scapes off the top of the garlic I harvested. The wind had been toying with my rhubarb as the leaves are huge and were acting like sails, they were pretty much coming loose so I helped them to find their way into my basket.

The big harvest isn’t that far away, but I still have things to plant out, so I’d better get a wiggle on.

Come again soon – Summer is here and the garden is good.

← Showing off the show
Radish Relish →

4 Comments on “Back in the garden”