But that is the beauty of the garden – it is completely forgiving.  Plans can be made, but nothing is set in concrete – except the things actually set in concrete like fence posts!  Over the last year I have spent ages pouring over my plans, making adjustments, then working on the crop rotation and then hoping to never have to plan again.  It can be a logistical nightmare and I get myself in a muddle and come to a great sense of relief once I can put the pen down and know my plans are sound.

The new carrots are settling in, in the old potato bed

Except that isn’t always the case.  My garlic should be in this month and I’m running out of month.  But I have wrestled with their new location.  They are supposed to follow the carrots, parsnips, beetroot and fennel for reasons I have long forgotten.  The carrots follow the potatoes as it makes sense to have the nicely dug over soil, required to ensure every last spud is removed, to grow the carrots who like it nice and fluffy without lumps and bumps.  That is a logical reasoning.  And as there are no spuds currently being grown – well not in the beds – I picked up a bag of seed potatoes at the garden centre just because they were there and will grow them in pots over the winter…  The old spud bed is now nurturing juvenile carrot seedlings that reflect the more mature ones still lingering in the bed beside it, out staying their welcome as the garlic are ready to set up home in a spot not ready for them.

I can’t sacrifice my parsnips for the garlic when I haven’t even made a dent in the row? Parsnips you can stay. Garlic find somewhere else!

So I cast my eye over the row – what else could be done?  The bean bed beside the spuds on the other side still has beans lingering in it.  This was also completely unexpected as the snake beans are still going great guns and then at the other end of the bed, the Lima beans I picked up at a bulk food shop with the thought…  ‘hmmm….  I wonder…’ are still at the lush green foliage stage with a multitude of flowers and a few beans in the early bean stage.  If they are to dry on the plant, then they’d better get a wiggle on.  So I can’t give up on my beans.  Not yet. The Lima beans are taking ages and are a long way from being a dried bean!

Beside that are the leafy greens, a mix of rainbow beet that will be there until the spring when they will begin to bolt and while this will remain the leafy green bed for some time, it also has some fledgling leafy greens to provide some winter goodness.  So that is not an option for the garlic.

The cucumber has made a great last effort but it is pretty much all over ….

The far side of the row is the asparagus and no one is leaving this bed, not for another 20 years or so.   That leaves me with a couple of options – I could put them back in the bed they just came out of, but the painted mountain corn is still being dried on the plant and while only a couple of weeks will do it, the garlic is getting urgent.  Besides its not good to have them in the same place as there are root rot related diseases that can build up.  And then when you think about the next season what is the knock on affect.  The cucumbers were supposed to go in there next.  But the garlic won’t be out of the garden in time for the cucumbers to be planted out – so there’d be a bottle neck.

…. or is it…. can one late season cucumber stand in the way of an entire crop of garlic???

So that leaves one possibility.  The cucumbers bed between the leafy greens and the old garlic bed should have come out ages ago, but the brave leaves put on a second flush and produced another couple of cucumbers.  Who was I to stand in their way?  But I think it is time to call ‘time’ on their efforts and take down the frame.  This would create an empty bed in the right window of time.   The cucumbers next season would move on to the old garlic bed as usual and next season will not get into a complex relationship with the carrots.  I’d have all winter to eat the carrots before transitioning them across to the new / old potato bed.  So it would work going forward.

The peppers are loving their location way too much, but who am I to argue. The onion overflow will need to find alternative accommodation

But will the leafy greens wait for the garlic to come out…  I think they’ll just have to.  The spinach may have to maybe move to the salad bed in another row as it can bolt quickly especially in a hot dry spring which is a possibility.  But the rest can wait.  Garlic planted in autumn is harvested early anyway so it should work. 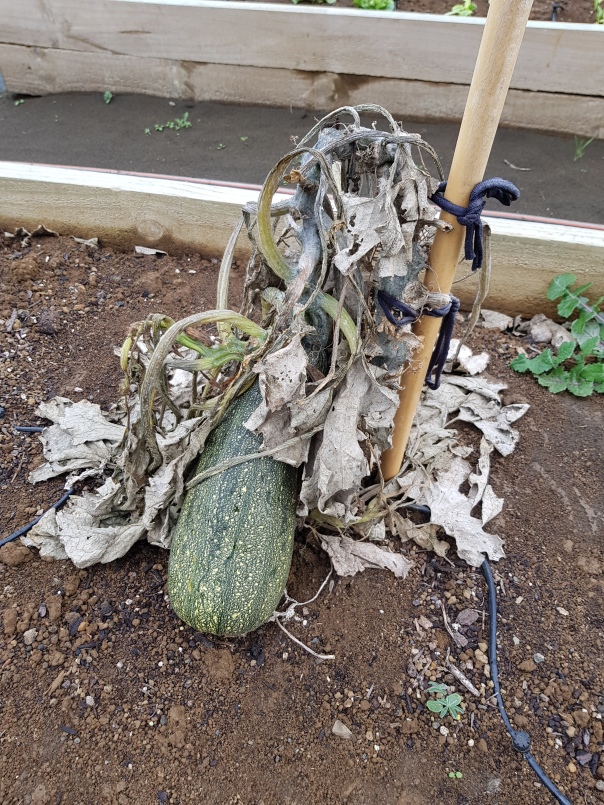 I think it is fair to say the zucchini are done…

Ok decision made.   And without explaining the similar problem I have with my onion overflow bed, I’ll just say after much pontificating, the zucchini are on their last legs and can come out and make room for red onions, shallots and leeks.  This also moves them back in their crop rotation one slot but if the peppers weren’t enjoying life so much it wouldn’t be necessary. 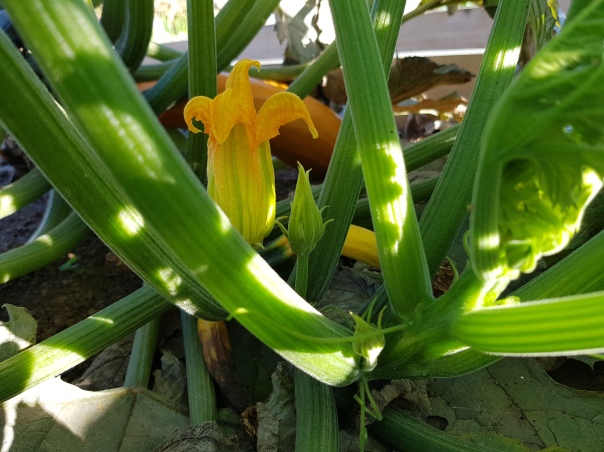 … having said that… this plant still has signs of life

Hopefully this will allow for a smooth transition between the seasons and hopefully will be the last time I have to rejig my plans.

Come again soon – things are really cooling down, I’m back to wearing socks and a jumper!

16 Comments on “Change of plans… again”