I’m really beginning to get my groove back and working in the garden is so energising.  I have switched things around – normally I’d get on with the indoor work before rewarding myself by heading outdoors.  But often I’d be so bogged down by the indoor stuff I’d barely get out the door to work on the garden, and then I’d convince myself there wasn’t enough time left in the day to really do much so I’d give the garden a spot of lip service and wonder why I wasn’t feeling the love.

I have to confess, I’ve been snacking on autumn raspberries and not sharing! There aren’t many as the plants went in late and the house is so far away from the raspberry patch…. and they are so sweet and so good. I look forward to an abundance next season.

This week I have been heading out there first and then doing my commitments indoors in the arvo, when the wasps come out.  They are still hanging out in the garden in large numbers, but I have found we get on just fine.  So long as I don’t bother them, they don’t bother me.  Although I do worry about the wood they are stealing, over time this could be huge.

I’d say these leeks are almost ready for eating – if you like a tender young thing!

So today I took care of the needs of the Tuesday row.  At first appearance there wasn’t much going on, but looks are deceiving and I was pottering about in the garden until well after two pm.  The half leek half wheat bed didn’t need much, just a quick weed and feed and my lonely bedraggled zucchini is still alive and has some baby zukes that will hopefully reach a size worth eating.

I’m quite impressed with this peanut harvest. Although I’ve probably eaten this much in a single sitting as a dried roasted version, involuntarily while watching a movie!

The odds and sods bed was fun because the peanuts must have reached their overnight low temperature that is acceptable to them as their leaves had started to go brown.  It wasn’t a frost as everyone else is still ok.  But that meant I could dig them up.  I love digging up peanuts, it is really exciting because you don’t know what you will get.  By the looks of my haul, they like growing here. Hooray! 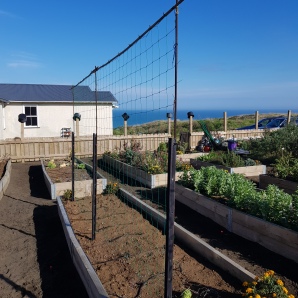 Well I don’t think the tiny melons lingering in the bed will come to anything more so its time to bring down the trellis. 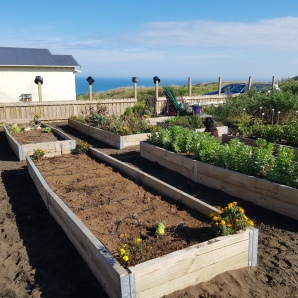 And now the trellis is gone. You may notice in the background a convenient way I discovered to dry the pots I washed for the spuds!

The melon bed got a makeover – I finally took down the netting and put it away for next time.  It is a bit of a phaff fiddling about with all the knots, but I will thank myself for it next season when I have to get it out again.  I then gave the bed a bit of a tickle, consulted the plan and sowed lupin seeds as a cover crop to add nitrogen rich organic material in preparation for the sweetcorn that will be hanging out in the bed next season. 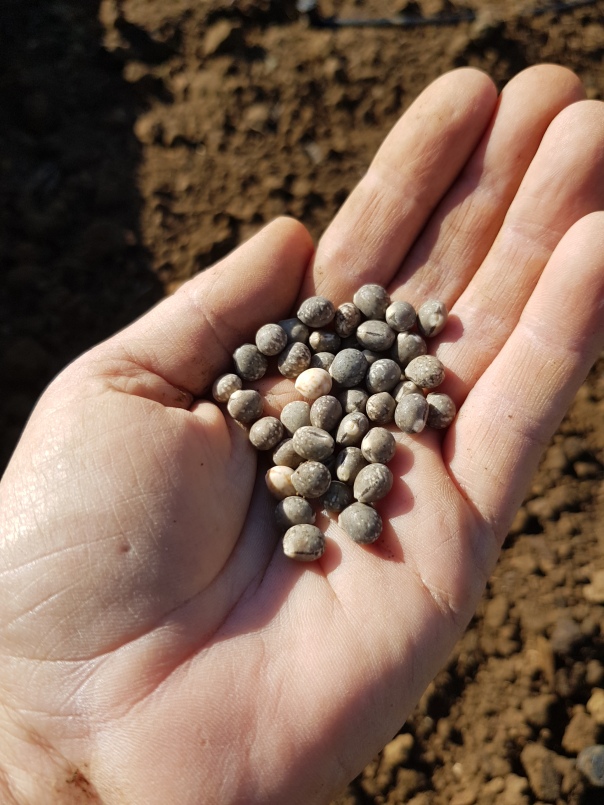 These inert looking lupin seeds have been unleashed upon the empty bed and will bring about an abundance of green manure! Grow little seeds, grow.

The other beds, with salad, the broad beans that are supposed to be cover crops but started flowering so may just be an unexpected harvest of beans, and the peppers just needed a handful of tiny weeds removed and then a good water and a quick feed and the row is looking dapper. I also hoed around the beds in the row and there is something calming about this act.  You get to slowly contemplate the plants in the beds beside the paths and think about the garden as a whole.  I do enjoy this seemingly mind numbingly boring chore.

If I remember correctly these are 14 Litre pots and I have probably squished in too many spuds but they are little and I’m not made of pots!

The last job of the day was to pop the spuds into pots.  I’ll keep them in the dome over the cold of the winter so we can have fresh spuds sooner rather than later.  Oh, and while we are talking about waiting for things – the first signs of garlic have popped up!  Yay!

Be still my beating heart – the very first crops for the 2019 – 2020 growing season have made their entrance!

Tomorrow it is the turn of row three – the Wednesday row and I should think about some other little project to go with it so I’m not just treading water in the same spot but making headway.  And speaking of water I really should check the weather forecast, it has been suspiciously nice for too long, surely there is rain on the horizon?