Posted on February 7, 2020 by Sarah the Gardener

You can always tell it is a good time to harvest your sweetcorn when you notice the rats are getting into it!  I have a bit of a rat problem, but I am currently deliberately feeding them with goat food, which they seem to like, based on the very large hole in the goat food container.  The goat food is currently being stored in the back of my car, of all places, to remind us to go and buy a metal bin.   I would much prefer to feed the rats in a known area than have them run freely around the garden.  Besides I need to find a good place to position my new fancy rat trap that sends my phone a body count each time it zaps one and if I create a feeding spot near it, then it should work out well.

This is a sure fire sign the corn is ready… blimmin rats!

But this isn’t about the rat problems.  It is about a completely different problem – the sweetcorn.   The poor wee things, they had such a rough start and every time a storm rolled through, I had to stand them back upright.  It happened far too often this spring.  Then I let my guard down.  There hadn’t been a storm in a while, the corn established and was growing strong and straight.   It wasn’t as tall as I would have liked but considering the difficulties they had to face early on, I was ok with it.  It was better to have them there than not at all.  The tassels were proudly unfurling above the plants and I could see a peep of silk poking out halfway down the stalks.  It was going to be ok.

That poor corn took a hammering… I am truly surprised there was any kind of harvest.

Until it wasn’t.  I was completely blind sided by yet another storm.  The timing couldn’t have been worse – as the pollen was beginning to fall from the silks.  I think my pollen ended up pollinating the neighbouring corn as it was picked up and carried off.  I didn’t imagine much fell gently to the silks below like it should have. 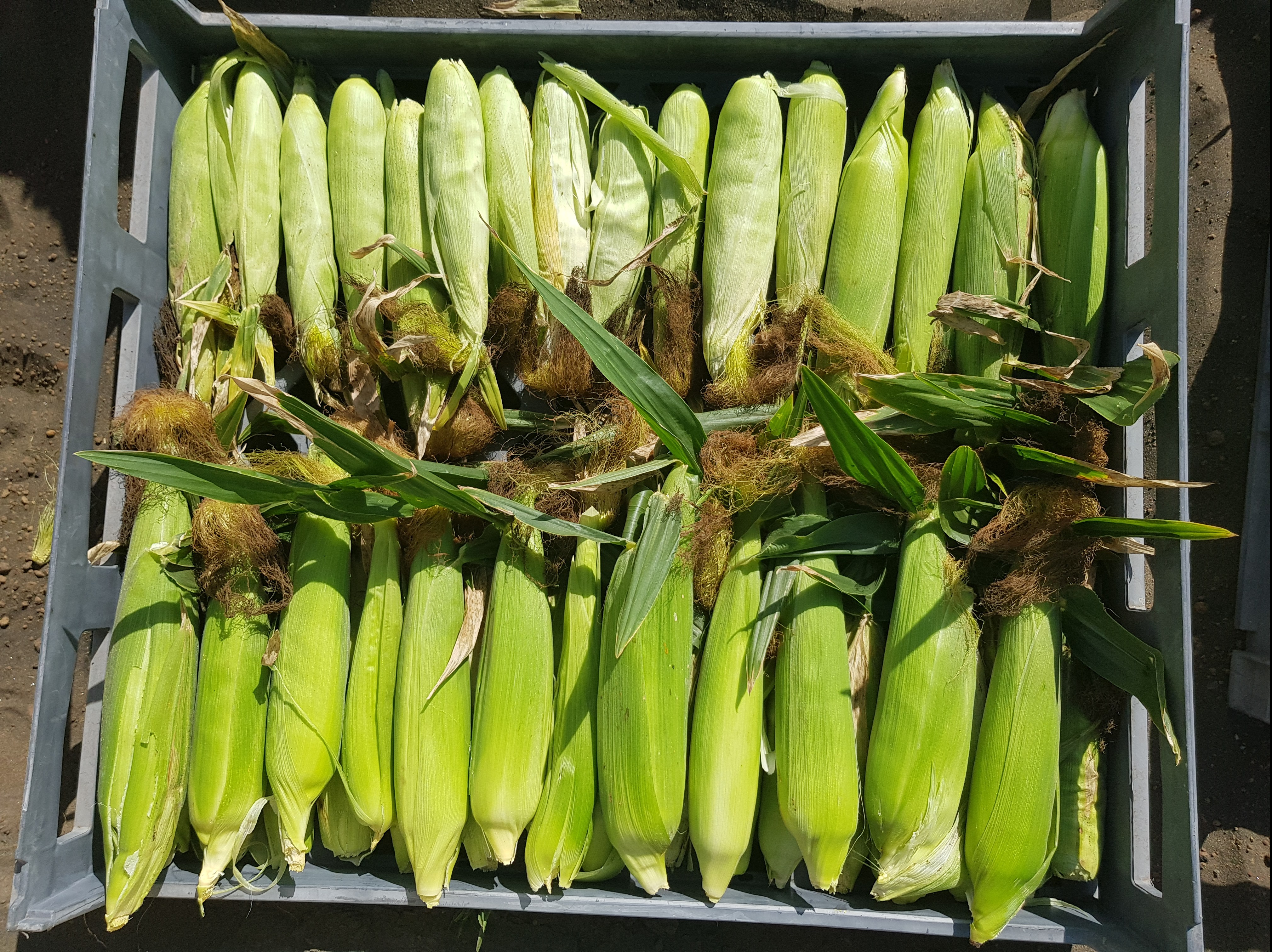 The sweetcorn harvest is loaded with anticipation – a little like Christmas. The expectation is high, but it is only when you unwrap the husks do you know just how well those weeks and weeks of tending the plants has turned out.

When I felt brave enough to peek through my fingers and look at the damage I was dismayed.  The stalks were all akimbo.  They were leaning every which way, and many had been snapped.  My instinct was to just rip them all out and be done with them.  However, that would be just as bad.  The garden would have an empty spot, grinning at me like a gapped tooth 6-year-old, reminding me of the harm done.  So, ignored them for a while, unprepared to deal with the waste of time, effort and potential.

Sometimes beggars can’t be choosers and I certainly won’t be wasting this ‘bountiful’ harvest.

Then I noticed some of the plants were beginning to rally, they were making their own way back to vertical.  So, I left them to it in the hopes that something could be salvaged from the disaster.   In the meantime, as a back up I went to the garden centre and cleaned them out of their last corn seedlings and planted a new crop to increase the chances of fresh sweetcorn from the garden this season.  They are almost at the point of sending out the tassels and I’m watching the weather forecast with bated breath…  surely it wouldn’t be possible to get another storm at the same crucial point, but it has been a cruel summer and so I’m kind of expecting it.

Waste not, want not – all those individual kernels made a good batch of creamed corn.

So that brings us to now, with the rats chewing down on a couple of cobs.  So, I did the feel test – the one that should tell you the cobs are full and fat and ready.  If I could read braille, the intermittent lumps and bumps I felt could possibly be sending me a message.  The corn was kind of poking out from the stalk at a jaunty angle, but with incomplete cobs, they weren’t compelled to push out to make room and besides, everything was at a jaunty angle.  The silks were dark brown and crispy, but this can be quite subjective – how brown and crispy is brown and crispy enough? and how long has it been brown and crispy? because I wasn’t paying attention until the rats alerted me.  So, I did the final test and pulled back the husks and gently pierced the first kennel I could find, and a milky juice flowed from it.  Perfect – the time was right now.  The rats knew what they were doing. 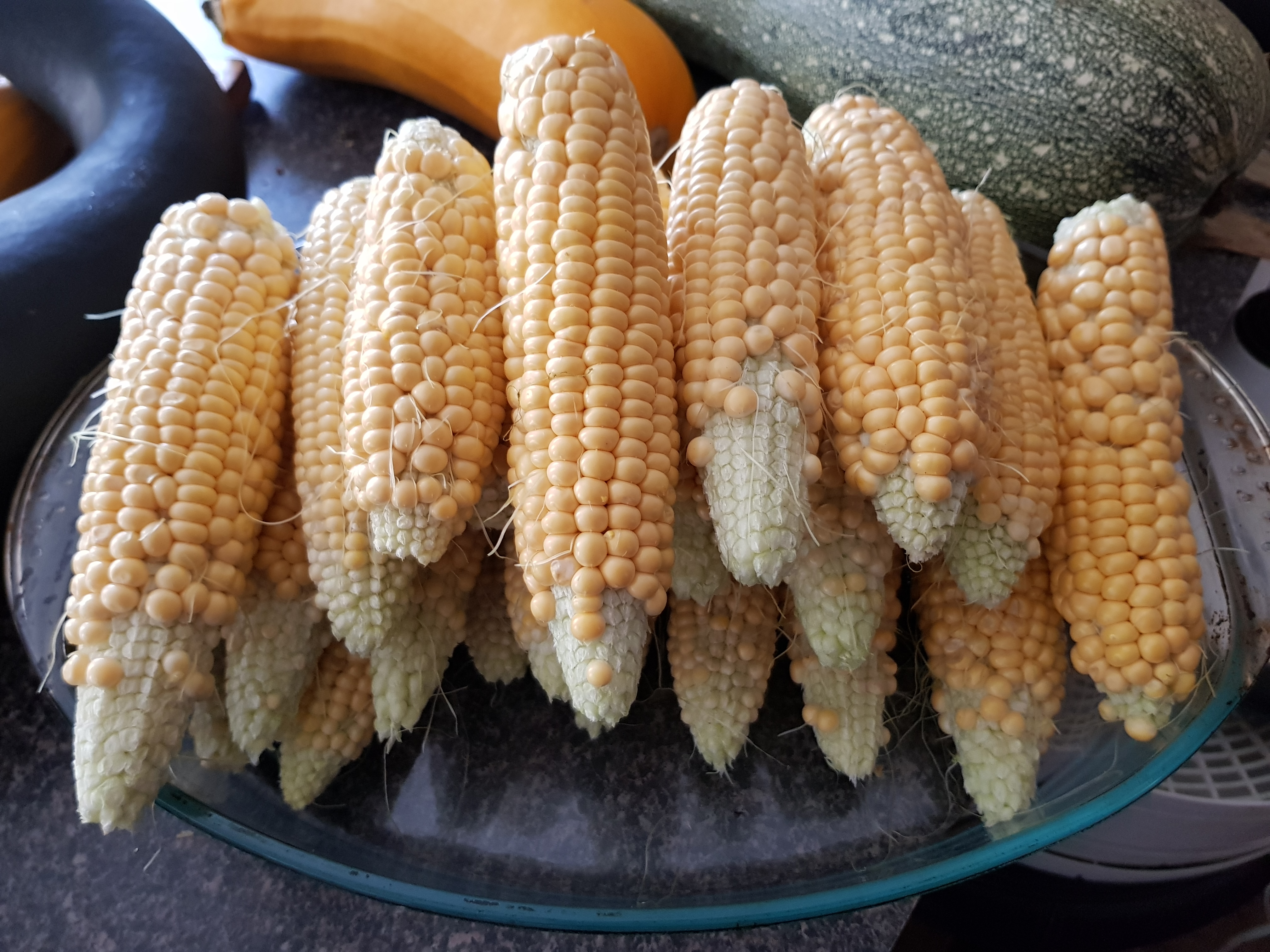 And these are the good ones! I guess I can’t complain, under the circumstances.

I wasn’t expecting much and got more than a fair share of toothy gapped cobs, but some did surprise me as they were 70-80% full – although in some cases only down one side.  I managed to get a harvest of sorts.  Normally the mostly misfired ears went to the chickens.  Normally there aren’t that many, but when it is the majority of the crop it is like that – waste not want not, and I cut every last kernel from their cobs and managed to get 500g of creamed corn.  I froze it, and the decent looking cobs, within a couple of hours of being harvested so it will retain that sweet delicious flavour to bring sunshine to a winter day.  We also ate some for dinner and the good thing is you don’t have to be pretty to be good.    The flavour made the drama dissolve away into a distant memory.

The back up corn crop is doing ok… so far so good, fingers crossed at all that…

Oh – and there was another upside that made me feel great – there were no nasty surprises from the nasty, nasty corn ear worm.  There were none!   This is thanks to having some spray left over from tackling the Tomato Potato Psyllid in the tomatoes.  What I used was probably a bit overkill, but giving each silk a squirt of pyrethrum each year will definitely become a part of my annual routine.  That particular pest is disgusting!