I have a garden group visiting the garden today, probably the last for a while. But I do love having groups coming to visit, first and foremostly to share the garden love, as there is always the opportunity for it be a wonderful exchange of ideas.  A throw away comment made by someone that starts with “have you thought of…”  can completely revolutionise the way things get done in the future. 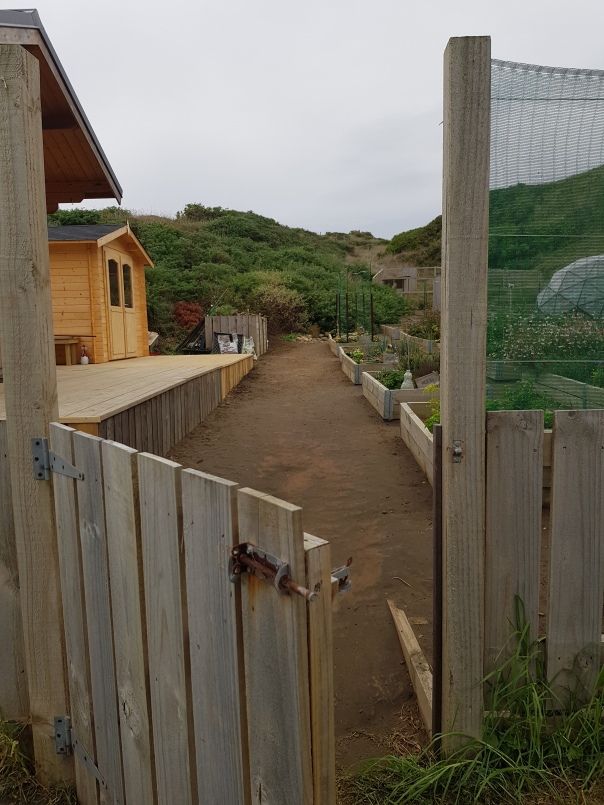 This is a never been seen before view. With the deck extension for the new shed, it has meant the whole length of the garden path – passed the compost bins and up to the wild life pond has become free of clutter and looking good.

But it is also a fabulous opportunity for me to get my A into G and give the garden a deep tidy up lest it shame us all.  Especially at this time of year when the garden is grinding to a slow but inevitable halt and there are signs of decay and desolation everywhere.   Don’t get me wrong – there are plenty of plants in full health and they will do us proud as they are shown off in their full glory.  But there are others that aren’t so flash – like the sweetcorn I harvested but left the stalks still standing so the garden didn’t look so empty.  It is autumn after all… 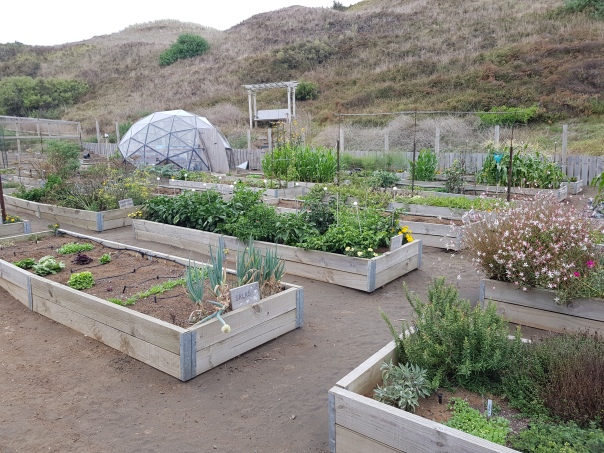 Not exactly in full flourish but looking good for the season it’s in. 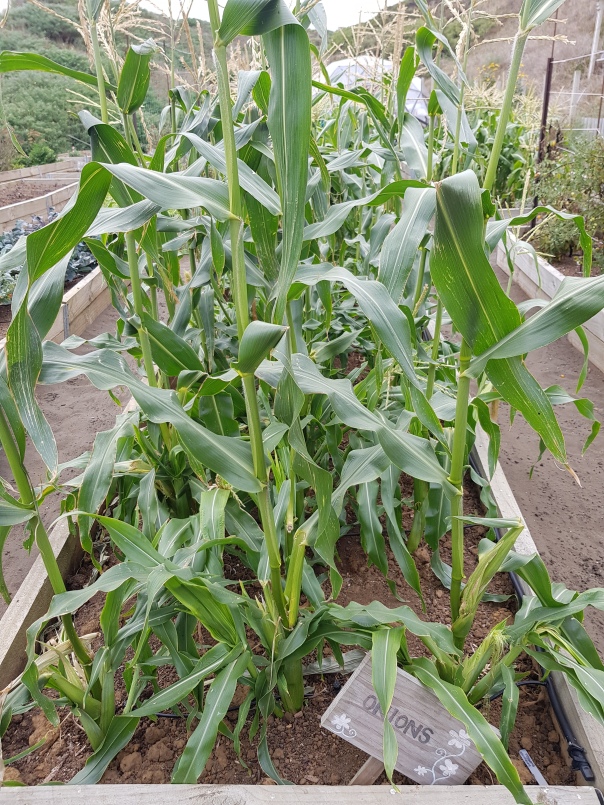 Don’t look too closely at the sweetcorn, they are more of a prop than a plant at this point.

And the tomatoes are still hanging in there in their disease ridden state.  To add to the Pith Necrosis slowly spreading its way through the patch thanks to my meaningful but harmful pruning to improve airflow with secateurs not cleaned in between plants.  They also have the pysllid problem, but as we are well past the glory days of peak production (minus the peak production) I’ve become a bit lax in the battle.  And now as we enter the humidity of a warm moist autumn, I noticed powdery mildew is making an appearance.  But surprisingly they are still producing and ripening some fruit so I will leave them until the bitter end and all going well I will end up with enough stashed away in the freezer to make a batch of tomato relish to get us through the winter.  And then I will pull all the plants out and load them into the fire pit and they can symbolise the end of this horrible season with bit of a celebration as we come around the fire to enjoy the lingering warmth of an early autumn evening. 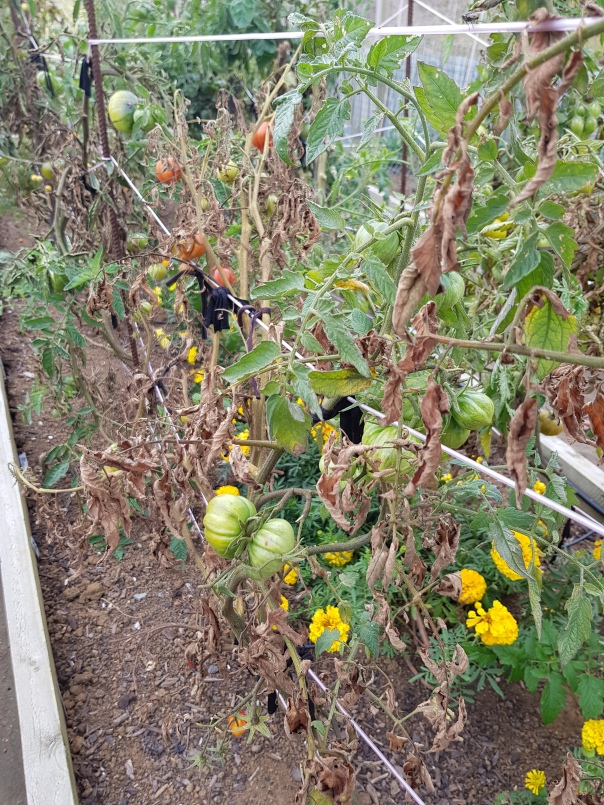 This is a sorry looking patch of tomatoes, but while there is still fruit being produced then they can stay. 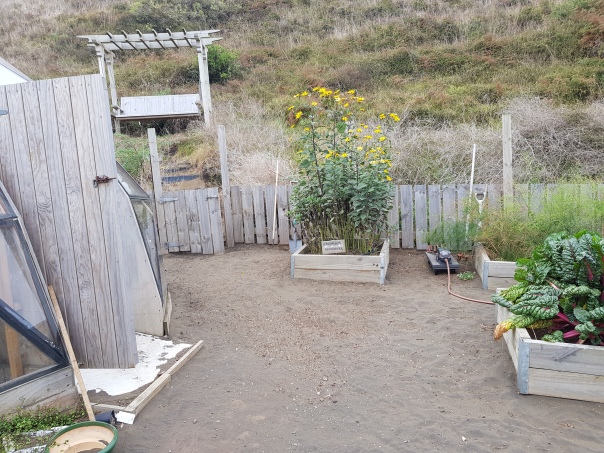 Much to my shame this corner of the garden has never been clear of clutter … ever!

But aside from the plants, there is also an entire growing season of neglectful behaviour to clear away.  Without a reason this neglectful behaviour has the potential to become a permanent feature.  A stack of empty pots left in a spot that was convenient at the time, can become the place were all empty pots end up over the season – a place where they were never intended to be or stay.   Weeds in far corners that have been allowed to gain a bit of a foothold are ripped away, revealing a potential project as ideas are tucked away for another day as the cleaning continues.  Often these ideas can become a distraction to the cleaning and tidying because a project is always much more fun than cleaning and tidying.  But with people coming, you just need to push on and get the job done. 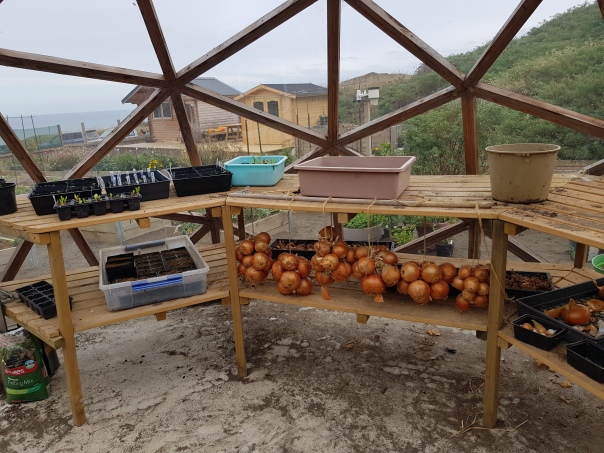 This is the tidy side of the greenhouse. Behind the image are shelves chocked with clutter, but I can’t move them all just yet so they are best left where they are. 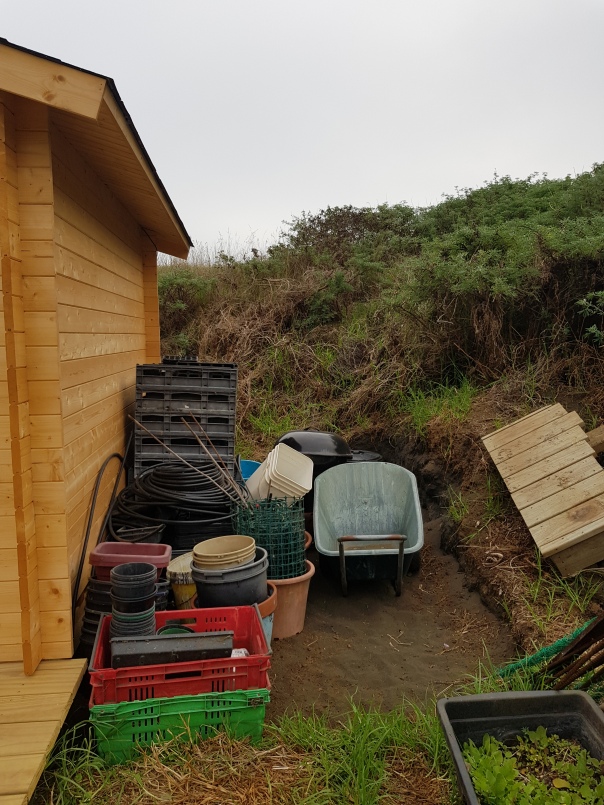 This is my new corner of shame, but I can’t do anything about this until I’ve taken care of a ‘that’

And so, the garden has never looked better.  Well it has looked better – in times when the plants were actually in full healthy and lush in the height of the season, which makes you turn a blind eye to any mess.  But now in the almost nakedness of the garden, it has become tidy!  There are still corners of things to be done, as there are still projects on the go and so I can’t put this away until I’ve done that, and that isn’t ready yet because I’m waiting for something else.  But on the whole the garden is looking good… ish. 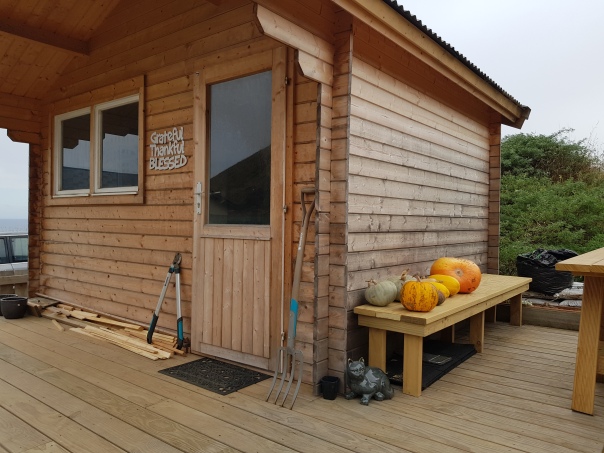 I may need to move the pumpkins for now so the visitors can have somewhere to sit. I was also able find the cat statue I bought to remind us of poor wee Toast the Cat. She will be remembered better up on the deck.

It isn’t the best weather for a visit- it’s a bit gloomy but at least the rain that was forecast has been pushed off for a few more days.  Having said that we do need the water in the tank sooner rather than later so I would appreciate it if the boffins didn’t keep changing their minds.

Come again soon – with a tidy garden there isn’t anything left to do for the meantime except exciting projects.

3 Comments on “Looking its best”

Leave a Reply to Sarah the Gardener Cancel reply 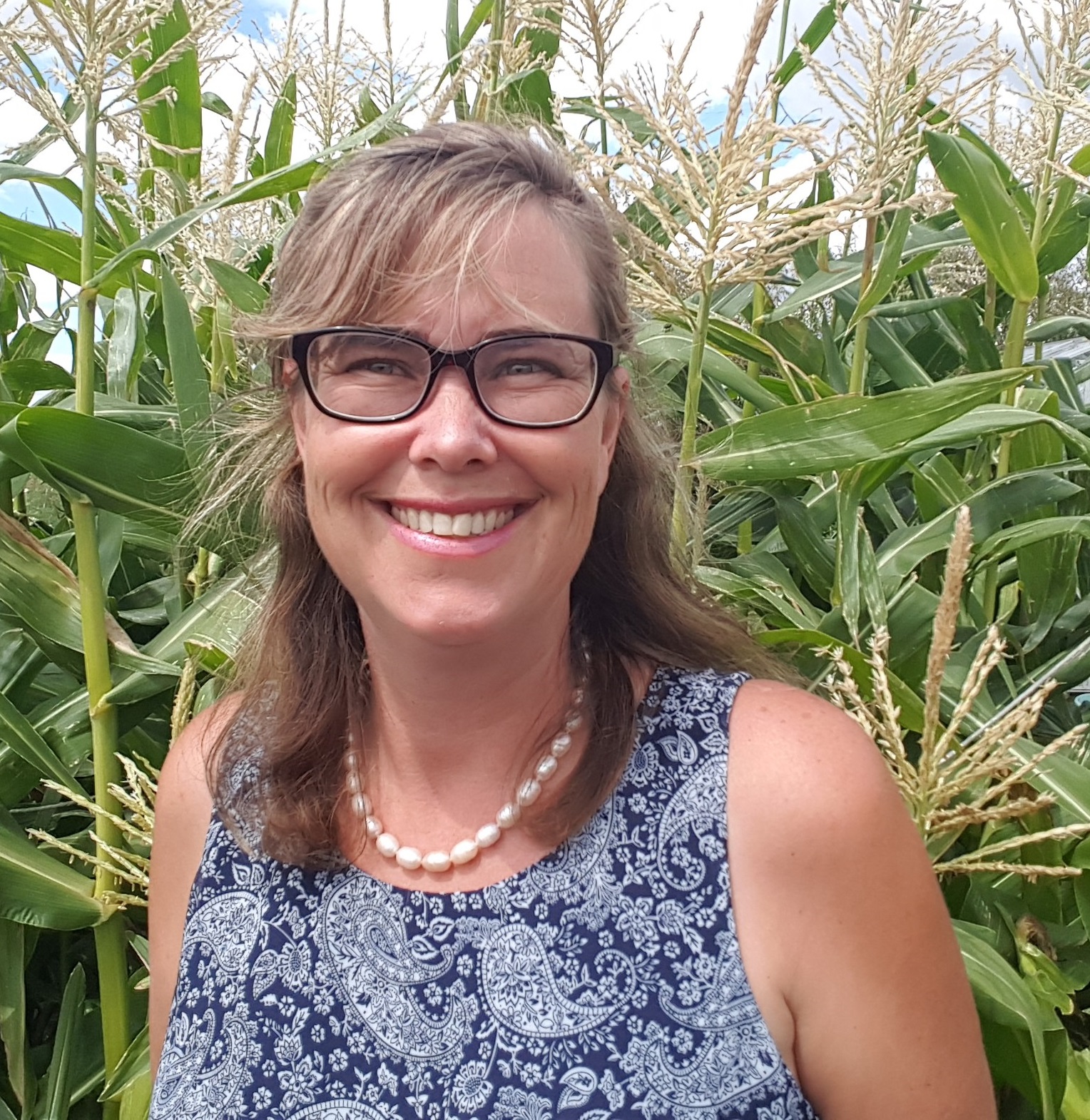 Welcome to my garden