When does the new season start?

This is always a bit of a grey area as to when the new season starts and the previous one ends.  It makes sense to think that when harvesting stops from plants planted in the spring is a logical end, however I still have zucchini flowering and producing edible morsels– albeit slowly and the brassicas are still going with the side shoots like gangbusters providing more than we can keep up with, long after the first head was harvested.  But by and large the garden is mostly empty and bereft of all trace of summer.   It would be easy to say once these summer crops have gone the season is over.  But yet it lingers.

After weeding the bed, use sharp secateurs, cut the fronds down to ground level.

It would be great to have some kind of clear delineation between the seasons, like all empty beds, enriched and refreshed with nutrients ready for the tender young plants in the spring.  Unfortunately, nature isn’t that clear cut.  While the stragglers from summer are languishing unrepentant, new crops are moving in.  There is an overlap. 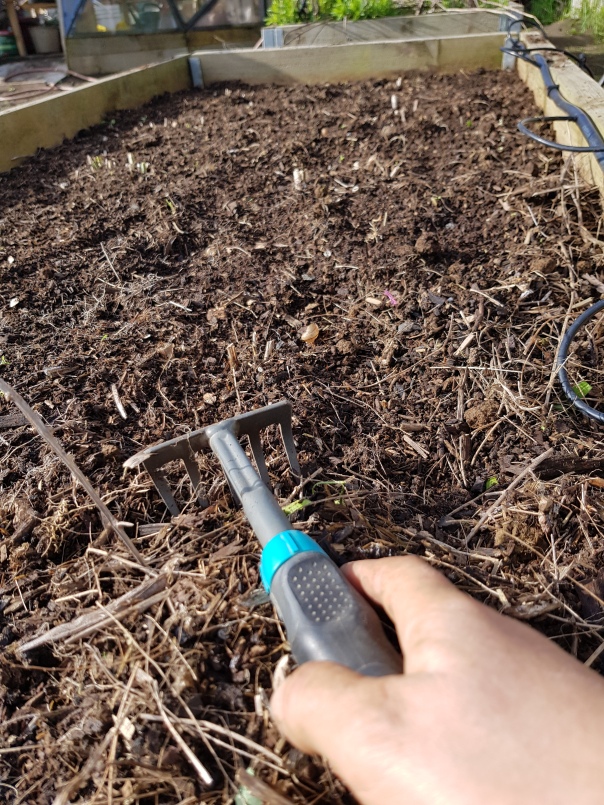 Rake away the old debris, taking care not to harm the crowns.

If we put aside the stragglers as part of a previous era, the question still remains, when does the new season start?  Does it start with the early garlic planted almost traditionally on the first of May?  It would be easy to discount this as this is still technically autumn and more importantly, still firmly within the first half of the calendar year.   Onions find their place in the garden on the shortest day which would seem like an ideal transition, but according to the calendar we are three weeks into winter already and besides seed sowing and garden prep takes place many weeks earlier, back in the autumn.  While it is a strong candidate for marking the change in season, I have decided, in my garden, that honour belongs to something else.

Mix up compost and other nutrients to replace what has been used to sustain the asparagus over the new growing season. I use compost, blood and bone, sheep pellets and dynamic lifter as per the instructions on the packets. Too much is not a good thing.

The asparagus. This isn’t an ordinary crop; it is once that carries a lot of reverence and expectation.  To have asparagus in the garden in the first place, requires so much from the gardener.  The care and maintenance required from a crop that can’t be eaten in the first three years making the wait worth its while is indication enough of its status in the garden as a luxury crop.

The compost and goody mix is then added to the bed in a nice thick layer.

As the fronds of the previous season begin to fade to a golden yellow around the start of winter, the time comes to cut them down to the ground.  A tall stand of growth that had presided over the garden all summer – or since harvesting ceases after Christmas for mature crops.  Like the changing of the guard on a chilly day early in winter, the task of removing the foliage is undertaken with a degree of excitement.   All the energy from the summer sun has been taken down into the crown to bring forth a strong and bountiful reign in the new season.  The addition of compost and other nutrients in a nice thick layer is like making an offering to please this divinely tasty plant.  The addition of mulch to prevent weeds is like applying a cloak to prevent invaders spoiling the garden. 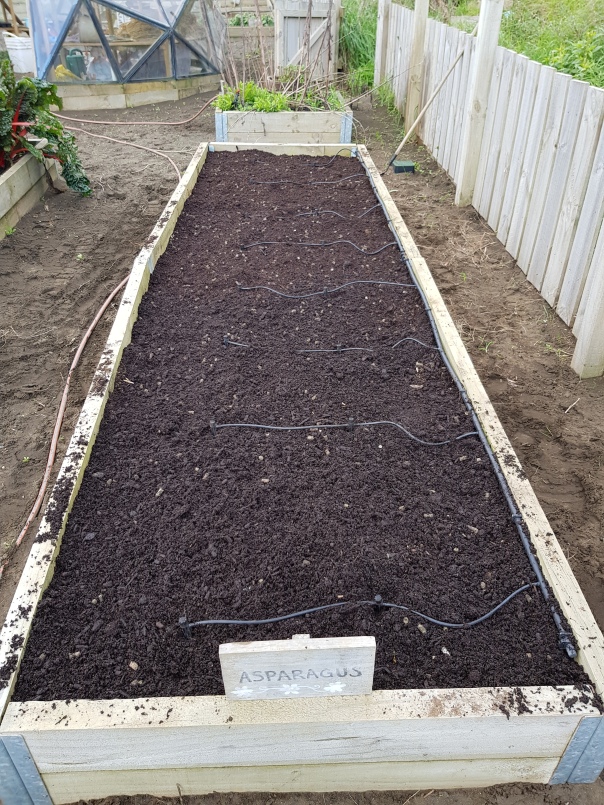 The irrigation is then put in place to ensure the crop stays well hydrated in dryer times.

Not only is there a degree of pleasure knowing the sun itself has been captured and held deep with the plant during the previous season, but the anticipation that as the last days of winter turn themselves into the optimistic days of spring, the first crop of the season presents itself as tall green spears, standing tall and proud.   It is the first majestic crop to rise above the soil for harvest. 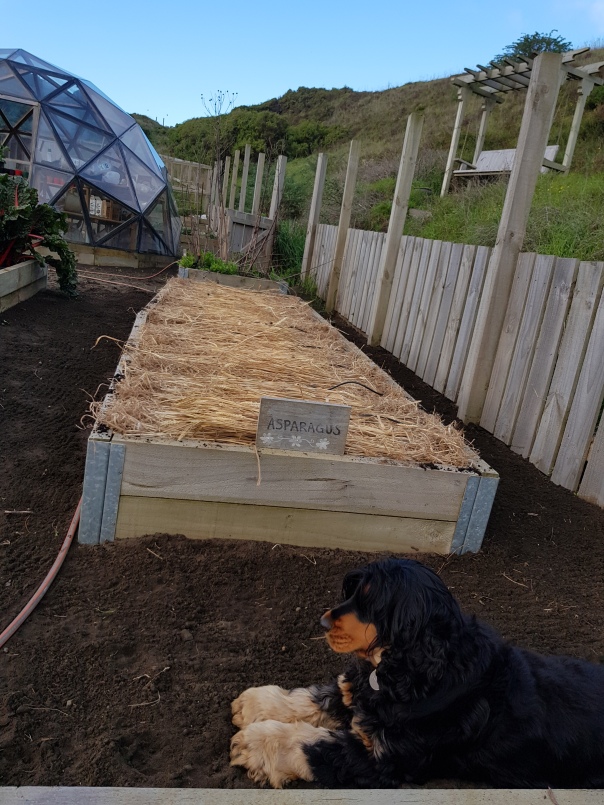 Finally the mulch layer is applied. For this I used the wheat I grew last season. Unfortunately I missed the wheat sowing window this season so I’ll have to think of something else to use next time. And now we wait.

Ok I may have become a little bit romantic as I waxed lyrical about asparagus, but this season will be the first season I can harvest each and every spear with wild abandon.   It has been a long wait and just the thought of that first spear already makes my mouth water in anticipation.

Forever more, golden asparagus fronds will be the point that marks the end of one season and the beginning of another in my garden.

This is a crop that has a long reign in the garden – up to 25 years and so it deserves to be treated with respect so it can continue to remain strong and healthy and this is why I have decided to mark this task in the winter garden to determine the moment in time when the growing season changes.

5 Comments on “When does the new season start?”