I’ve been on holiday.  It was an impromptu decision but one well worth it.  You really can’t beat quality time with family.  And my Mum is a bit of a gardener so the allure of a visit is all the more tempting.  She lives 6 hours south of us, but still on the west coast so her beach is just an extension of our beach… 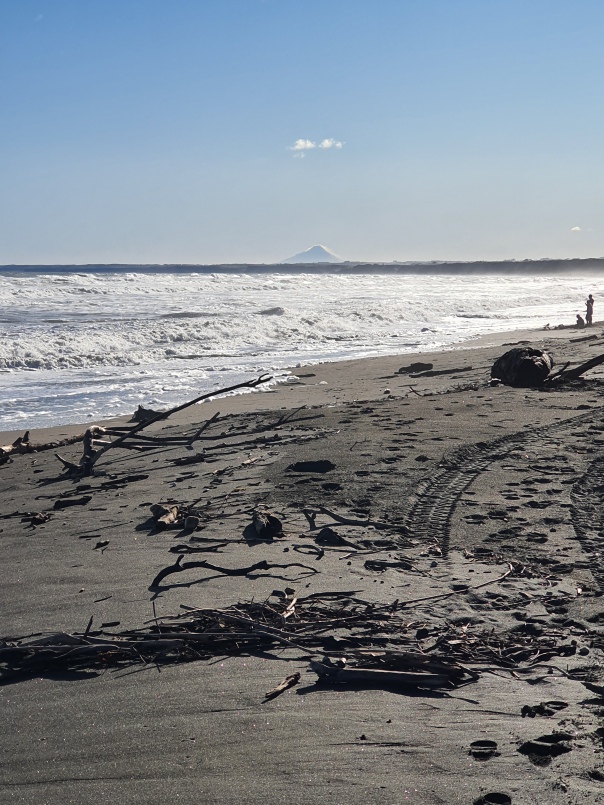 Being winter and being 6 hours south it was a lot colder than our frost free spot so it came as a delightful surprise one morning to wake up and see this white substance all over everything.   It didn’t look like frost, so the natural assumption that it was snow, considering it was snowing an hour and a half away, up the mountain.  But then there was much discussion as to whether it was snow or not as this was not an common occurrence.  Some folk suggested there was a dramatic hail storm in the middle of the night and then it rained and melted the ice and what we were seeing was a big hail slushy.  I’m going to believe it was snow because for this northern chick, snow is cool!

Mt Ruapehu is only an hour and a half away by car and they got loads of snow! 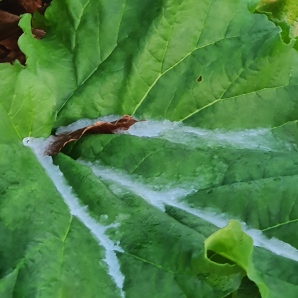 Rhubarb leaves collected a lot of ice, but doesn’t help much in the snow or not debate

I also spent some time scouring garden centres with my Mum.  She is a garden ninja…  things were going into her trolley left right and centre with wild abandon.  She assures me that she knew exactly what she was doing as she’d been planning it for ages.  But to the untrained eye it looked like wild abandon with the only considered bit was when she made me bend down and pick up the pots to examine which was the best specimen and she was rather picky.  I did a lot of bending and stretching while being dripped on by icy water as the ‘snow’ melted through the shade cloth above us.    Her garden is going to be lovely when it matures. 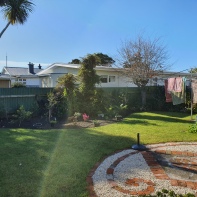 In a few years all Mum’s garden centre purchases will fill out into this space and look magnificen.

My Mum has a lovely garden, but check out the mural she painted on her wash house wall!

Then she took me down to the beach to see a regeneration project, freeing the sand dunes from interlopers that have had their day in the sun and now need to go. This will allow the native plants to be returned to where they belong after being edged out over a hundred years ago by early settlers who thought they were doing the right thing at the time.  We aren’t quite coastal as this, however it is good to see what they are doing and get some ideas for the more exposed areas of our place.

It is lovely to see the coastal regeneration being done by volunteers. 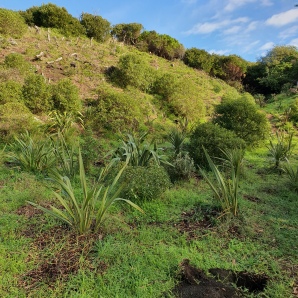 We can certainly look at some of these planting ideas for our place.

Then she took me to see another coastal spot, where there were bright and vibrant plantings that were in such a position that they could withstand high traffic areas – they were in traffic islands and on the sides of the road, and also could cope with all the wild west coast could throw at them as they were on the road to the beach, a coupla hundred metres from the crashing waves.   I was rather impressed with how healthy they all look, but on the inside my heart sank just a little.  They were mostly – actually they were all succulents and cactus.  I’m not a great fan of succulents – I never really felt the desire to acquire any at all.   And after struggling to grow so many ‘normal’ plants at my place and failing, here were these luscious and vigorous plants calling me like some kind of temptress… ‘come over to our side…’    I’m not sure I’m ready to let go of my idea of a perfect cottage garden with hints of formality, but I did go and buy an Echeveria to begin the bonding process as I reluctantly accept the idea a succulent garden wouldn’t be all bad… 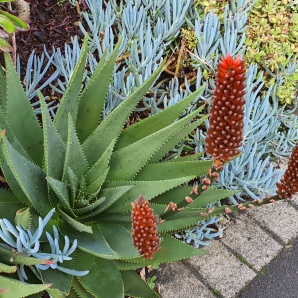 The colours and varieties really surprised me.

Everything seems so robust, given I know exactly what kind of hammering these plants would receive from the nearby ocean!

The range of colours is amazing…

Ok… maybe I need to give succulents some thought….

While embracing all things new, I decided to increase my house plant collection and found four little cuties that can find a place in my house.  I have had two house plants in my office for ages and haven’t killed them…  having said that I forgot to check them before I left.  Lucky its winter and they don’t need much water in winter.  I’ll check them first thing when I get home.  I’m looking forward to finding just the right spot for these newbies, but may need to build shelves.  But that’s ok, we’ve become good at building shelves! 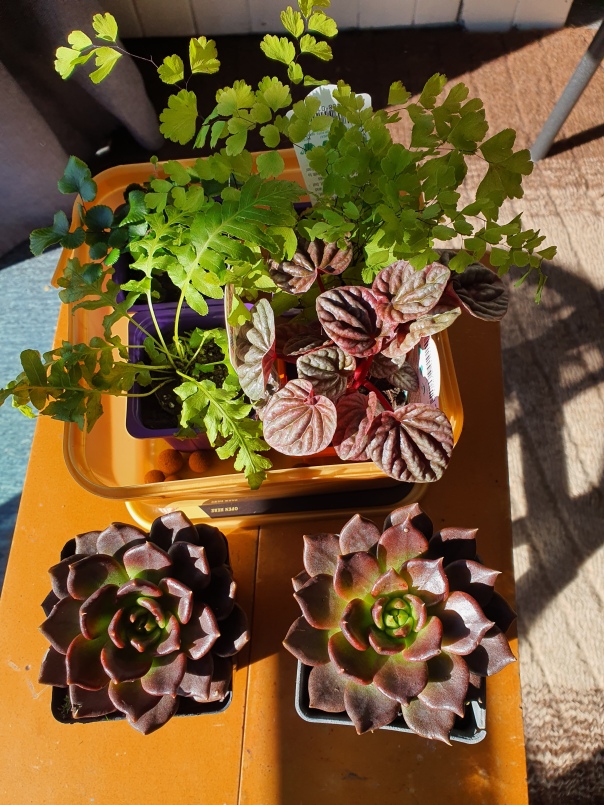 My new house buddies… I promise I won’t kill them.

Meanwhile at home, apparently there was a terrible storm with gusts of up to 110Km straight of the coast.  Our fabulous neighbour says everything is ok, but I will need to reluctantly look to make sure everything is safe from harm.

Come again soon – it will be good to get home.

NB:  Clicking on the images will make them bigger and give you a description.