Posted on September 7, 2020 by Sarah the Gardener

I do love it when you find an unexpected treasure in the garden.  I’ve been clearing out the old brassica bed to make it ready for the new season sweetcorn.  There is heaps of time before need the bed for the sweetcorn, but the brassica had done its dash.  We had eaten as much as we could to the point that we just couldn’t keep up with the side shoots of broccoli.  Now bear in mind these were the brassica plants I planted last spring.  We sort of let the broccoli go when the autumn broccoli started producing, and now we are enjoying their side shoots. 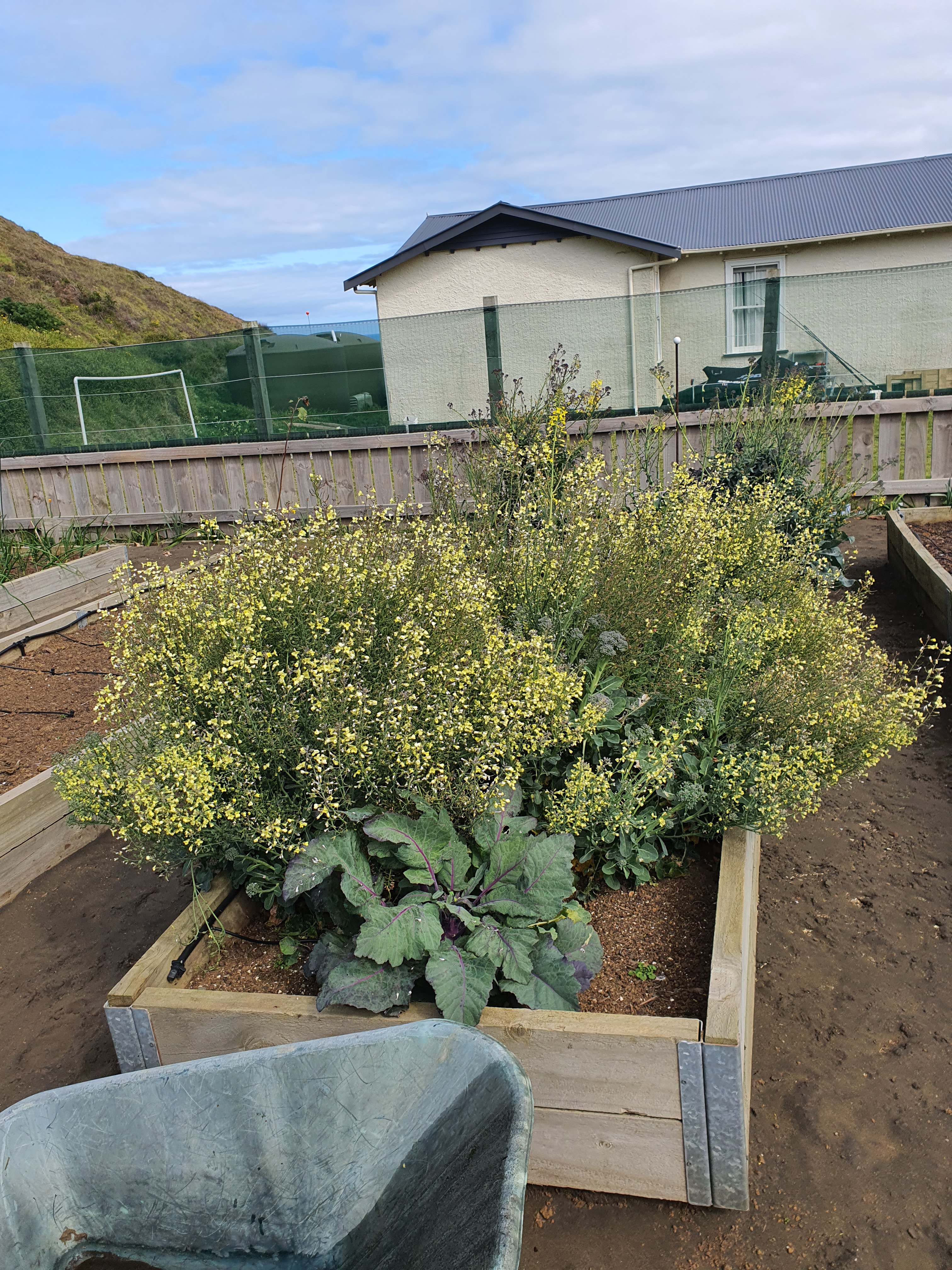 I left it long enough for the bees to enjoy the flowers, but the time has come to pull it all out before it sets seeds and creates weeds.

Now I have to confess, while it is a good thing to just lop off the head of broccoli for the immediate gratification of fast growing side shoots, for most of the other brassica it is better to have the whole plant out and start again.  But I’d been lazy and in the midst of it all I’d taken to the red cabbage with a sharp knife and left the base in ground, meaning to whip it out at some point.   That some point never happened.

I do love the beautiful patterns found when a cabbage is cut in half.

So, while I was clearing the bed, I found a small but perfectly formed red cabbage.  As we had no immediate need to eat it, and not wanting for it to go to waste I brought it into the kitchen and decided to pickle it.  A quick search on the great big internet told me that I could do a quick pickle that would be ready in three days and would last a month in the fridge and was great to add to sandwiches, salads and as a zing to loads of other meal options.  So, I gave it a whirl. 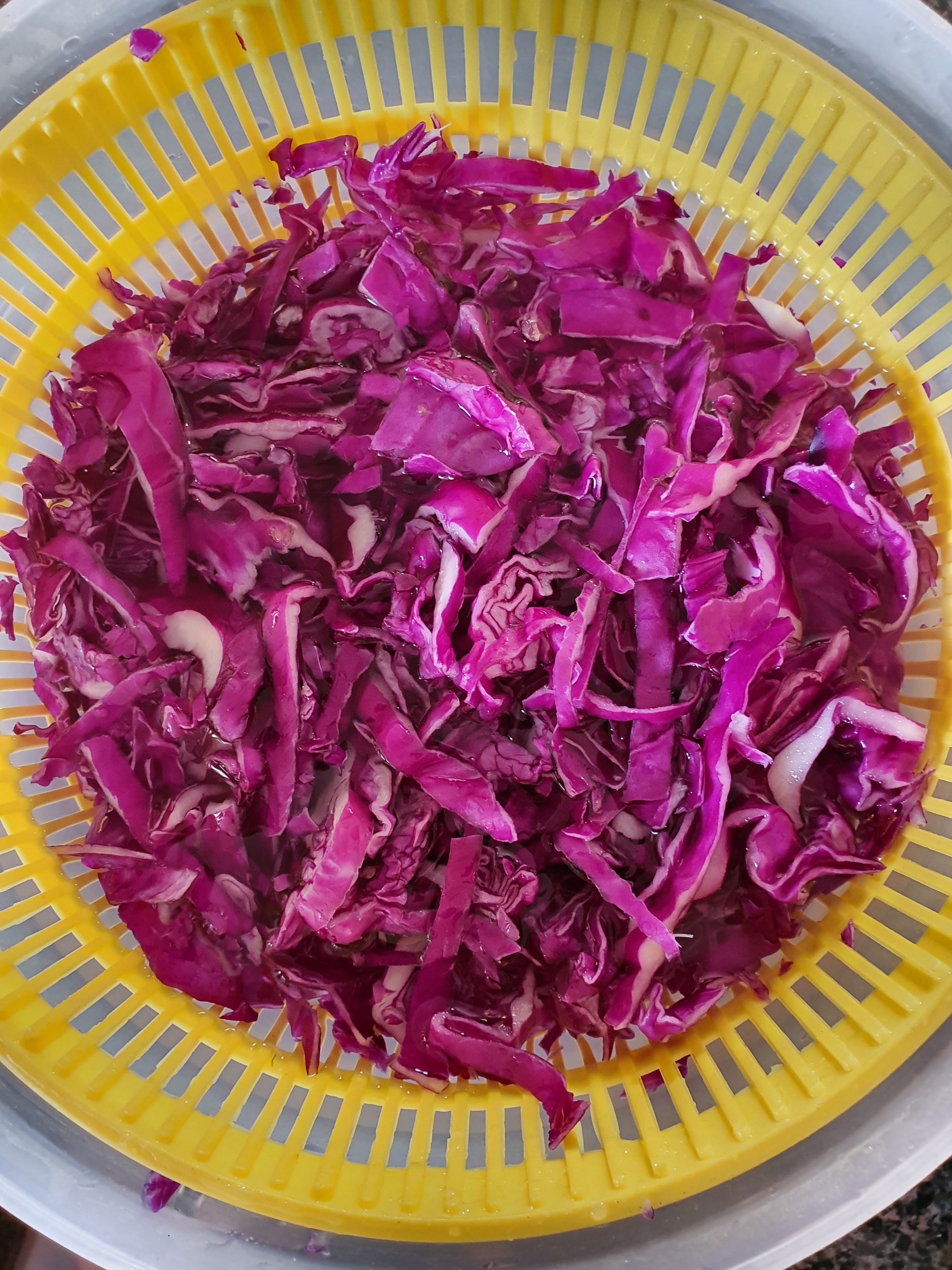 I gave the cabbage a good wash to get rid of dirt, debris and slugs!

I mashed a few recipes together because I’m not all that great at following instructions.  First I sliced it finely and soaked it in a salty brine solution for a couple of hours – this is supposed to draw out moisture but I also took advantage of the fact any lingering slugs would die and float to the surface.  There seemed to have been hundreds hiding in there when I pulled it out of the garden.  If the family only knew the starting point of this cabbage they probably wouldn’t eat it!  I’m made of tough stuff!  Not that I’d want to eat one – pickled or otherwise…  I did attempt snails at a French restaurant once but could bring myself to eat them no matter how much garlic butter they were soaked in.

Salting the cabbage was a great way to give me confidence that no survivors lingered. That way I could eat it without fear. The family would never know there was even anything to be fearful about.

Then I drained the brine and packed the cabbage into my jar and filled it with water as part of my handy dandy rinse and measure technique.  I poured off the water into a measuring jug to find out how much vinegar I’d need and then put the cabbage into my salad spinner to get rid of as much water (and dead slugs – there was only one, so I must have done a good job picking them out.) as I could.

The vinegar and spices were boiled up.

Next I put the required amount of vinegar into the pot.  Most recipes called for cider vinegar or white wine vinegar, but I only had white or malt vinegar so I went with the white.  Sometimes you have to work with what you have.  I added some caraway seeds because apparently they go well with cabbage; some mustard seeds because they always go well in a pickle, and some peppercorns, some garlic and some chilli for a bit of zing if the vinegar wasn’t zingy enough.  I also added a bit of salt and sugar to taste – to take the edge off the harshness of the white vinegar.  These were all put in a pot and boiled for 10 minutes. The cabbage, spices and vinegar meet in the jar. I gave it a bit of a stir to distribute the spices and remove any air bubbles and made sure everything was submerged.

While it was boiling away I cleaned my jar and lid and soaked them in boiled water to sanitize them.  The white vinegar is quite strong, but that doesn’t mean you should take chances and not use good hygiene practices.

It didn’t take long for the vinegar to take on the pink colour and it has only intensified since then.

With my jar clean, I packed it out with the dry cabbage and then poured over the boiled vinegar and spices.  The amount was perfect, no left-over vinegar at all!   Then I secured the lid and now we wait.  I have such high hopes this will be delish as it is such a pretty pink colour and anything that pretty would surely taste fantastic.  I guess I’ll know on Wednesday.

Come again soon – things are sprouting in the greenhouse.

← The Berry End of the Garden
An Arch to be Rivalled →