While I have proven I am excellent at procrastination, I have confirmed without a doubt I have mastered a new skill – under estimating things.  I think I always knew it because there have been a multitude of projects where I completely believe I’ll have it whipped up in an arvo, only to find it takes 3 days and the help of Hubby the Un-Gardener or for serious projects the help of a professional!

The gladioli are starting to flower – this one is my favorite, I love the colour.

The latest bout of under estimating is the planting out the garden.  Firstly, I thought I’d be able to do it in a long weekend, but most of the weekend was spent doing normal weekend things.  Then I was convinced I’d be able to finish it on the long weekend Monday.  It came as a bit of a shock to me when I didn’t get it done on the Monday.   Taking a more realistic approach I have set myself the goal of Friday.

The yams are off to a solid start, hopefully this season I’ll see some kind of harvest!

But even this isn’t realistic.  With the long weekend comes a short week and all the computer gardening required to be done is squished into a shorter period of time.  So, I’ve spent longer in the office than I would have normally, which eats into my gardening time.    But time isn’t the only factor to consider…

I have a very large garden.  There are 35 beds in total.  But to be fair the onion, onion overflow and garlic, pea and potato beds are chugging away doing their thing.  The four berry beds are also under control and up and away.  I’ve even had a few strawberries, but I’m reluctant to share a photo of them on social media as the kids follow my stuff and will notice and then I’ll have to share the meagre haul in real life! 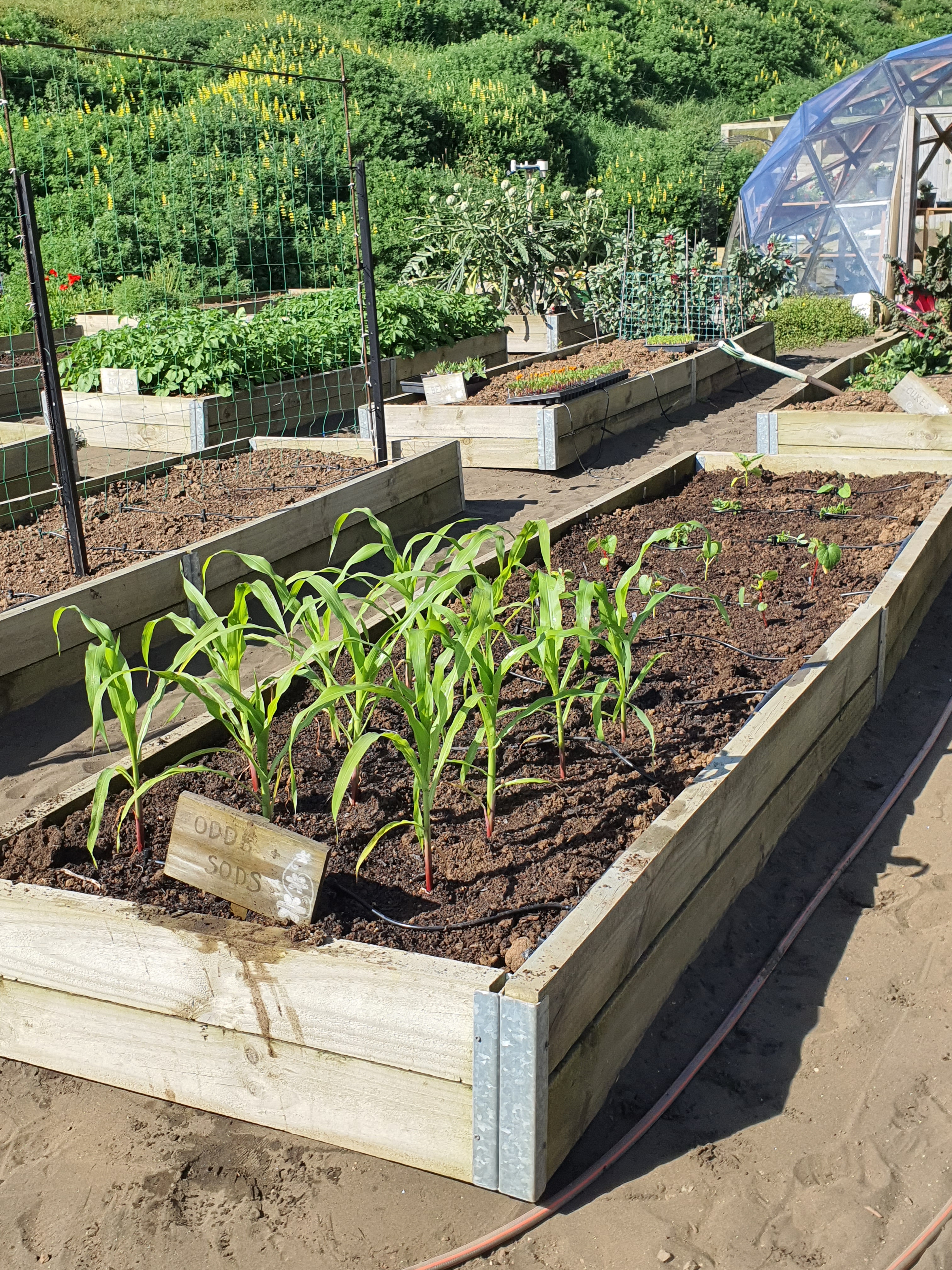 The odds and sods bed is done, with popcorn, okra, peanuts and eggplant seedlings sown and a row of soybeans.

I started my flower seeds late and so I don’t need to worry about the flower beds just yet, so that is four beds that don’t need any love just yet.  The asparagus, perennial herbs, yams, and both the artichokes – globe and Jerusalem and rhubarb are under control.

So that leaves 16 beds that actually need the new season planting.  So far I have planted out the tomatoes, 4 of the 5 squash in the squash bed, the annual herbs, the melons, odds and sods, and salad crops.  The root crops are in the carrot and root crop bed and the sweetcorn seeds have been sown.

The sweetcorn seeds have been sown – two in each hole and ten spares along the side… just in case.

If my maths is right there are eight beds still to do.   I still have to whip up two structures on the cuke bed for the cucumbers and the gherkins.  But I have a supply issue with the warratahs and going to find some would mean being away from the garden for at least half an hour and at most an hour and a half if I have to go further afield. But before I can do that, it had a load of silverbeet that was about to go to seed and needed harvesting and processing.  I’ve harvested it but I still need to process it.  Then give the soil love, then build the frame and then do the planting.

The beans just need sowing, and one lot of pumpkins need planting.  The beds are ready and waiting.  The other pumpkin bed still needs a full love experience before anything can be planted.

The annual herbs have been planted up – coriander, dill, stevia, several varieties of basil and an attempt at cumin.

The autumn brassica are pretty much done, and I’ve hauled them all out.  The cabbages will need to be processed in some way shape or form so I can keep them longer than a week.  I have fallen in love with pickled red cabbage which is easy to do and gives a zing to salads and sandwiches!  But the bed will need a tickle before the summer ones go in.

The over winter peppers are bouncing back to life and the gaps have seedlings at the ready, but I need to give the soil some love so they have access to some new nutrients to replace what they have already used.  It requires a bit of heavy lifting with compost, so I’ve been putting it off.  And the old salad crops have only just come out of the zucchini bed, so the soil needs a full love to refresh the soil before the zucchini go in.  Only one of the four plants are ready, so I have a no hurry approach.

The good leaves from the silverbeet has been harvested and now I just need to wash it, chop it up and put it in meal sized portions in my vac pack and then freeze it. Then I can clear the bed, love the soil and build the frames and then plant the cucumbers… not much to do.

The leafy green bed has bolted fennel in it but I have plans for it so I can’t take it out until I’m ready and then there are a load of carrots and parsnips that need to be eaten but they’re not quite ready yet so I’m not sure what to do there.

I can’t see myself being finished by Friday!

Come again soon – I may be some time….

← Half In Half Out
In the midst of the busyness →