Posted on October 8, 2021 by Sarah the Gardener

It has been a turbulent week, but not in the way I was expecting.  Going by the weather forecast I was set to be indoors or in my raincoat all week.  But they got it very wrong.  It did rain, but most of it was at night or when I was too knackered to garden anyway so it has been fine by me.

The wild life pond needs a bit of a dredge…

Most of the week was spent pushing The Palace garden to completion and I’m pleased so say after more than 8 months is done – all bar 2 bags of mulch.  Hopefully it is only 2 bags of mulch I’ll need as that is all I can get through click and collect.  When I realised I didn’t have enough I jumped online and popped several bags of mulch in my cart and the next day when I went to organise it properly I could only get 2 bags in my cart so I snapped them up before they disappeared too. 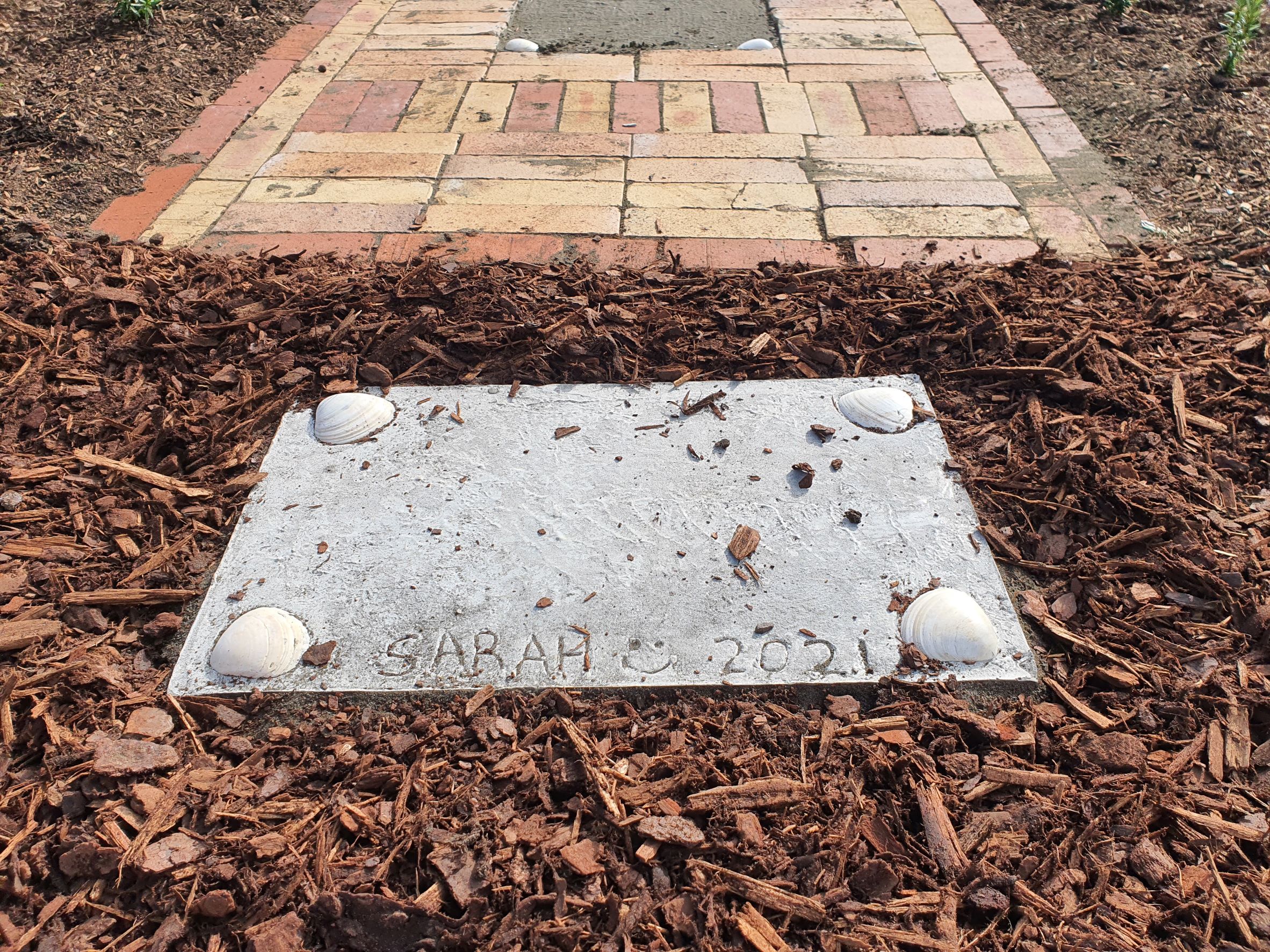 The final piece in The Palace garden was my autographed paving stone.

As I was gazing upon what I had created I realised I’d missed an opportunity.  I was in such a hurry to get the holes in the brick path filled with homemade cement pavers I didn’t even think to write my name and the date in the setting cement.  To be honest it isn’t often I create something that looks exactly like how I intended it, without niggly areas of imperfection that jump out at me and bother the heck out of me.  After such a long period of sustained effort to have something I’m so pleased with has come as a bit of a shock.  I couldn’t let the achievement go unmarked so I decided to quickly whip up another paver and etched in my name and the date.

I was amazed to see the lead picture of my article in the October issue of the Kiwi Gardener Magazine to be a full page image of the rock. I will save the grand reveal of the garden for the December issue of the magazine, but when it comes out I’ll post some images of of the garden having had a couple of months to settle in.

It was important to get this garden finished this week as its progress has been featured in Kiwi Gardener Magazine and this was the final instalment with a deadline.  So my heart sank with all the rain we were supposed to receive.   But now I am overjoyed it is done, and I can use the garden for its considered purpose – quietly sitting and counting my blessings.

The spuds need mounding up.

It also means I can throw all my attention back into the vegie garden and for once and for all bring it up to date with its spring readiness.  Most of the beds are good to go, and the seedlings have been repotted for the last time in their final sized pots.  But there are little jobs all over the place like changing the side of the beds the pumpkin irrigation is on and connect it all up with the berry beds so I can water 6 beds at a time with my irrigation system.

It would seem I have a problem in the greenhouse. I did a thorough search and evicted 4 slugs and a snail. I hope I found everyone.

Sector 4 is still in desperate need of a general weed and tidy up.  The raspberry runners are all set for world domination.  The pond is choking and needs clearing out and everything needs a general tidy up as it is getting messy in the corners.   I have employed one of the Teen Lads to help get me to be where I want to be and it has been nice to delegate the more laborious tasks while I do fun things.

The last of the small seedlings are crying out to be transplanting into larger pots.

I also need to make a decision to trust the weather or not with my seedlings.  We are frost free, but it can still get nasty here.  Do I go a week or two early knowing things won’t get frozen or wait until the more stable weather arrives in the second half of spring?  The generally recommended safe planting out date is Labour Weekend in the last week of October.  I’m erring towards playing it safe.  It isn’t like my growing season is short and I have to make the most of things – we get long hot summers.  Having said that – If I go early I can get a jump on the pest and disease pressure…  Worrying about this decision will make a change from lying awake at night worrying if I’ll get The Palace finished in time.

Come again soon – for all things vegetable growing for the next wee while.

←  A new Month
Getting Stuff Done →