Sometimes nature forces your hand and encourages you to get things done.  The garlic I grow is a variety called Early Pearl.  A generous friend sent me some to try many years ago and I had the best success with them.  So, I saved them for the following year and have done so ever since.     The great thing about this garlic is it gets going early enough so by the time the rust inevitably hits, the plants are strong enough to shake it off and continue to grow bulbs that are harvestable with cloves big enough to go to the fiddly bother of peeling and cooking with.  I still hold out hope one day for a rust free harvest with big fat bulbs.

My trusty garlic legacy box… It sits on a shelf in my office for six months holding the best dozen bulbs from the crop. The pungent aroma of freshly harvested soon settles down – either that or I just get used to it.

But the thing with this garlic is it is an early variety and needs to be started in March or April.  I have never managed a March start as it just instinctively feels too early for garlic considering the general planting time is the shortest day in midwinter.   And in March there isn’t anywhere for it to go.  All the beds in that sector are still producing or, its potential neighbour needs an early start and to have garlic in its new spot in the crop rotation cycle messes up my orderly flow. 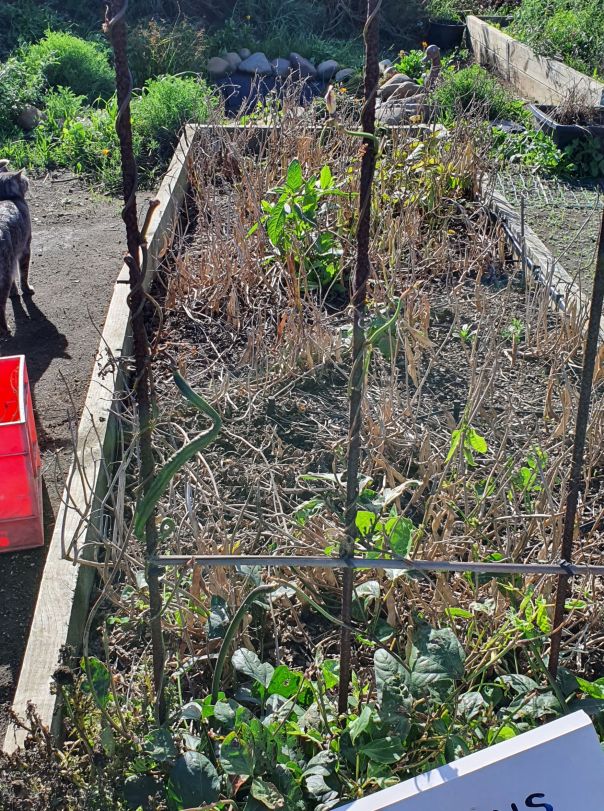 The bean bed always looks scruffy towards the end of the season, but it is best to let the beans fully mature by drying on the plant.

However, this season I have settled for it to go between the beans and potatoes.  The beans need a nice warm soil of at least 18°C which isn’t until late October – not that the start date really matters for them as they come after the cucumbers, which will have their beds overwintered with a cover crop and be enriched and replenished in plenty of time for bean planting.   But it is the other end of the season where the beans are compatible with the garlic, as by April all of the dried beans have dried on the plants and I need the motivation to get them harvested before the rains ruin them or the rats find them, and so by adding a sense of urgency to get the garlic in, means the beans get harvested in good time and possibly even jump the queue to get to the top of the list. 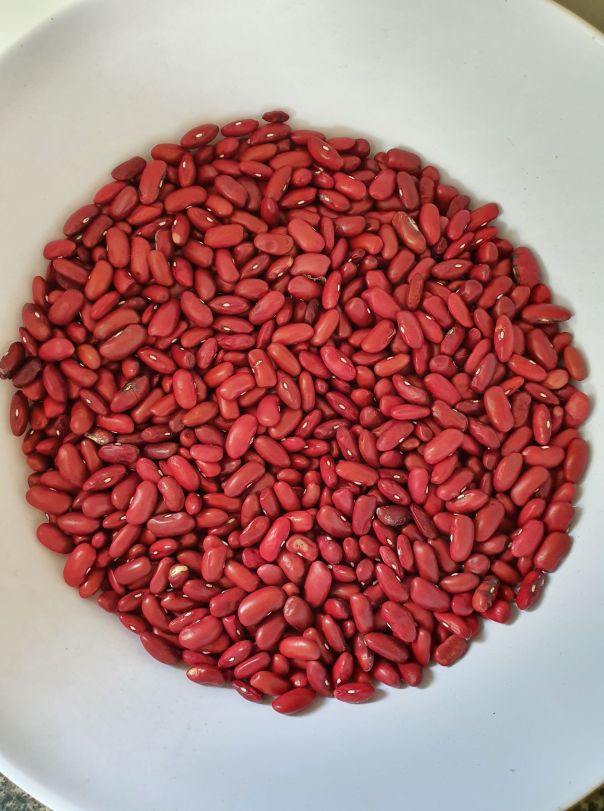 I am very pleased with this seasons haul of kidney beans. To make them more convenient in the kitchen I will soak the whole lot over night and then divide them into meal sized portions and freeze them. Then when we need them I just need to boil them up for 20 mins and add them to the meal. I’m not organised enough to leave them as dried beans on in the pantry – we’d never use them!

It doesn’t do any harm to have a soil that has the cleansing qualities of garlic be the new home to the potatoes in the following year.   And once the garlic is harvested in November – because it is an early variety, there is plenty of time for a crop of corn to keep the bed productive and even enough time to pop in a cover crop to replace what the corn used up. 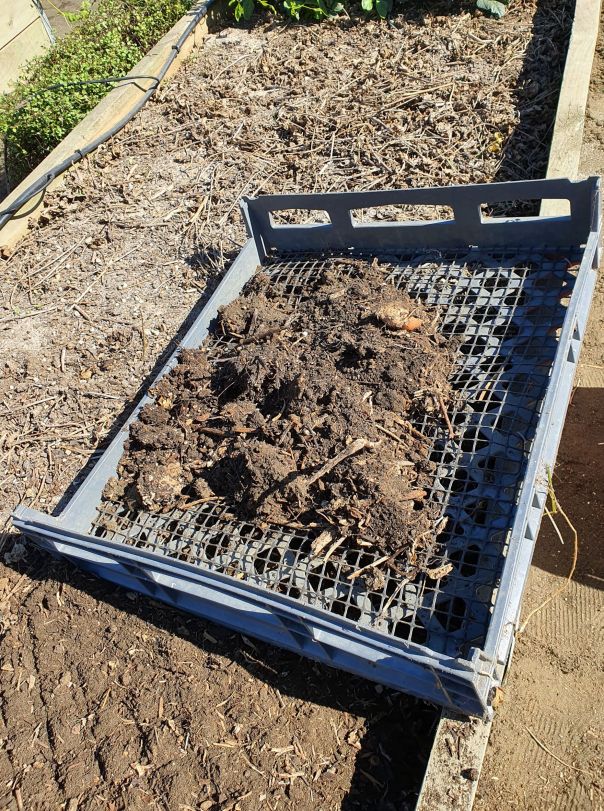 Having the bed close to the compost makes adding it so much easier. My mesh lined crate makes short work of removing the lumps, bumps and the as yet un-composted from the good stuff.

So, this week, in among all my other urgent projects, I found the time to harvest the beans, clear the bed of weeds that were beginning to show their faces since the last bout of rain, and top it up with a sprinkling of blood and bone and a good layer of home made compost, sifted directly onto the bed.  It was the easiest way as this bed is right beside the compost pile.   Then, in spite of the recent rain, the garden was quite dry, so I gave the whole thing a good soaking. 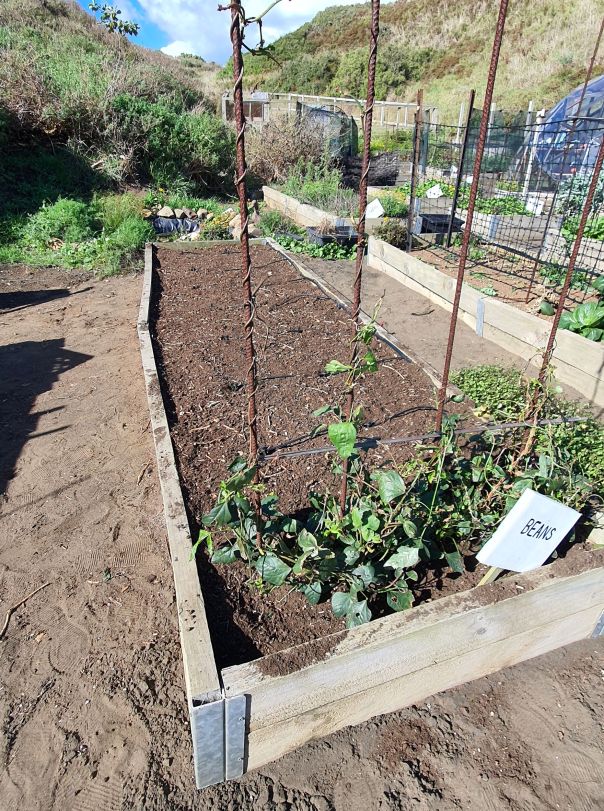 There is nothing nicer to behold than a freshly prepared garden bed waiting for a crop – aside from the lingering snake beans.

Then I heard about the impending storm and how it was supposed to be high winds and terrible rain so I thought I would leave planting the garlic until after the storm in case they got too wet and rotted before they started.  But as soon as it was clear that it would miss us, I decided to plant it anyway and take my chances. 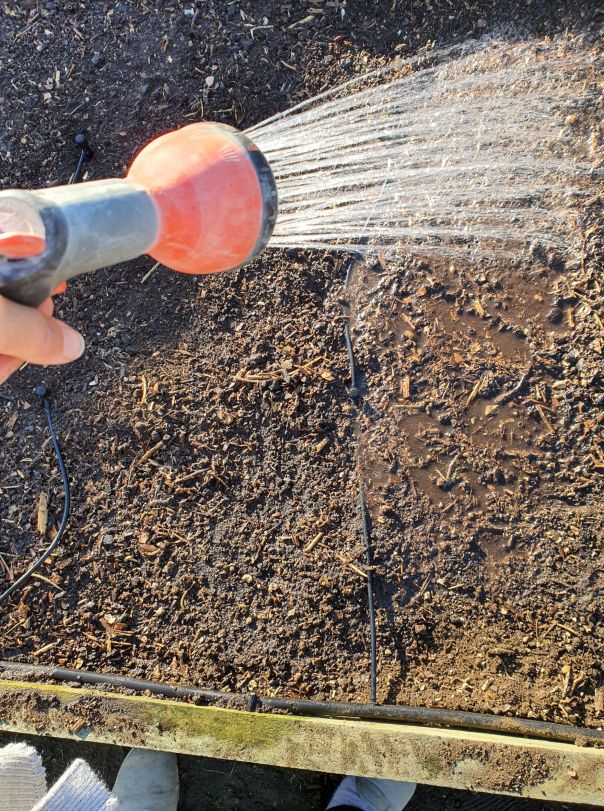 The bed was given several deep waterings – and a smattering of rain before being planted out.

So, I popped in 16 rows, 25 cm apart and with 6 in each row 20 cm apart.   They can be planted closer together but when dealing with fungal diseases you want as much air flow as possible around the plants.  Although garlic has such long strappy leaves, they invariably rub their orange rust infested tips against each other eventually, requiring haircuts to reduce the spread.

I sorted through my dozen saved bulbs of garlic looking for the best and fattest cloves and set them aside ready for planting – 96 in total – that should last us.

Two of the rows have been planted in pots to be transplanted later, because the snake beans are still flourishing, and I didn’t have the heart to pull them out.  So, once they are done, the container garlic will be slipped into their final spot. 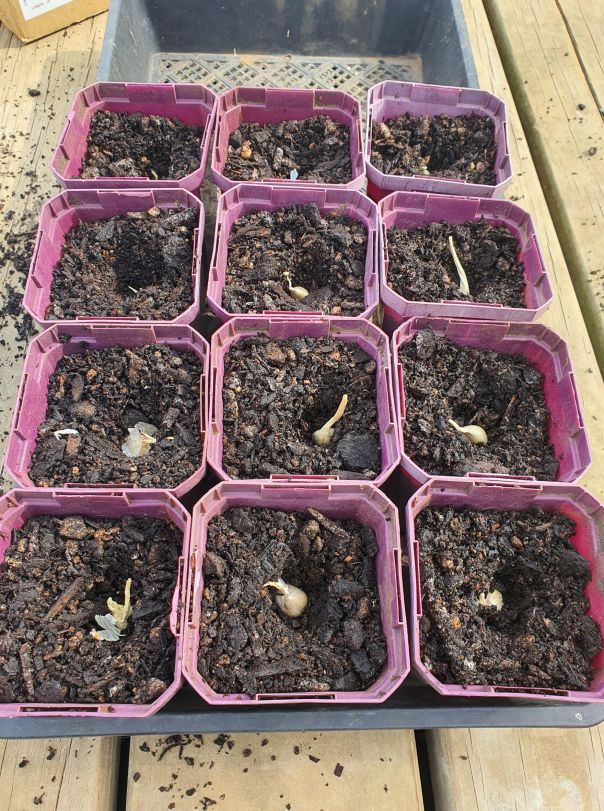 These cloves will have to wait until the snake beans have finished before going into the last two rows.

It feels good to be making solid progress to restoring order to the garden, but also strangely weird to have the first crop of the new growing season underway – especially when there are still tomatoes in the garden from the last growing season.

Come again soon – progress may be slow right now, but we’ll get there in the end.

← Fraught with Frustration
A Time Capsule →