Today is a rain day

I think I’m pleased.  It has been so dry for so long and we’ve been worrying about how much water is left in the tanks for such a long time.  Finally, there is respite and enough water that I may even indulge in a candle lit bubble bath with a good book at some point soon – maybe after a hard day digging something.  Such a rare luxury. 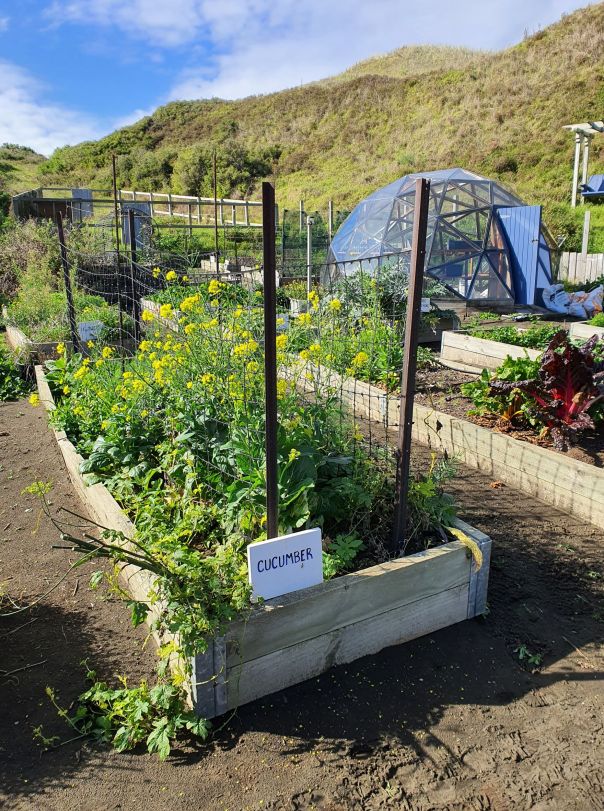 The old cucumber bed looks so lush, but none of it is what should be in there…

But for today it is just too soggy.  At one point there was what appeared to be a braided river running through the garden.  I always thought it was the wildlife pond overflowing, but it was coming from all over the garden and the penny dropped…  the garden is the lowest point of a big valley – of course there will be water flowing during heaving rain.  Duh. 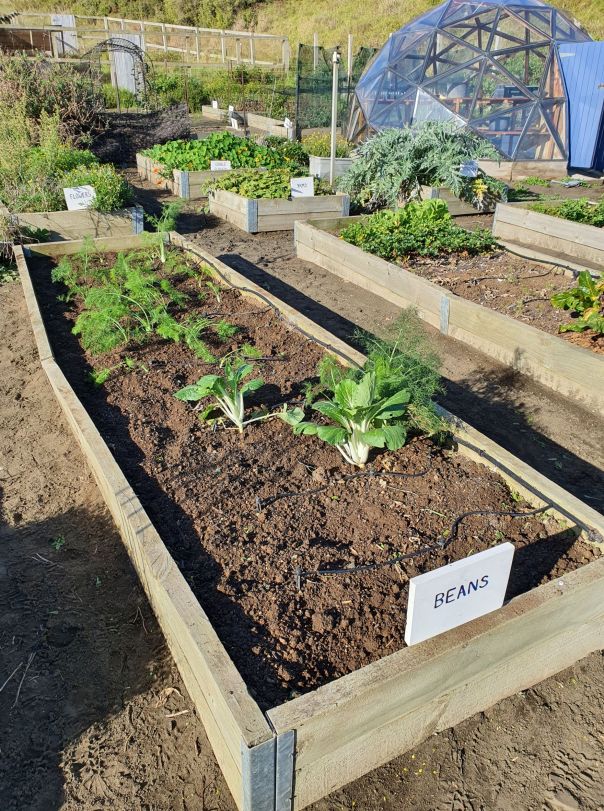 Almost everything got kicked out of the bed and mustard cover crop sown, but I’m looking forward to a great fennel harvest soon.

The good thing is the ground is a free draining sand and it all drains away quickly, moistening the depths of the soil as it does.  In my old garden on the swamp a rain like this would take a week to ten days to drain away and if it rained again in the meantime, then it would perpetually be soggy.  Which was such a pain for preparing the garden in spring!  As much as the winds straight off the ocean can be brutal, I think I prefer this garden to the old one.

The good thing about this weather delayed gardening week, is a lot has happened since we last spoke, so I see today as a welcome break rather than a major inconvenience to progress. 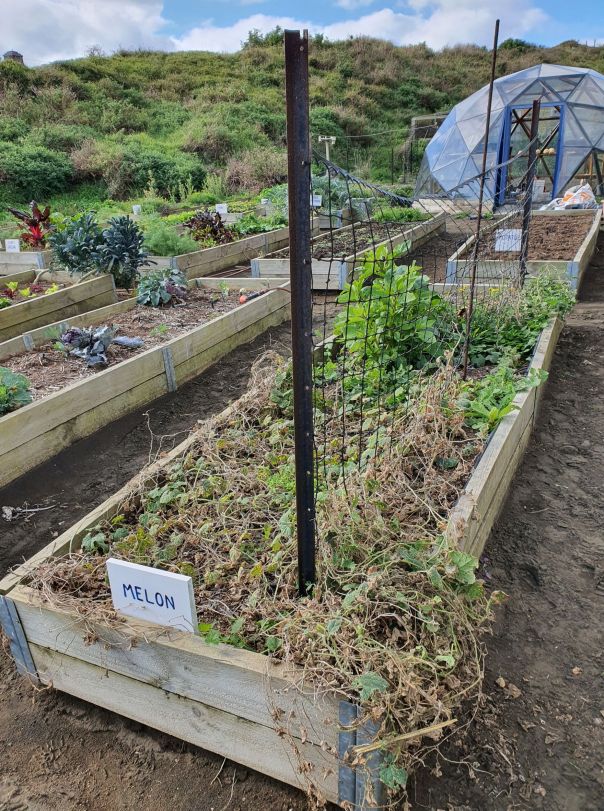 The old melon vines looked so scruffy, and the kiwano were just holding things up. 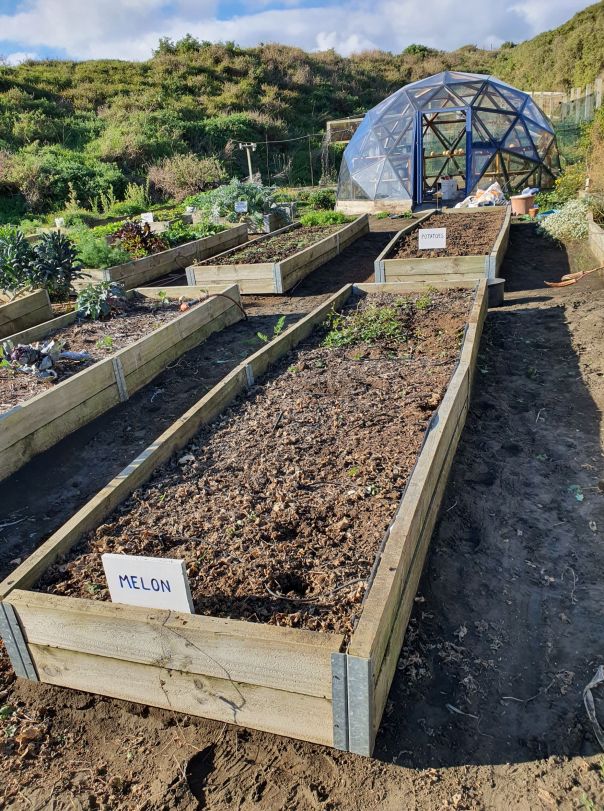 That looks so much better – aside from the peanuts. Once they’re done I’ll give the soil some love.

Driven by the need to create progress before my Handy Helper comes back, I decided to clear out the old cucumber bed so the mustard cover crop could be sown in good time before the weather turned cold.  I found I couldn’t make myself clear it out completely as there were many half mature fennel plants in there and some Bok Choy.  I decided to leave them and let them mature and harvest them – waste not want not and all that, and just scattered the mustard seed around them. 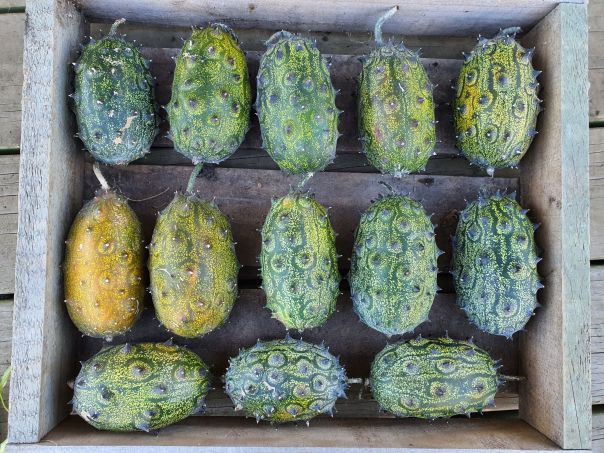 Then I decided the kiwano had had long enough and were just making the place look scruffy.  I did a quick search on the great big internet to learn that they ripened off the vine and quickly set about clearing up their mess.  The spikey kiwano are now ripening in the safety and warmth of the greenhouse.  But alas no cover crop has been sown in their spot as there are self-seeded peanuts missed from last season and if they have been growing there all that time.  It would be wrong to pull them out just weeks before they are done. 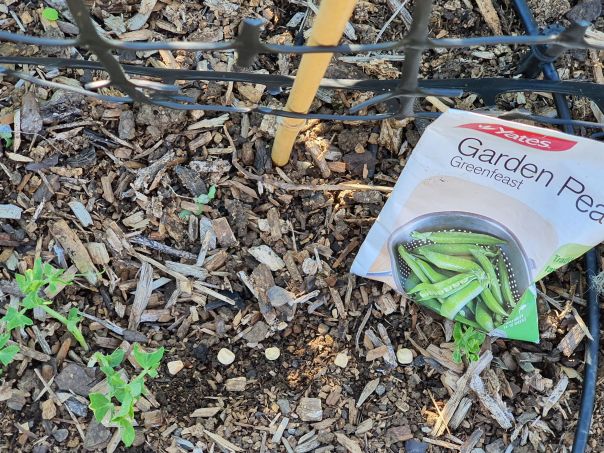 While I was in the swing of things, I popped some extra pea seeds in the row to fill a few gaps.

The clearing continued when my Handy Helper arrived, and we cleared everything out of the flower bed beside the pond… most of it was weeds or prolific self sowers.  I want to find a moment this winter to design a flower border type garden there with beautiful low maintenance perennials that look lovely but won’t spread themselves about the garden.  I’m looking forward to this, but in the meantime the bed is empty, and I’ll just keep hoeing it often, so it stays empty until I’m ready to do something with it. 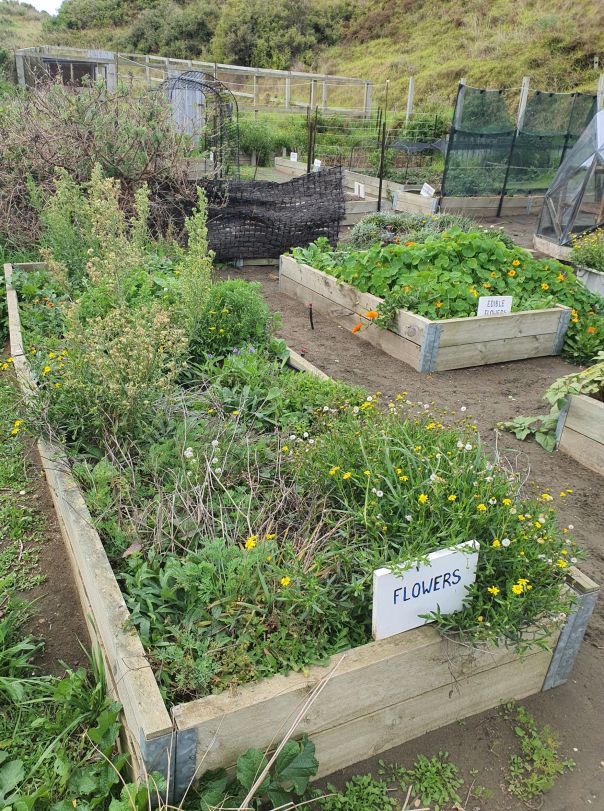 There was really nothing to be done with this garden except clear it out! 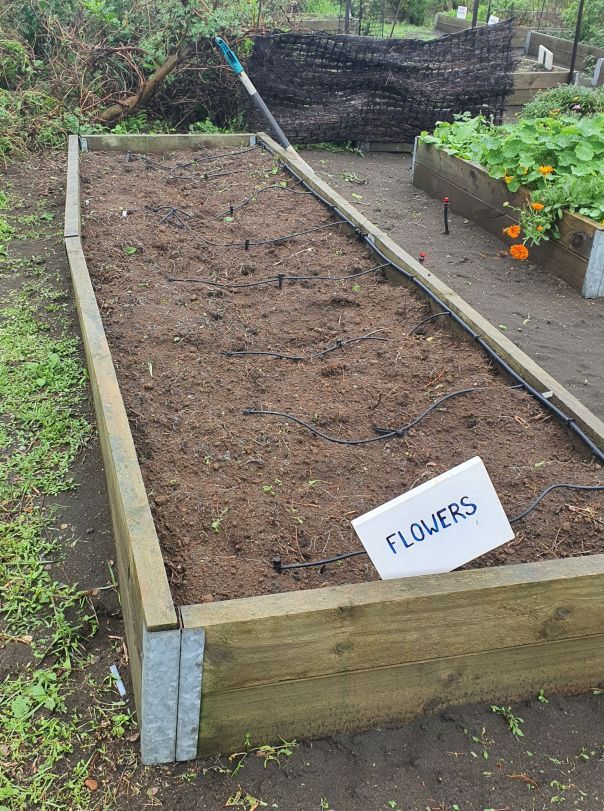 In my head I can see a beautiful garden here, but I need to find the time to extract it and then turn it into a reality.

And then we pulled down the tomatoes – frames and all.  On close inspection, there were problems – there seemed to be a stem rot in some of the plants – probably my old friend Pith Necrosis, but I understand him a little better and am making improvements to avoid his presence.  And there were some Tomato Potato Psyllid.  Not many but enough to cause a problem, but that was it.  There weren’t any fungal diseases which was great.  So, I think I need to keep doing what I’ve been doing and tweak a few things and my tomatoes will crop abundantly for me.  These beds took out all of the tall structures in the garden so not only does it look tidier, but the landscape has dramatically changed. 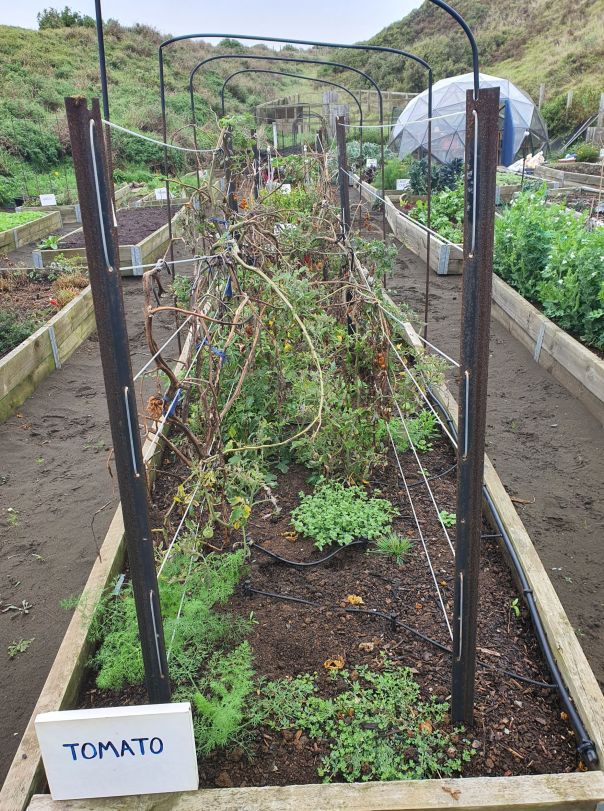 I was tempted to see how long the last of the tomatoes would limp along, but I need to prepare the bed for the onions. 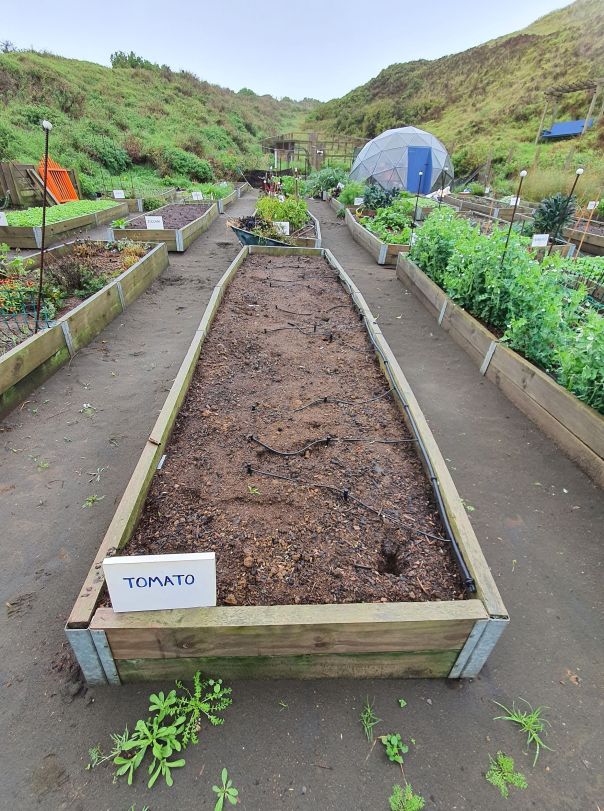 I just need to give the soil some love in readiness for the onions which should be planted here in late June. 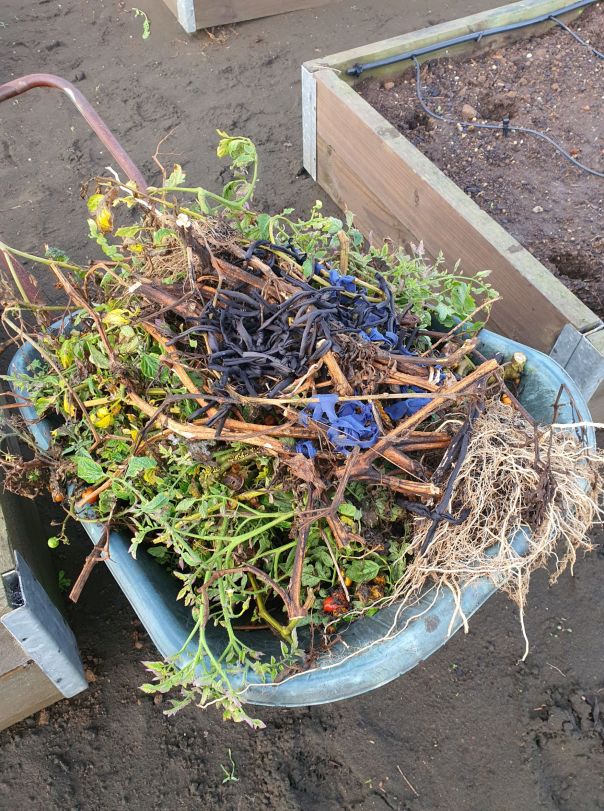 I’m going to burn the tomato residue because I don’t trust it not to overwinter something terrible.

I have also been working hard on Room Two of The Palace Garden.  It is now pretty much a clean slate with just the occasional wayward straggler of Kikuyu popping its head up, so by the time the plants go in the ground should be completely weed free.  I’m also working on a staircase – of my own design that will take me up to the sundial time capsule.  I’m not 100% confident it will work at this point but an 100% enthusiastic for it to work so who knows.  But it did mean using my favourite power tool – my drop saw.  It certainly makes short work of chopping.  I can’t believe I used to stubbornly cut all my wood by hand.

Come again soon – I’m loving this pace of progress in the garden and look forward to next week.