Knowing when to stop trying 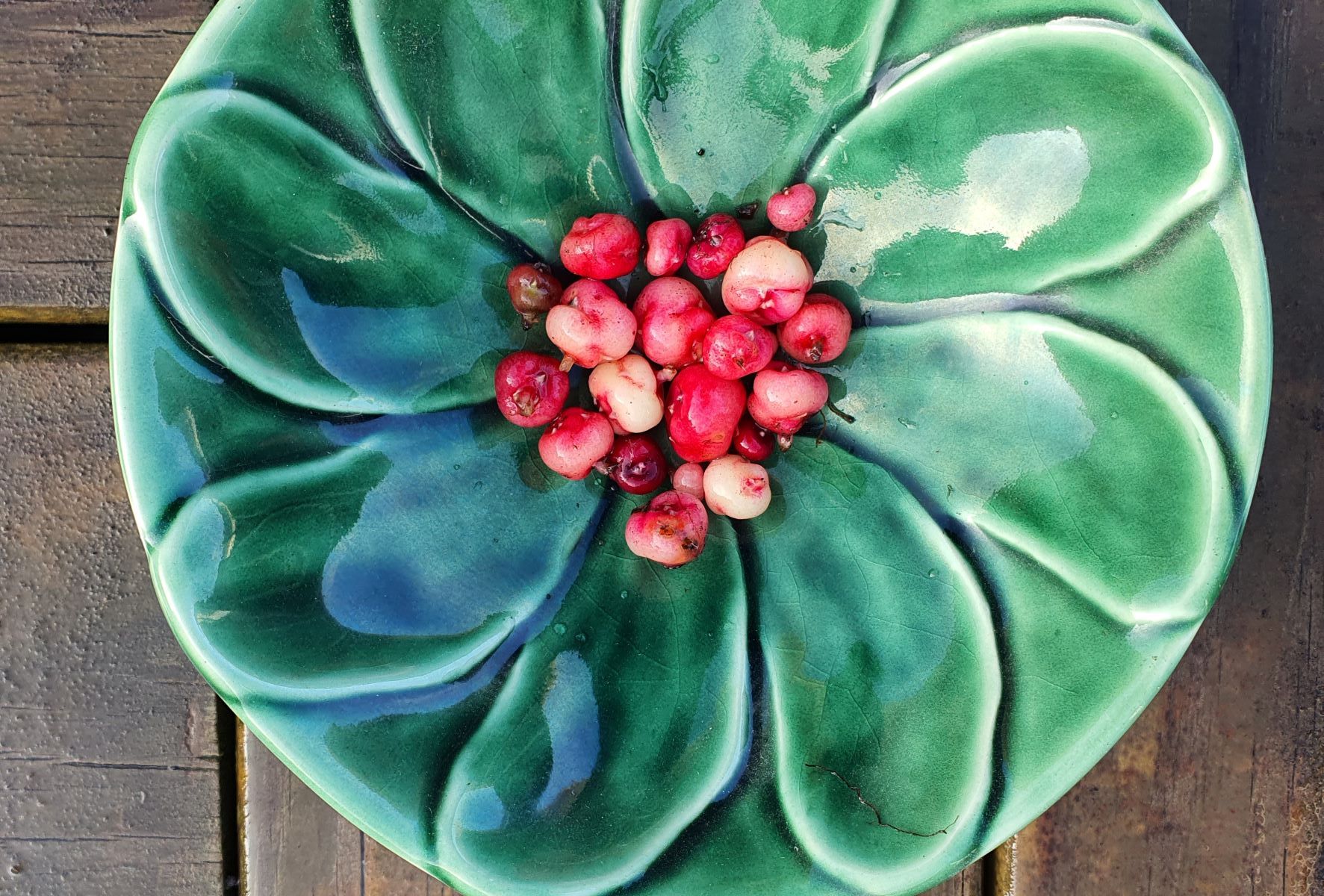 Over the last few days, I’ve done a significant amount of harvesting, which is surprising considering we are at the end of the first week of winter.   The first session was more a case of storm damage.  The peas had been completely bashed to bits, but they were attempting to rally, and I noticed some fat pods that needed picking.  I was surprised how much I was able to harvest, and a good meal sized portion was podded and put into the freezer for another day. 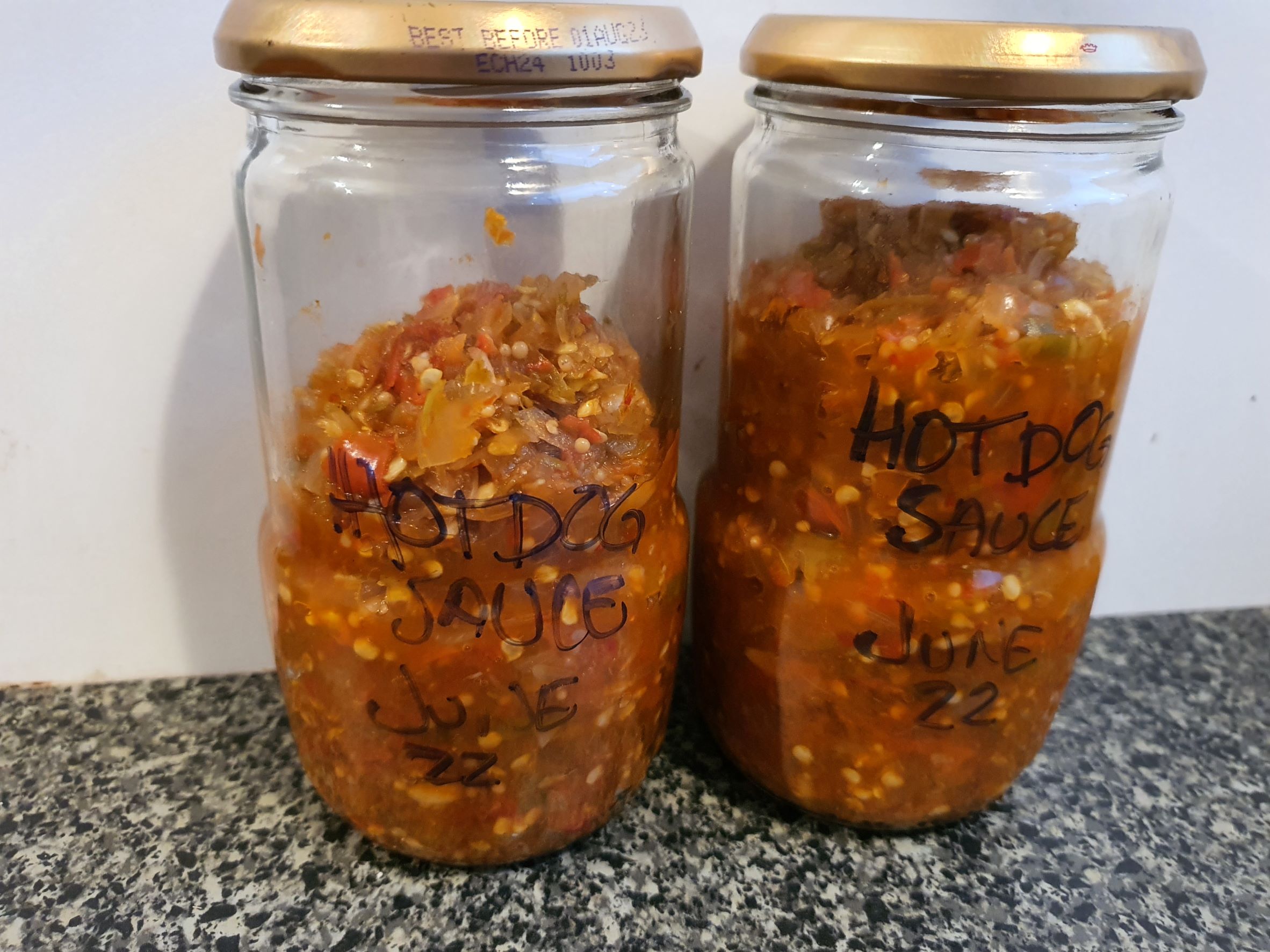 My hot hotdog sauce. I need to add a warning to say use sparingly.

The storm had also whipped all the leaves off the peppers.  Earlier in the week they were looking great and I was hoping they would go on for ages.  I can overwinter them easily enough, but with the lack of frost here,  I can also easily overwinter pests.  The year I did try to keep them going, their second year was fraught with pests and problems, and I decided it wasn’t worth it and start fresh from seed each season. 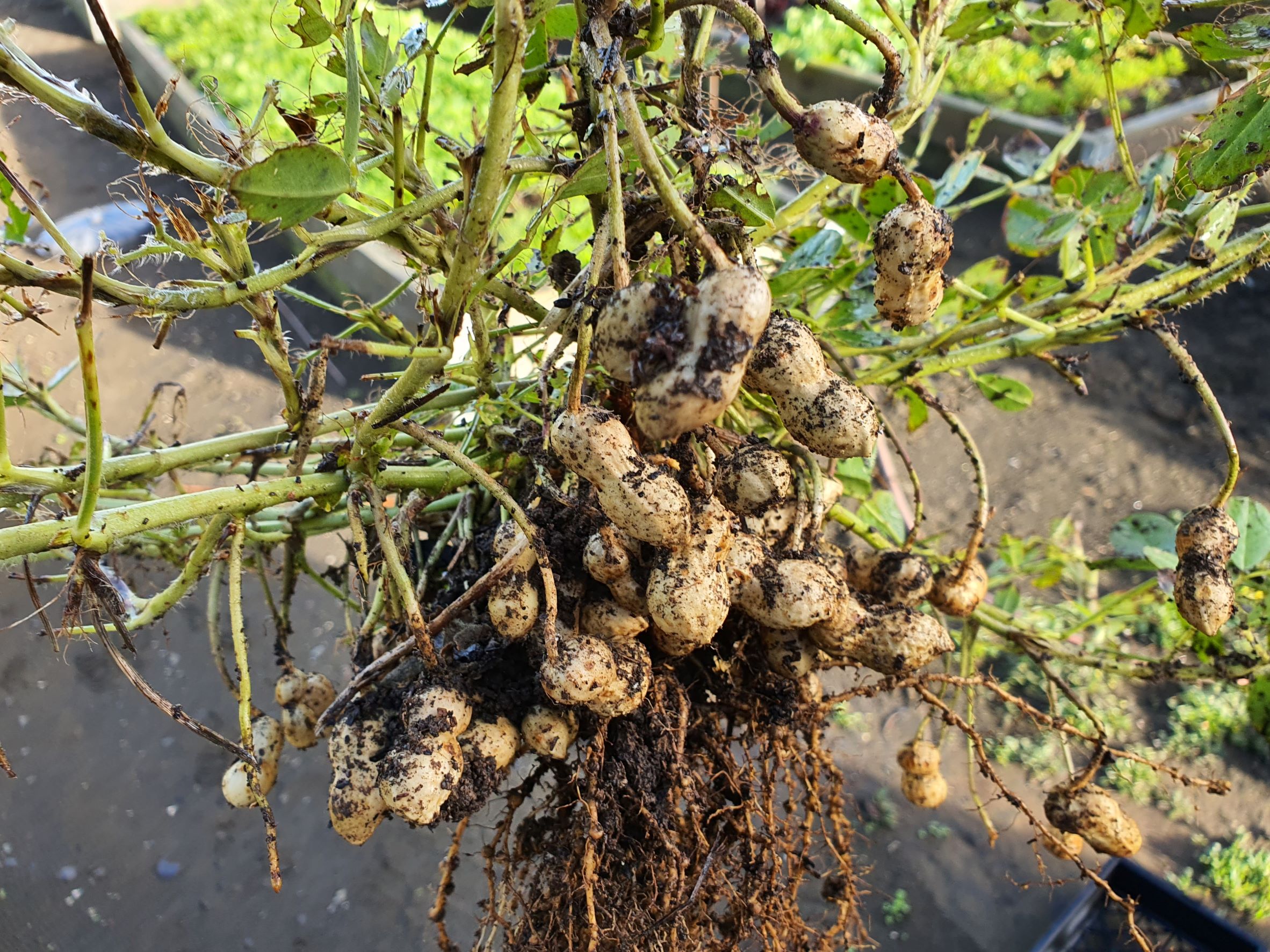 Not a bad haul of peanuts!

I pulled all the remaining peppers and chillies off all of the plants.  The bigger peppers were cut into large chunks and frozen for using in cooking throughout the winter and the smaller ones and chillies were turned into a hot Hotdog sauce.  I suspect the jar and a half I made will last quite some time as it is a little on the spicy side. 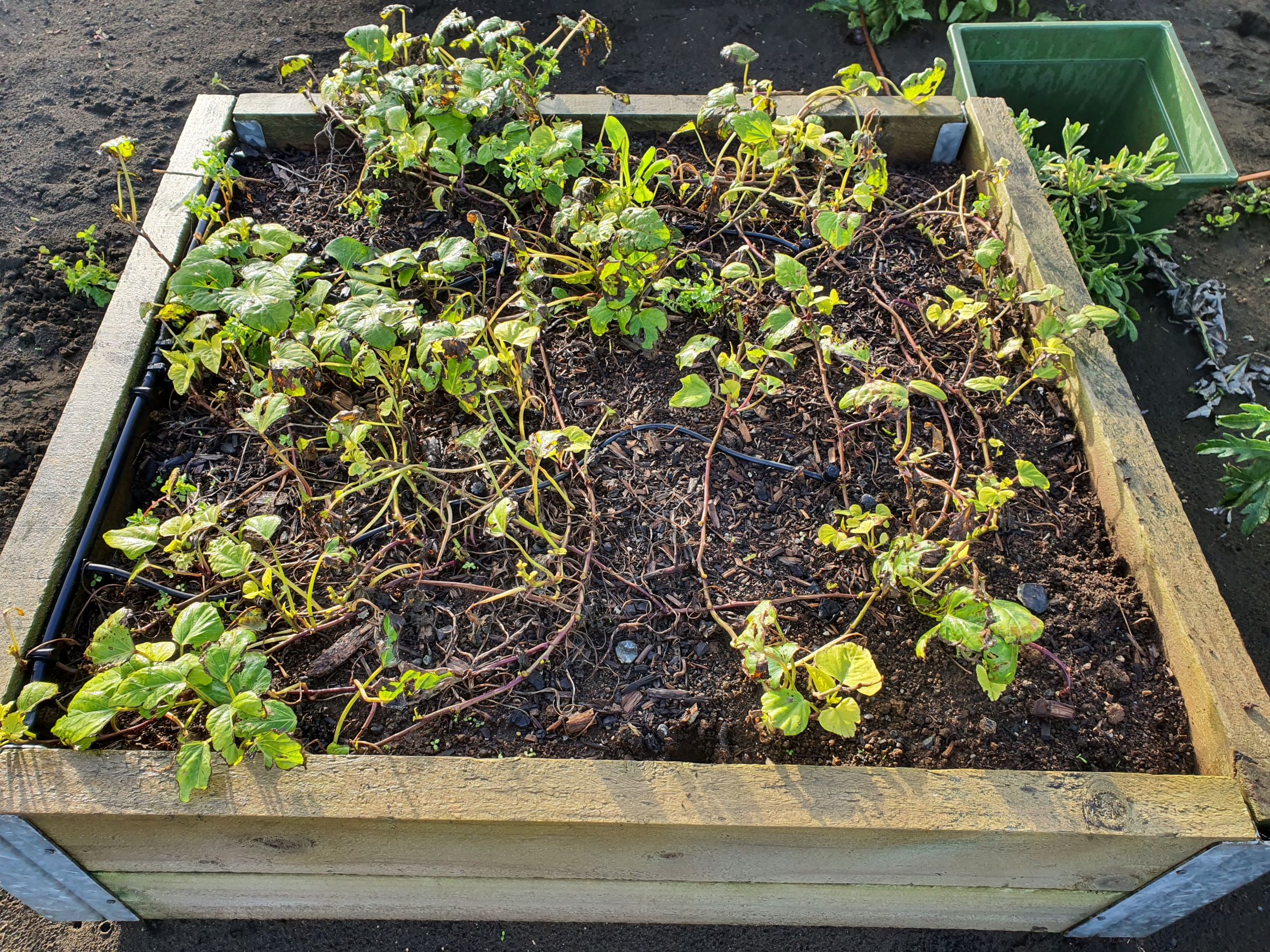 The once lush kumara leaves were quite bashed by the storm so the time had come to dig up. 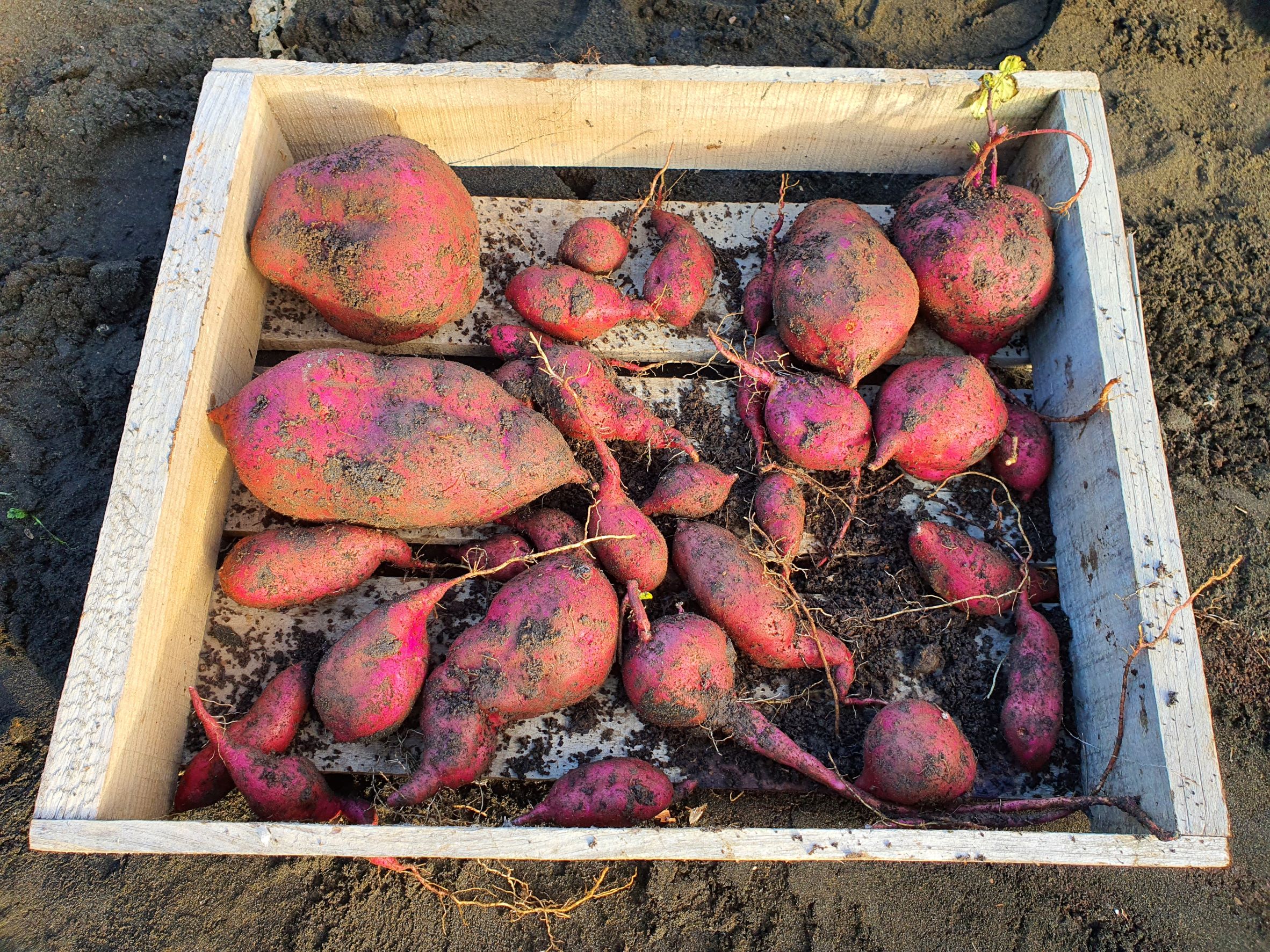 I’m pleased with this harvest – size wise, but next season I’d like to have a few more than this.

Then this morning, with the help of my Handy Helper, we decided to pull up the peanuts.  It was a good sized haul – about what I would expect based on what I have harvested in the past.  These were taken into the greenhouse to dry out a little before processing.  Then we moved on to the Kumara.  I wasn’t expecting much because the slips weren’t looking the best and they went in late.  But I was pleasantly surprised.  There were enough tubers big enough to get excited as we dug them up – although I did put the fork though the biggest one – which is so typical, and small ones big enough to still be considered worth eating.   Although it would have been nice to have more so next season I need to lift my game. 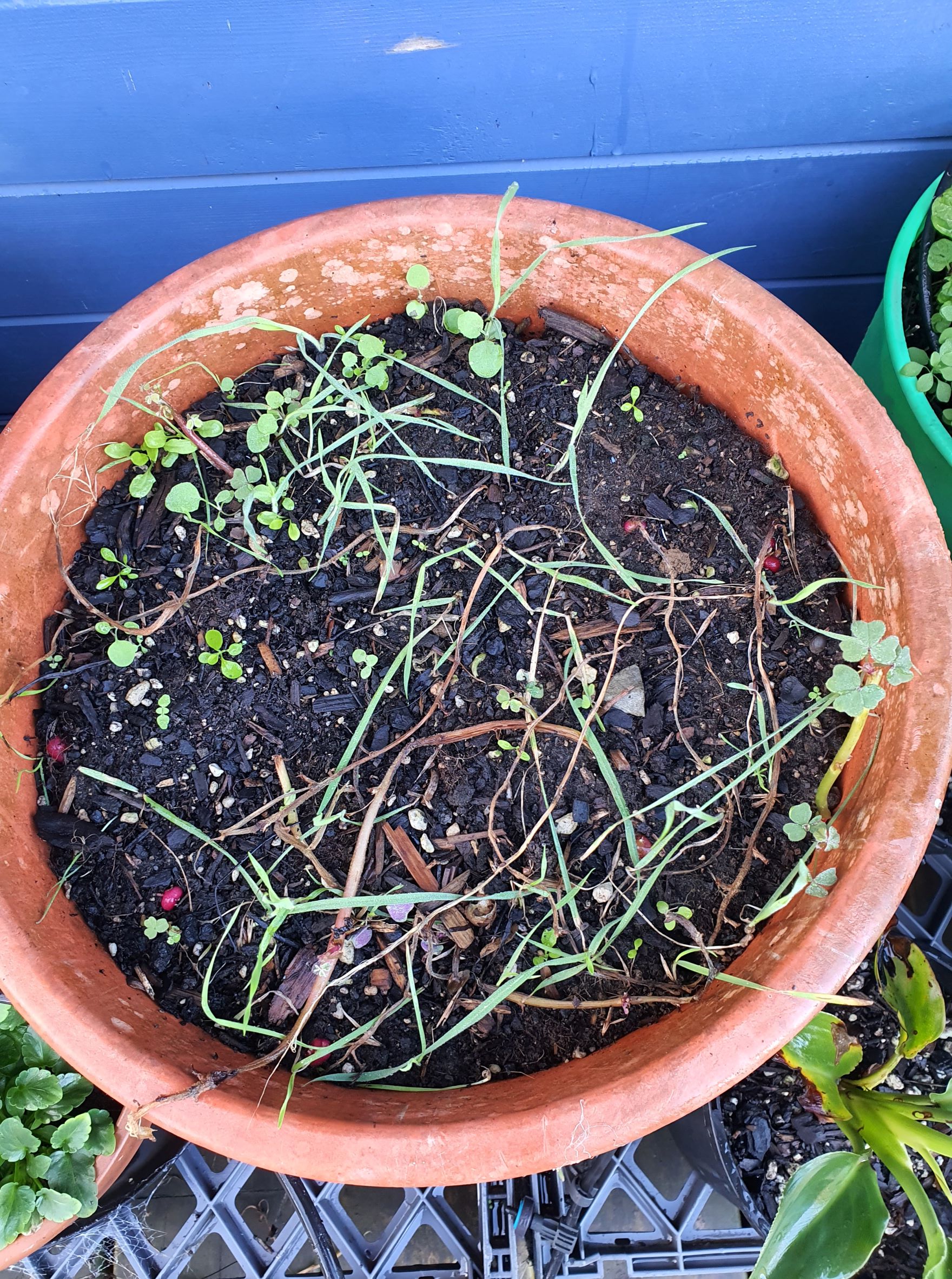 At this point there is the possibility and hope of a magnificent harvest. 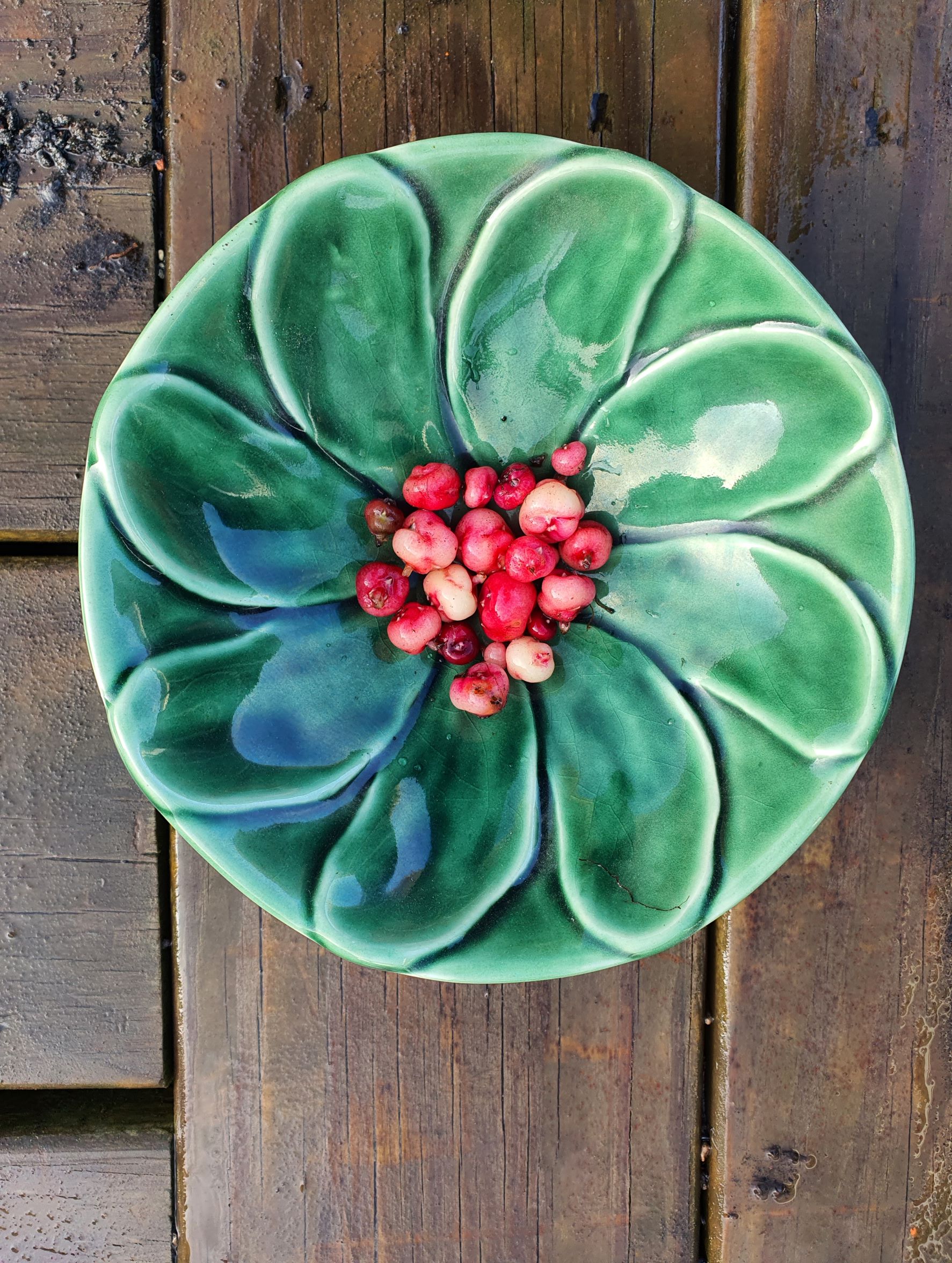 And then comes the reality check – hmmm…. Maybe we don’t speak of this again.

Ideally they should be cured by leaving them in a warm place to dry out to harden the skins and allow them to be stored for longer.  They also sweeten with curing as the starches convert to sugars.  The main suggestion was to leave on the soil to dry in the sun but unfortunately we are long past those days, so I need to find a warm place with good airflow for about a week.  I wonder how the family feel about having Kumara on the coffee table in the living room?  Then, if we had enough, they would be stored alongside my pumpkins in my shed in a cool dark spot with good airflow and checked often to make sure they aren’t going squishy.  I think once these have been cured they won’t even make it into the shed! 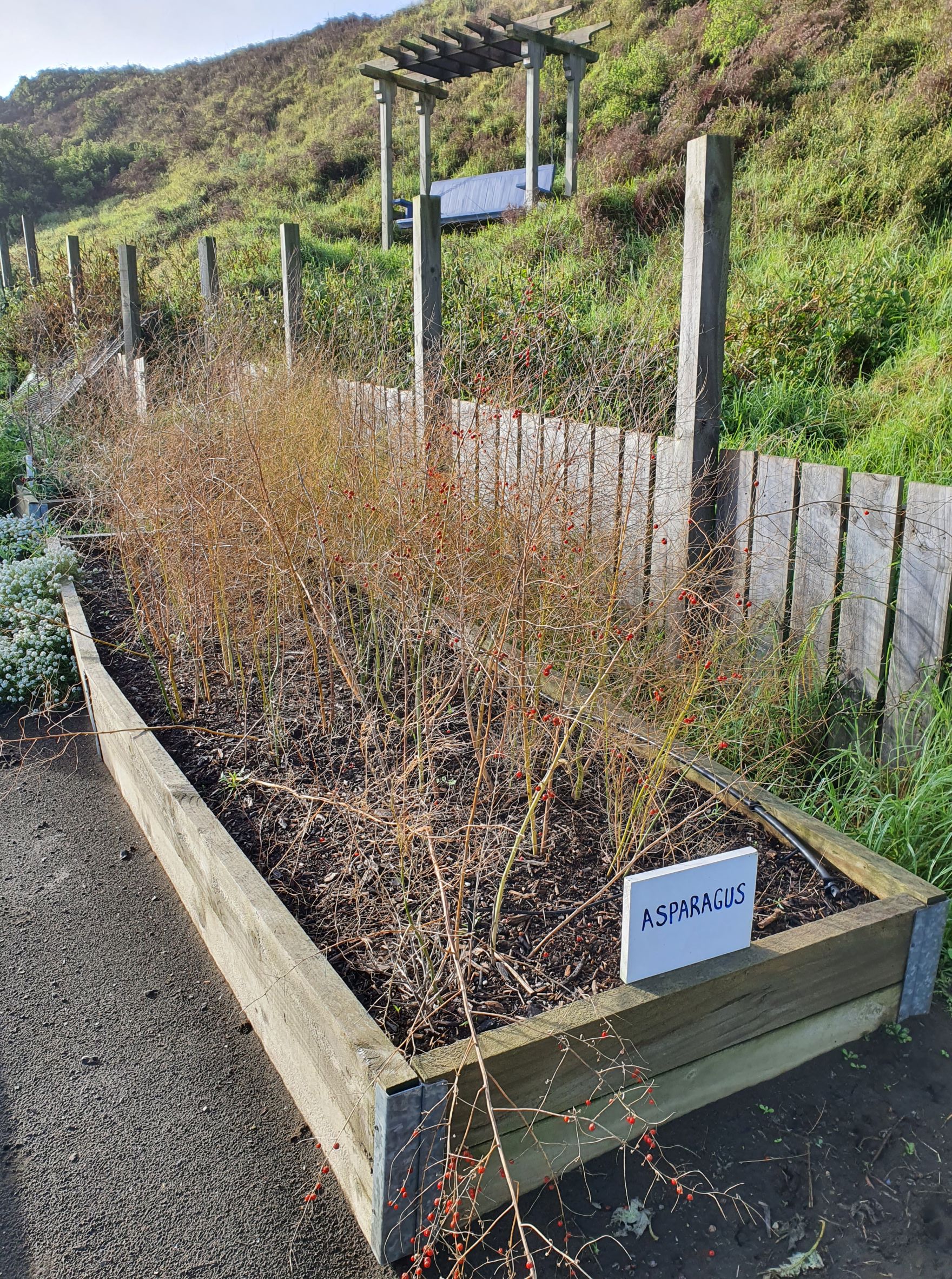 The asparagus fronds have turned yellow – the perfect sign to cut them back,

Then we emptied out the yams.   I have never really had a great harvest in all the years I’ve been trying to grow them.  However, I have persevered because maybe one day I will get things just right and enjoy a bountiful harvest.  With a negligible harvest in previous years in one of the 1 x 1m beds I decided it was a waste of space.  Especially as the kumara was being grown in large pots because I always forgot to make room in the garden for them.  So, I switched them around and gave the kumara more room in the garden, which could explain the better harvest and now I just need to improve my timings.    And the theory with the yams was if I grew them in a container I could control the conditions a little better and popped some of the biggest, fattest ones I could find into a big pot filled with potting mix and plenty of goodies to keep them happy. 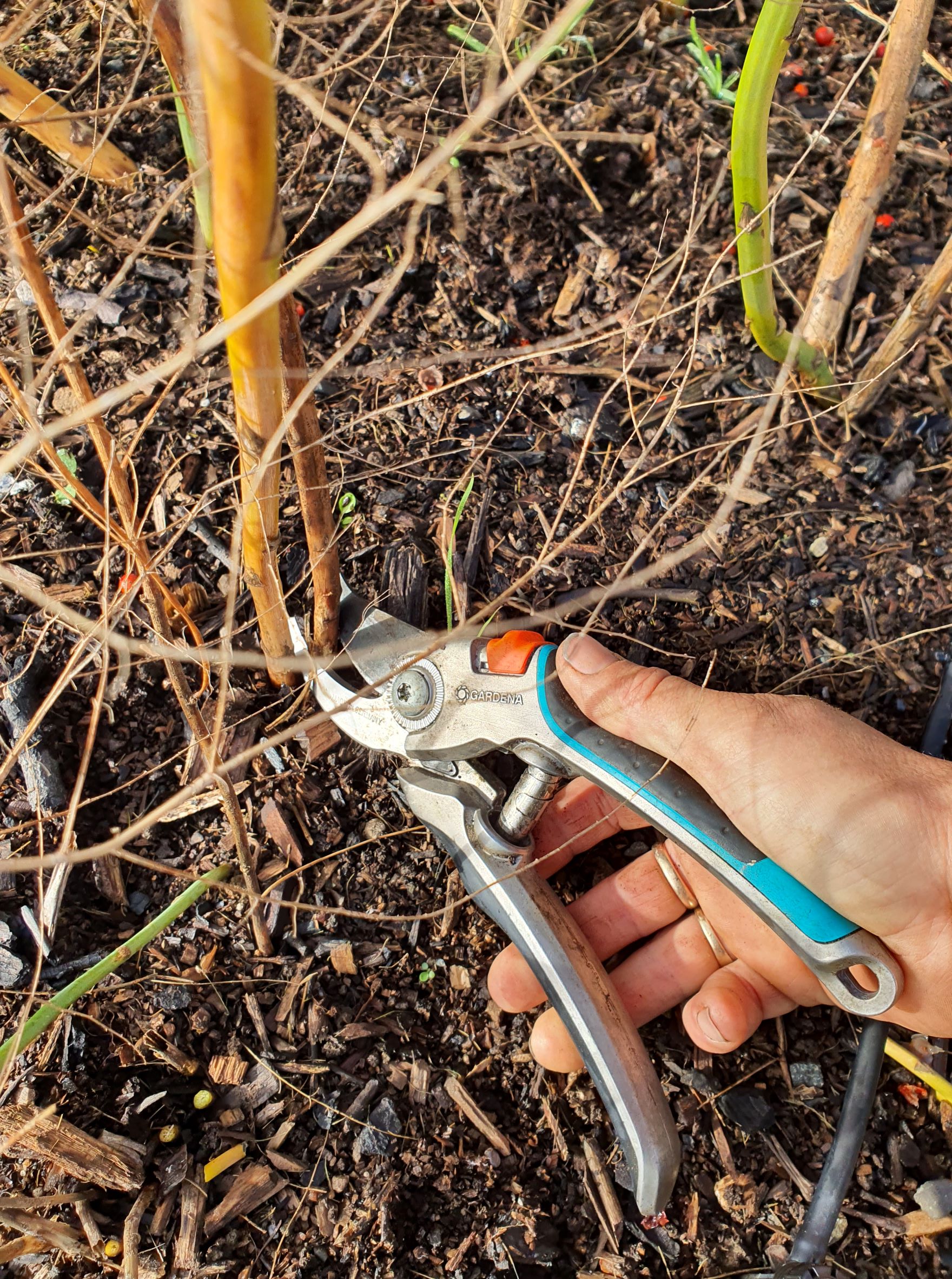 With sharp secateurs just cut them down at the base.

It turns out there is something they need to keep them happy, and I just can’t provide that for them.  They need a cooler climate than what I have to offer.  It was with much excitement we went digging through the soil to find a dozen or so teeny tiny pink balls that were collectively smaller than just one of the tubers I had originally planted.  I’ll still cook them up – and will enjoy every last morsel – I grew ‘em, I’ll eat ‘em! 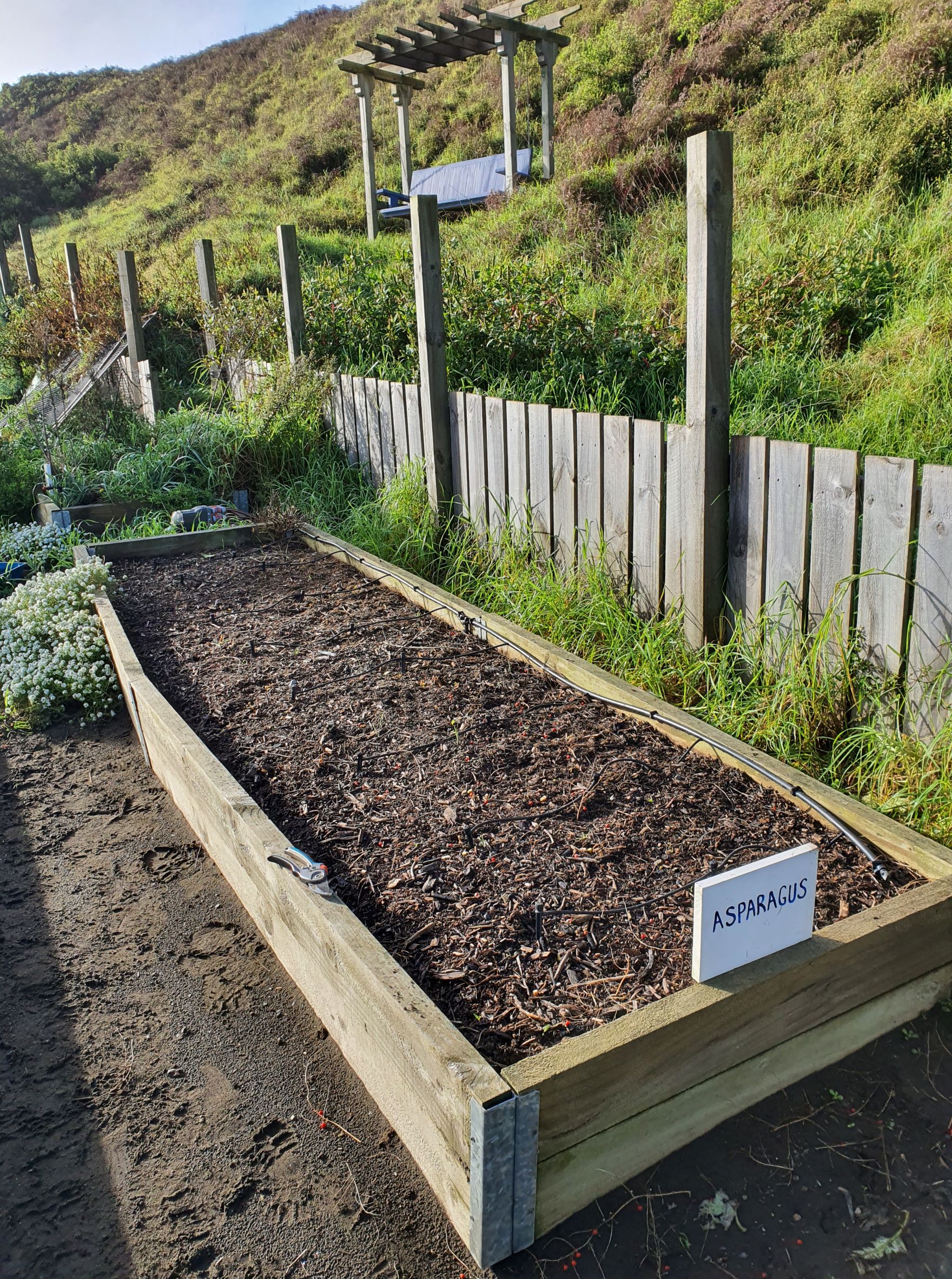 A nice topping of compost and other goodies and the asparagus is tucked up safe and sound for the winter.

But I think I have come to the realisation that after over a decade of trying, it is probably not worth trying again.  I gave it a good go, and if any of the seasons or growing conditions I subjected them to over the years resulted in a slither of hope then it would be worth continuing to try.  But with today’s harvest, even I’m not that optimistic.  I will miss the challenge of trying to grow them, but something else should take their place in the garden. 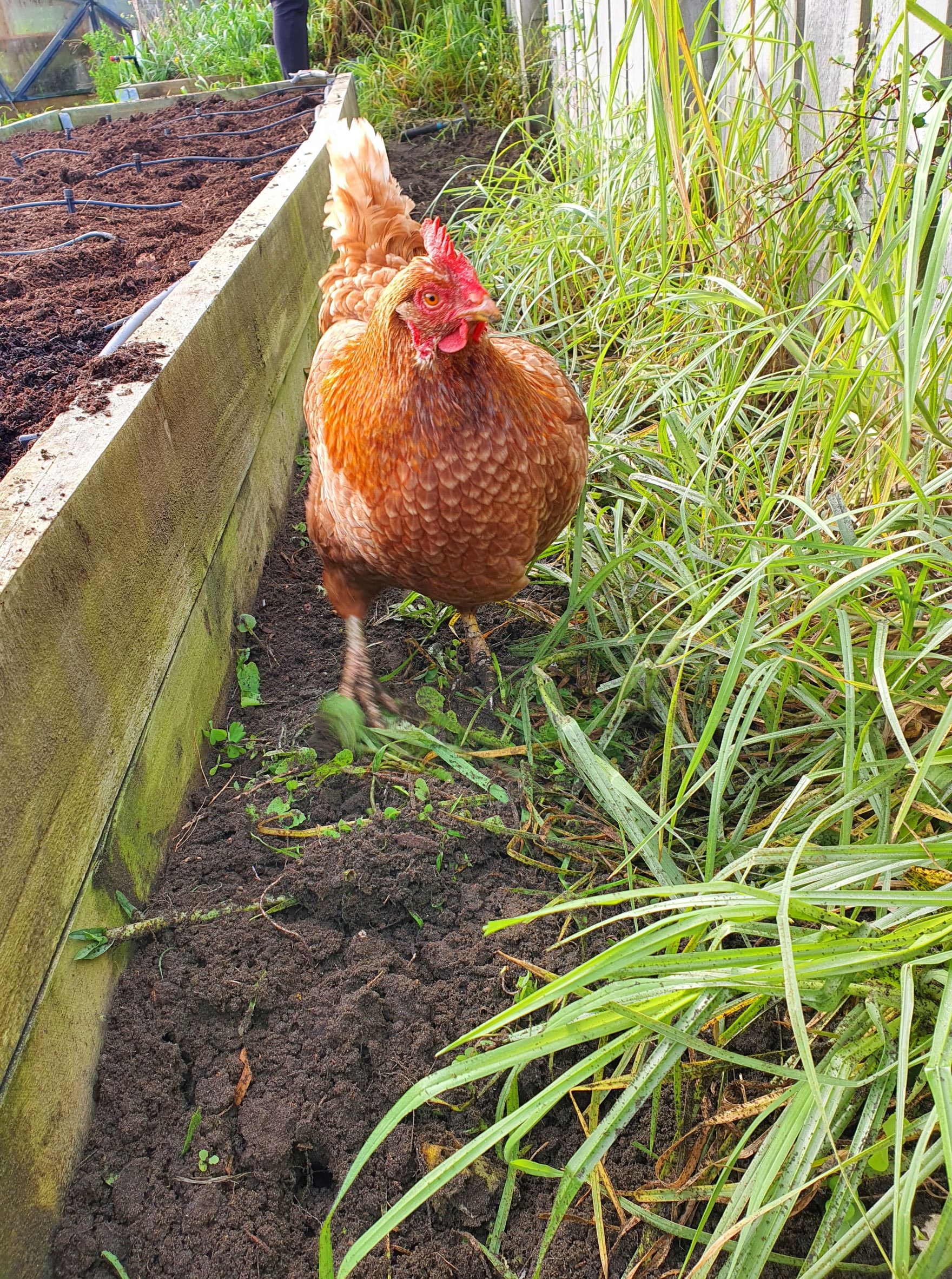 While clearing the fence line we got a little help from Turducken the Chicken. She’s a bit lonely as her last elderly friend died this weekend. So we will need to find some younger friends to keep her company.

Not wanting to end on a downer – my Handy Helper and I cut down the yellow asparagus fronds and popped some blood and bone and Yates Dynamic Lifter on the bed and tucked it in with a thick layer of compost ready for the new season.  We should see the first of the new season spears popping up in August! 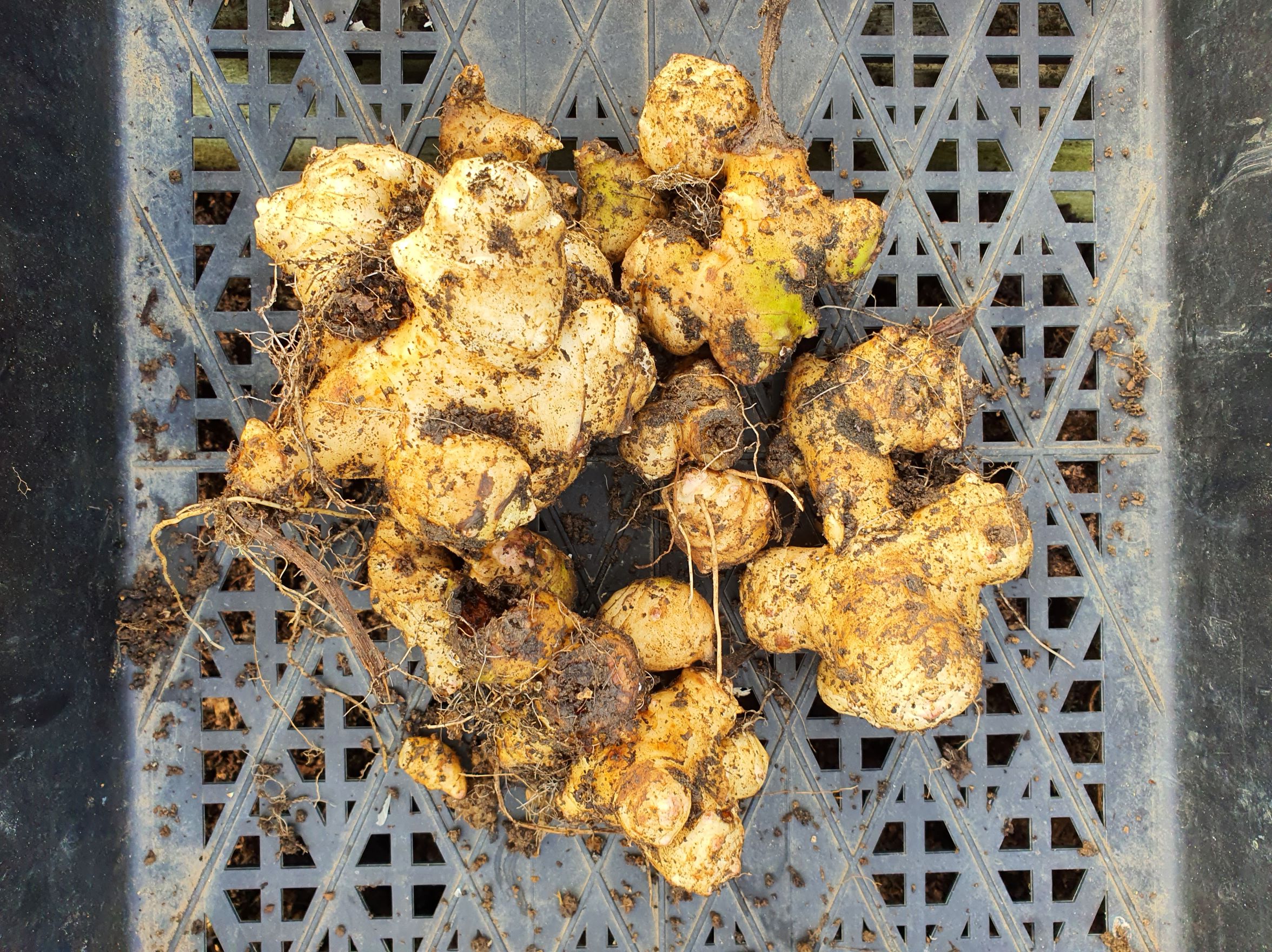 These are the only Jerusalem artichokes I could find. Hopefully they will go one to create a bountiful crop for next time.

Then we continued our quest to weed the fence line and in the process uncovered the neglected Jerusalem artichoke bed.  I just didn’t get to it last year, so it was a complete overgrown mess.   Now bearing in mind this is the crop they say plant where you want to have them forever because they are indestructible….  Well, it would seem I achieved the impossible.  The last time they were well managed I ended up selling my excess to the Goodness Grocer for a good price.  This time I found 4 good ones and a few tiddlers.  But the upside is the neglected soil was so soft and lovely and friable, so I just popped them all back in to regenerate my supplies with a promise not to neglect them again. 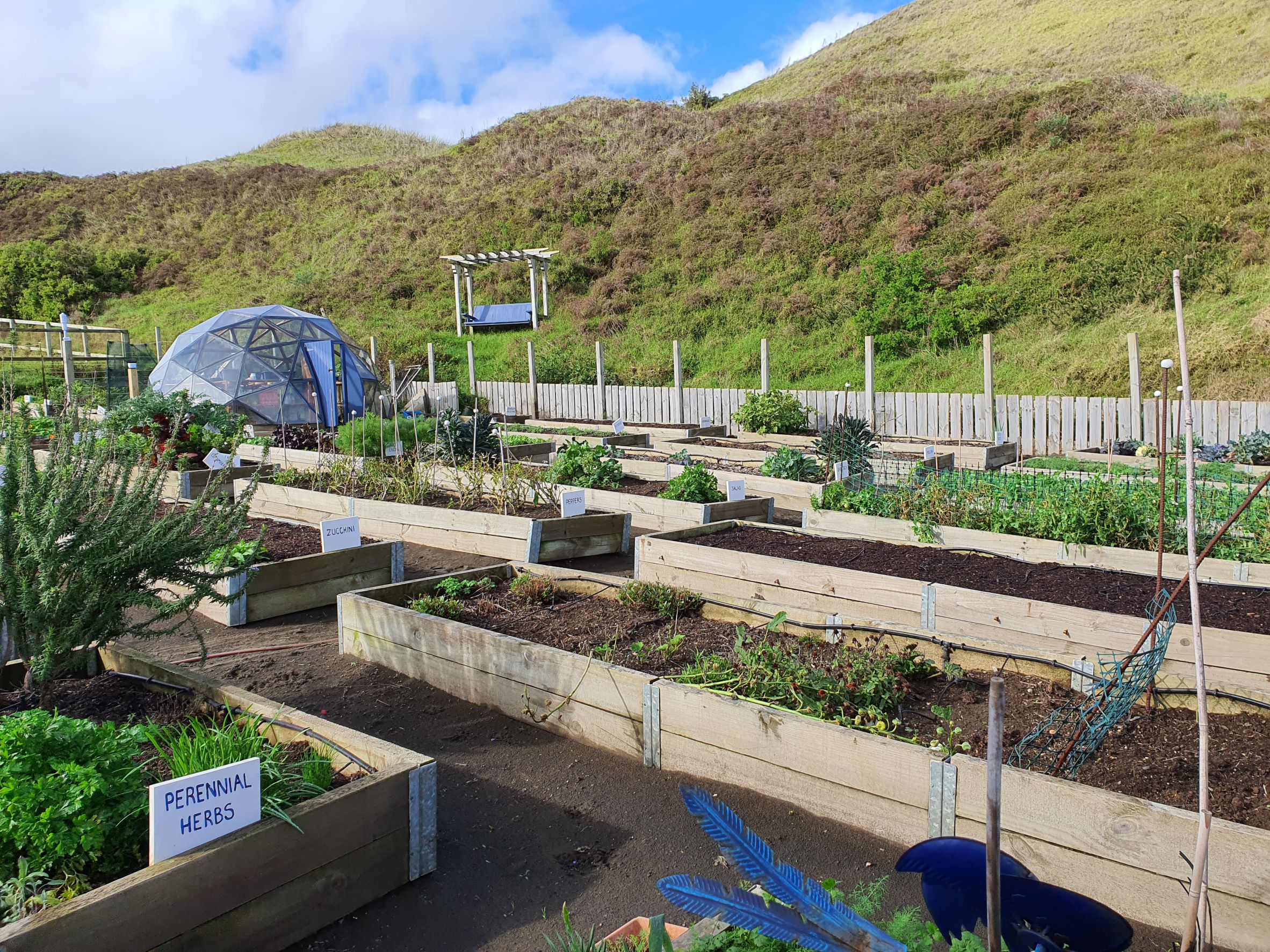 The view across the garden looks so much more in control now – especially with a clean fence line.

And that was the last harvest of the season – aside from carrots, cabbages, broccoli, Wong Bok, celeriac and a few other… ok, so there is still plenty to harvest from the cool season crops but that was technically the last of last season’s crops.

Come again soon – the weather is keeping us on our toes.

Sorry it was a bit long – I got over excited!

← I’m coming with you
Power is so overrated →

19 Comments on “Knowing when to stop trying”