I haven’t gardened in ages!

The last thing I did was dig over the garlic bed two weeks ago!  I haven’t even had a chance to check the “to do list” to see what I’ve not been doing.  Luckily it’s not as dire as all that as it is winter after all!  Two weeks of neglect in spring would be catastrophic.

When I haven’t been head down – bum up working away on my project (which is on track and three quarters finished), it’s been raining and yucky and all wintery so I guess that’s ok.  But the hardest thing is the weather all this week has been clear blue skies – that admittedly started with freezing crisp frosts and there was still a bit of a chill in the air all day, although nothing a pair of long johns wouldn’t take care of.  So while I was inside, working my fingers to the bone on my keyboard, I had half an eye on the sun drenched garden, and  I promised myself if I got to a logical break by the end of the week then I would reward myself with time in the garden.

Then when I woke up today, the day I had been working towards all week, was cold and wet.  WET?  That wasn’t on the radar…  I wouldn’t have been half as motivated if there was a big rain cloud on the weather chart.  If there was, then maybe I wouldn’t have worked as hard.  The good news is the sun is supposed to come back tomorrow and it’s a weekend so tomorrow it’s all on.  I shall sink my hands into soil – no matter how cold and claggy!   I shall even get Hubby the Un-Gardener to do some digging.  I’m sure he wont mind giving up his weekend to dig in the cold for me…

But amongst the cold bleakness of the day there was a wee ray of sunshine.  Brandy the Escape Artist Chicken’s babies hatched.  She had been hiding under the hedge with 12 eggs.  Today wandering about in the driveway were 6 cheeping egg shaped fluffy bums!  I have to say I am a sucker for baby chickens – they are too cute for words. 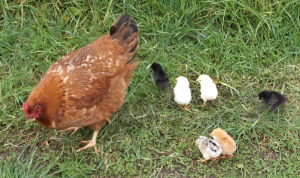 There were still 6 more eggs in the nest, but the driveway isn’t the safest place for babies to play so a made a nest in a box with hay and moved the eggs in to it.  Then I had to try and convince Brandy to bring the babies and follow me to the chicken coop.  That didn’t work so I tried to carry the box and the babies and get her to follow the sound of the peeping, but that didn’t work, she just frantically wandered around looking for her babies, so I set the box on the ground in the middle of the driveway and she climbed onto the eggs and the chicks disappeared into her feathers.  Then I carefully lifted the box and moved the whole family off to the coop.  After a huge feed of chicken food they have all settled in well.  A proud Dad and bemused aunts cautiously watched the new arrivals wondering where they all sprung from.

One thing I did manage to do was take my monthly photo.  It shows work has been done – but not much.  But then that’s winter for you.

Come again so – there’s going to be gardening going on!

← I’m supposed to be doing other things.
It’s the shortest day… Well I think it is… →

12 Comments on “I haven’t gardened in ages!”